An ambitious symposium considers how the bones of a ruined house can spark dialogue about memory, preservation and institutionalized racism. 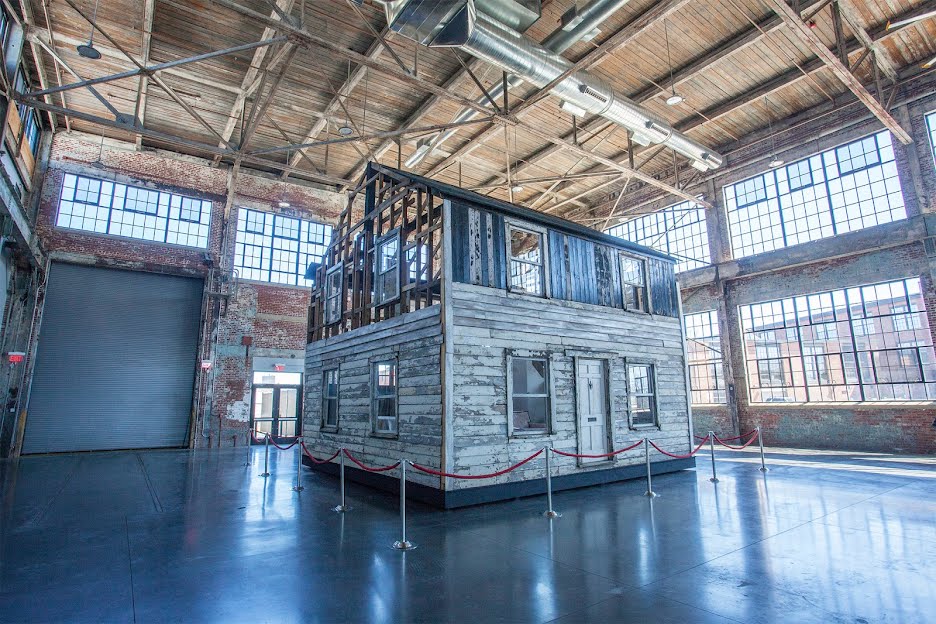 After being carefully dismantled, the Detroit home where Civil Rights activist Rosa Parks lived after leaving Alabama has been reconstructed inside the WaterFire Arts Center in Providence. | photo by Erin Cuddigan

Many Americans grew up with an inaccurate sense of Civil Rights heroine Rosa Parks, the black woman who sparked a year-long bus boycott in Montgomery, AL when she refused to move to the back of the bus in 1955. While history often paints her as meek and unassuming, Parks was secretary of Montgomery’s chapter of the NAACP and after defying local laws about bus segregation, was forced to flee the south to escape death threats. She relocated to Detroit, but later referred to her new home as “the northern promised land that wasn’t.”

The small house where Parks took shelter in the late 1950s with her brother, his wife and their 13 children is one of thousands that were slated for demolition in Detroit’s inner city. Its story reflects not only on the fate of the activist and her family well over half a century ago but on the plight of African-Americans across the country who continue to be denied access to “the American dream” of home ownership.

On Friday, May 18, RISD’s Interior Architecture department co-hosted a half-day symposium on the Rosa Parks House Project at the WaterFire Arts Center in Providence, where the house remains on view through June 2. The conversation began in 2016, when Parks’ niece Rhea McCauley bought the McCauley family home where Parks lived from 1957–59 for $500—thus saving it from demolition—and approached Berlin-based artist Ryan Mendoza about turning it into a memorial to her aunt.

During the symposium—cohosted by WaterFire founder Barnaby Evans and Interior Architecture Department Head Liliane Wong—a number of alumni and faculty members as well as former RISD President Roger Mandle joined historians from Brown University and other institutions in examining the house from the perspectives of art, preservation and memory. The artist behind the intervention—who deconstructed the house, shipped it to his home in Berlin and reconstructed it as a public installation before sending it to Providence—was unable to attend for medical reasons but contributed a powerful recorded statement to get the conversation started.

“Ultimately this is a project about memory,” says Mendoza—“about remembering a house you didn’t know you had forgotten. It’s time to question the mythology of our nation’s founding and stop denying the violence against the people it was built upon.”

But is this house—only partially rebuilt in the days leading up to the exhibition—the most appropriate memorial to Parks? By and large it’s the rich and powerful who determine what value an object is assigned, notes Becci Davis, a 2018 Artist Fellow at the RISD Museum. “It’s important for artists and ordinary people to take back that power and determine for ourselves what we remember and how we remember. This house addresses the lack of monuments for women and people of color as well as the myth of a single male Civil Rights leader.”

And where should the house ultimately rest? In the now revitalized Detroit neighborhood where it was originally built? In one of the Smithsonian national museums in Washington, DC? While panelists didn’t agree on a single answer, they note that the house is ultimately a conversation starter and that this conversation—about racism, redlining and America’s unfulfilled promise of equality—needs to take place on a national level. “Mendoza is bringing these issues to the fore—questions about who we are as a nation of diverse people,” says RISD graduate and University of Rhode Island Professor Bob Dilworth 73 PT. “And questions about the past matter for people who will live in the future.”

In terms of preservation, the house as it has been rebuilt could hardly be considered “original” or “authentic.” But as PennDesign Professor Randall Mason points out, “We would all benefit from a more generous definition of preservation, which is really about changing the way we collectively remember the past.” The typical house museum, the panel went on to discuss, memorializes only the wealthiest, most stable families. “Here in Providence preservation tends to be about the erasure of historically non-white communities,” adds Evans. “Redlining and gentrification should be part of the discussion.”

Panelist Sharon Conard-Wells, executive director of West Elmwood Housing Corporation on the south side of Providence, repeatedly brought the wide-ranging discussion back to the present. “White people don’t understand how US history affects us now,” she explains. For instance, unlike white veterans who had ready access to mortgages after World War II, Conard-Wells says that her “grandfather went to war, but as a black man he didn’t have the opportunity to buy a house and hand it down to his family.” Historically, other social welfare programs like food stamps have arisen due to the needs of rural white Americans as opposed to urban blacks. In fact, she says, “there isn’t one service in place today because black America needed it.”

A Call for Creative Activism