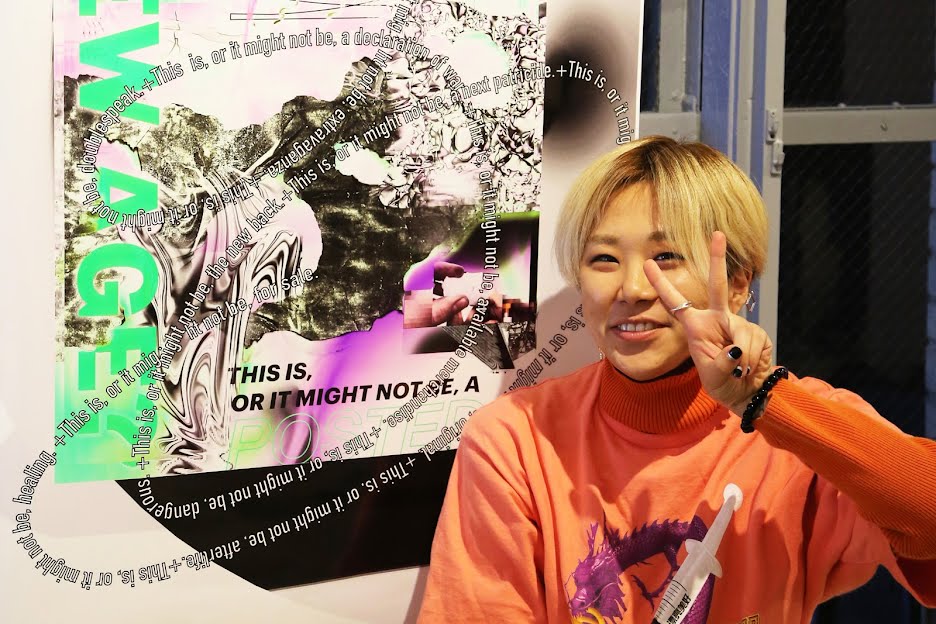 When Graphic Design senior Can Yang 18 GD first began following the American Institute of Graphic Arts (AIGA) on Instagram last year, she wondered if the organization might someday post an image of her work. Instead, a few months ago Senior Editor Emily Gosling reached out to her for an interview that led to a wonderful profile about Yang on AIGA’s well-read Eye on Design site.

Describing the emerging designer’s work as “instantly beguiling,” the piece praises her “gorgeous juxtaposition of Chinese characters and Roman lettering. Yang’s mode of expression is one that veers neatly between sincerity and playfulness,” Gosling goes on to point out. “Her projects frequently marry autobiographical elements with historical and theological investigations, as well as musings on wider ideas like generational differences or failure.”

Yang first came to RISD from China in 2013 to attend the summer Pre-College program, where she focused on sculpture. Floored by the experience, she applied for undergraduate admission the following year. When she arrived as a Foundation student, she initially expected to major in one of the fine arts, so surprised even herself by opting for Graphic Design instead.

“I like painting and using my hands, so it was a big jump,” says Yang. “But I wanted to push myself to try something that was brand new to me. Before I chose Graphic Design, I didn’t have any digital skills—I didn’t even know how to use Photoshop.”

As Yang picked up the tools of the discipline, she began applying them to her unique point of view, working with faculty members and other students to develop and hone her visual language. “Can has a very personal and unconventional design style,” says Graphic Design Department Head Lucinda Hitchcock. “She is fearless in the way she considers form, language and materiality, and blends languages and cultures seamlessly in her work.”

The admiration goes both ways. Yang appreciates Hitchcock’s generous feedback and says “she’s always trying to push me further.” The open dialogue she’s able to have with all of her professors took some getting used to, the senior adds. “In China you are supposed to look humble, nod your head, agree with your teachers,” she explains. “Here I learned to discuss my work—to jump in and share my point of view.”

Yang says that all of her work incorporates a mix of Eastern and Western motifs. Her Failurism Manifesto, for example, mixes China’s national yellow with millennial pink and reflects on the I Ching as a tool for divination. It also celebrates the notion of learning through failure—a core tenet of the pedagogical approach at RISD.

“Through failure we find new empathy, intimacy and expression,” says Yang. “We should celebrate glitches, bugs, application errors, system crashes, clipping, aliasing, distortion …. No perfect work can be a masterpiece.”

As her RISD experience draws to a close, Yang is looking forward to returning home to China and selling her zines and artist’s books at art book fairs like the newly created Unfold in Shanghai. If all goes according to plan, she’ll take a bit of time off and then pursue an MFA at the Royal College of Art in London, where she hopes to combine graphic design and other mediums and looks forward to the challenge of adapting to life in yet another culture. “I like things that are tough,” she notes. “Struggling is the only way I can push myself forward.”