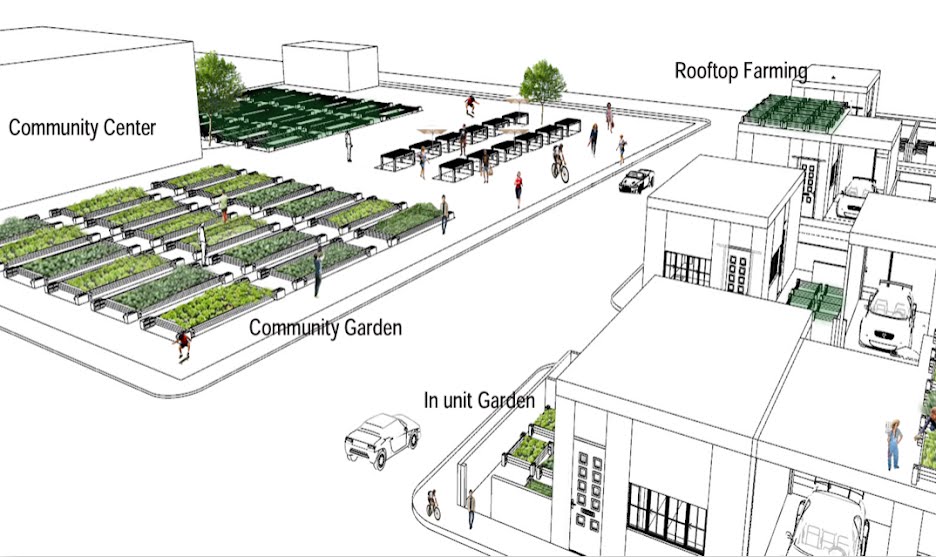 Recent Landscape Architecture alumni Siyi He MLA 17 and Yixin Ren MLA 17 are among the runners-up in this year’s domestiCITY design competition in Atlanta, GA. The jury considered 189 entries from more than 15 countries and awarded He and Ren a $20,000 prize for their proposed mixed-income housing complex incorporating multiple community gardens.

“The winner of the competition is a well-known firm with an international practice in urban design,” notes Department Head Emily Vogler. “Yixin and Siyi are the only landscape architects to place, so this is a really amazing accomplishment.”

In developing their proposal, He and Ren attempted to foster livability and community health by considering the site’s proximity to the BeltLine—Atlanta’s groundbreaking network of transportation lines and city parks scheduled for completion in 2030—as well as the city’s bicycle system. With that in mind, they included a bike path that would provide residents with access to shops, restaurants and public parks.

Proposals were judged across four primary categories: architectural innovation, architectural programming, economic feasibility and project replicability. The physical redevelopment of the site will ultimately serve as a built prototype for affordable housing solutions along under-developed commercial corridors in Atlanta and in other rapidly growing population centers throughout North America.

He and Ren's entry will be on view in Atlanta from March 12 through April 26 along with the winning proposals.

Landscape Architecture Critic Adam E. Anderson MLA 12 raised seed money and led a team of volunteers to bring a joyous vision to life on the edge of RISD’s campus.

Victims of human trafficking in Louisville, KY are benefiting from life-changing opportunities made possible through an innovative startup called Anchal.