This year’s Witness Tree studio challenged students to build wooden objects reflecting on the legacy of John, Abigail and John Quincy Adams and to consider how slavery shaped the US. 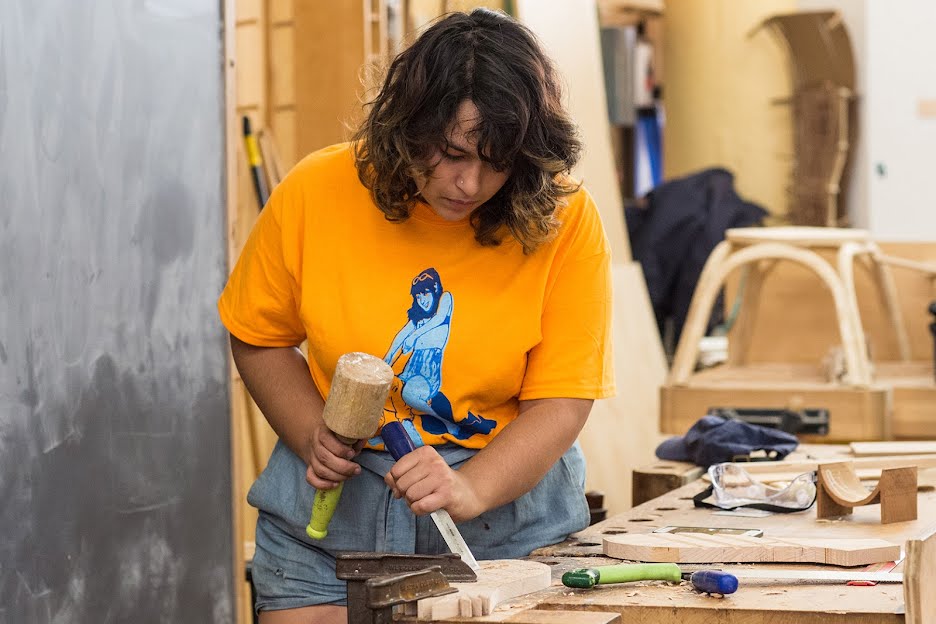 Unlike in the past, this year materials came not from a single 200 (or more)-year-old tree that has fallen, but from several different species of limb wood collected at Adams National Historical Park in Quincy, MA. The park encompasses the former estate of second US President John Adams, his wife Abigail and their son, the noted abolitionist and sixth US President John Quincy Adams.

The class focused on three aspects of the Adams’ story: founding father John’s concerns about the consolidation of power among wealthy elites; the role and rights of women in Colonial times; and John Quincy’s lifelong (and, of course, unsuccessful) attempts to abolish slavery in the US. Students researched these topics and related issues—such as the gag rule that kept Congress from even discussing abolition until 1844—and made objects commenting on each issue.

“The legacy of slavery continues to influence our economy and society on many levels,” notes Broholm. “In terms of class debates and group critique, it’s a raw wound that’s still difficult to discuss.”

Senior Odette Blaisdell 18 SC drew inspiration from a diagram Cavicchi shared representing patterns of forced migration among enslaved people from West Africa in the 17th and 18th centuries. At the final group critique on May 15, she presented a grid-like structure built of wood and treated with primer, glue and steel dust to resemble an iron grate.

“It’s a complex piece, but slavery is a complex issue,” Broholm said as he studied Blaisdell’s work. “I see it reflecting the deliberate nature of slavery as an industry and the ways it was interwoven into the founding of this country.”

Dana Le, one of three Brown students enrolled in the class, approached her final project from the perspective of an enslaved person seeking freedom. She created a wooden bench with a top that hides a subtle map of The Underground Railroad, the network of individuals and safe havens for moving fugitive slaves north. “This is my first RISD class, and I’ve been able to apply a lot of what I’ve learned at Brown—especially research techniques—to these projects,” she says.

As part of the final crit, the class debated the pros and cons of removing, replacing or reinterpreting Confederate monuments still standing in public spaces across the US. Visiting critic Caroline Kleinath, deputy superintendent at Adams National Historical Park, sees Le’s bench as an appropriate counterpoint to remaining Confederate monuments.

Fellow Brown student Kirby Engelman brought the conversation even closer to home with her clapper-less bell. Carved in its wood are the numbers 1838 and 272. In 1838, she explains, Georgetown University sold 272 enslaved people to keep the institution financially viable. Nearly 200 years later, administrators are still debating how to make reparations to their descendants. The bell’s silence, she notes, mimics the silence of officials at Georgetown and many other East Coast colleges that haven’t yet grappled with historic realities like these.

This type of visual metaphor is also beautifully employed by juniors Quincy Kuang 19 ID and Harry Cassell 19 FD, who both created wooden gavels reflecting on the gag rule. Cassell’s gavel is rendered silent via upholstery made of cotton, a cornerstone of the US economy in Colonial times and farmed in large part by enslaved people in the south. “It also relates to the performative white ally-ship of the present day,” she noted in the crit, “with people making the motions but not really attempting to change things.”

Kuang’s gavels are absurdly disproportional, one featuring a huge head and tiny handle and the other ridiculously imbalanced in the other direction. “This object speaks to the weight of compromise and how it inhibits the ability of government to function,” noted Cavicchi as he handled the oversized gavel. “I also appreciate the element of humor.”

“Of course I’m not saying there’s anything funny about slavery,” Kuang interjected. “But the ridiculous proportions of the gavel reflect on how ridiculous it was for government leaders to overlook this issue for so long.”

Work by students in this spring’s Witness Tree studio is being exhibited at the Martin Van Buren National Historic Site in New York state.