Redefining the Meaning of Monuments 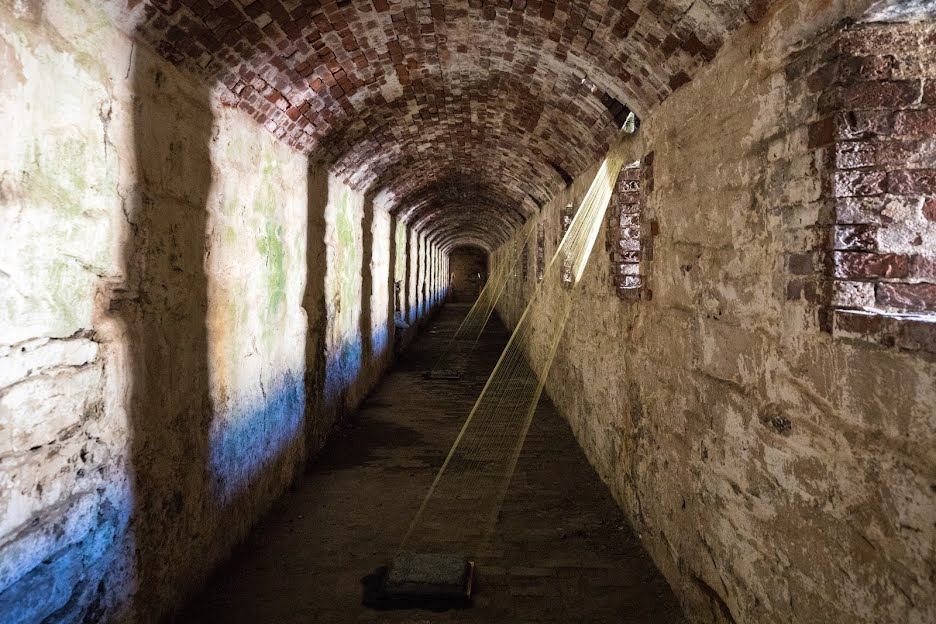 Junior Leah Marchant brings to light the presence of Fort Adams’ long-dead soldiers in a piece called Within Passages, Within Time.

How do the edifices we choose to preserve reflect the values of our society and shape our collective memory? How can we use them today to spark ideas and conversation about where we came from and where we are going?

Students in a multidisciplinary fall studio co-taught by Associate Professor of Textiles Mary Anne Friel and Sculpture faculty member Chris Sancomb 93 SC responded to such questions in creating Redefining Monument: Contemporary Reflections on Fort Adams, a site-specific exhibition on view at the historic Newport, RI fort from December 3–13. With studio support from RISD’s Academic Enrichment Fund in cooperation with Fort Adams Trust, students worked individually and in pairs to create sculptural installations reflecting on the fort’s history and the people who once inhabited it.

“My goal was to uncover overlooked histories and forgotten people,” notes junior Leah Marchant 20 ID, whose moving installation Within Passages, Within Time “is intended to bring to light the presence of soldiers who once stood guard within the walls of Fort Adams” so that their “experience, efforts and presence [is no longer] kept in the shadows.” Clusters of carefully strung hand-dyed nylon filament mimic shafts of light pouring in through the openings in the centuries-old brick wall—openings through which soldiers were trained to fire on invaders.

Stepping away from Marchant’s intervention and walking through an eerie, low-ceilinged tunnel, visitors come across another piece focused on soldiers of the past: Tension, by grad student Chia-Chi Wu MFA 19 CR. Made up of laser-cut mirrored Plexiglas threaded with red monofilament, the work gives form to imagined bullets flying in through the windows. At an afternoon critique that included Fort Adams historians Bob McCormack and Steve Marino, Friel described it as “the invisible revealed,” and Sancomb likened it to “a forensic diagram or a moment frozen in time.”

Other works in the exhibition focus less on the soldiers and more on the US military in general. Rungs of Freedom, for example, by grad student Wes Sanders MDes 19, takes aim at military invasions since the formation of the US, presenting charred ladders with a rung representing each country in which the US military has intervened over the years. Positioned outside in the SW Exterior Ditch, the piece, Sanders explains, attempts to “subvert the narrative of progression” in its reverse-chronological presentation. At the critique, multimedia artist and visiting critic Marisa Williamson admired the piece and noted that ambiguities in chronology and other details add to its impact, observing that there are “lots of ways to illustrate futility.”

Grad student Sebastian Arroyo Hoebens MFA 19 FD didn’t pull any punches with his In Guns We Trust, a massive golden bullet crushing a pile of burnt books. Illuminated only by natural light filtering in through a small opening in the ceiling above, the piece requires a level of trust from viewers, who must make their way carefully into the damp and darkened chamber and allow their eyes to adjust to the dim light. Sancomb was taken by Hoebens’ lighting approach and the way he “created a slow read.”

Another piece that took advantage of the natural properties of the site—in particular, the constant wind off the bay—was Ida’s Dream by grad student Smriti Kapoor MA 19. Taking an amplified approach that incorporated an antique bed, mounds of nautical rope, numerous meticulously dyed hanging textiles and an audio recording on loop, she brought to life the story of Lime Rock Lighthouse keeper Ida Lewis, who took over her father’s post as a 16-year-old and rescued 18 stranded mariners (including several soldiers stationed at the fort) between 1858 and 1911.

“Fort Adams is a historic site rich in cultural, political and environmental material to draw on and respond to,” says Friel, who also co-taught the course with Sancomb in 2016. “The student work is so varied; each piece activates the space in reverent and unexpected ways.”