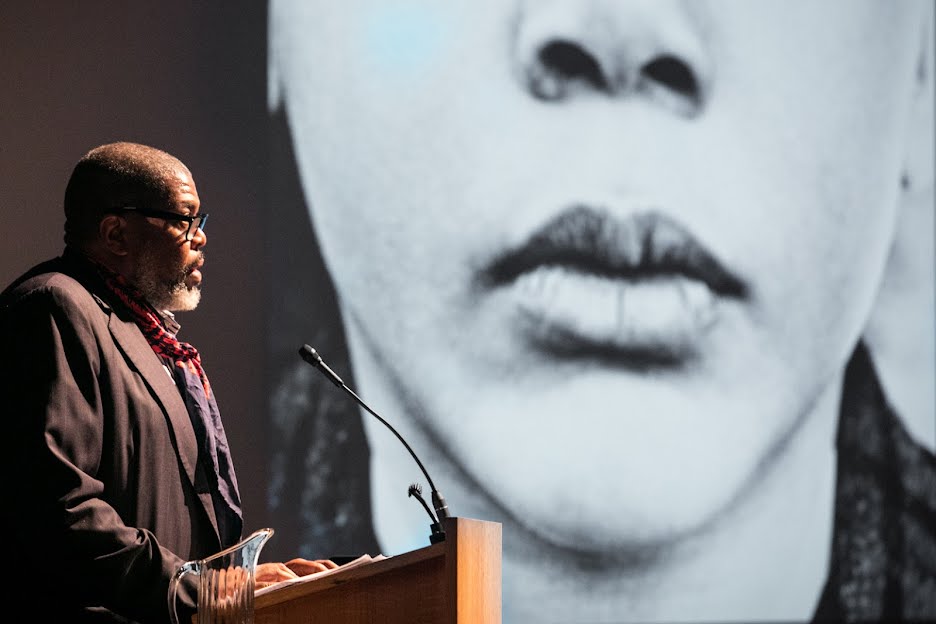 During his talk in the RISD Auditorium, Als read from selected essays he has written for The New Yorker, which began publishing his lyrical prose in 1989. Delivered in his melodious voice, they sounded like pure poetry.

Als began with a short piece inspired by the recent spate of sexual misconduct allegations in the news and America’s longstanding complicity in “ignoring what should not be ignored. This is America,” he said, “where we like to forget, but don’t.” He noted that our terrible silences (in response to everything from the AIDS epidemic to queer-bashing to systemic racism) are ultimately challenged by the artists among us, who dare to change the discourse.

“For, if they take you in the morning, they will be coming for us that night,” Als intoned. He was quoting An Open Letter to My Sister, Angela Y. Davis by the late, great writer James Baldwin, whose influence on the young Als was enormous. As a kid growing up in Brooklyn, he confessed, he frequently ditched school to pore over art books at the public library. He was particularly enthralled by Nothing Personal, a 1964 collaboration between Baldwin and celebrated photographer Richard Avedon.

Affectionately referring to the duo as “Dick and Jimmy,” Als devoted the rest of his talk to Crime and Punishment, his essay about their lifelong friendship and the impact of their work on his life. Baldwin and Avedon met in high school—a black man and a Jew, both outsiders peering in at mainstream American culture. Like Als, they both were raised by distant, difficult fathers and loving mothers.

Nothing Personal features Avedon’s piercing black-and-white portraits, some of which Als showed during his talk: the intense gaze of Martin Luther King III as a boy thrust into the spotlight, a deflated Marilyn Monroe whose dedication to projecting her public persona had momentarily flagged, the sexy but menacing pop star Fabian, described by Als as “the essence of male arrogance.”

In a friendly Q+A session after his reading, Als discussed his beginnings as a thinker and a theater critic attending performances with the late poet Owen Dodson, who would become his mentor. He bantered with a RISD student who praised his Instagram account but knew nothing about the advent of Polaroid photography. “Instagram is just an excuse for not writing,” he quipped, commenting on their age difference by adding, “I was already drunk and on unemployment when you were born.”

Als went on to recount his early, “uncensored” submissions as a freelance writer and his start at The New Yorker. He was offered a job by famed editor Tina Brown but was so awed by her presence (and confused by her accent) that when she told him to “see the money people,” he left the office and ended up working for Vibe for two years. When he next saw Brown, she was more explicit: “Hilton, I’m hiring you.”

Making Something from Nothing

Artist and urban interventionist Theaster Gates talks about the transformative power of art at the 2015 Gail Silver Memorial Lecture.