In the face of a natural disaster, what is the role of an artist or designer? When earthquakes erupt or tsunamis strike thousands of miles away, how can creative thinkers and makers best respond?. 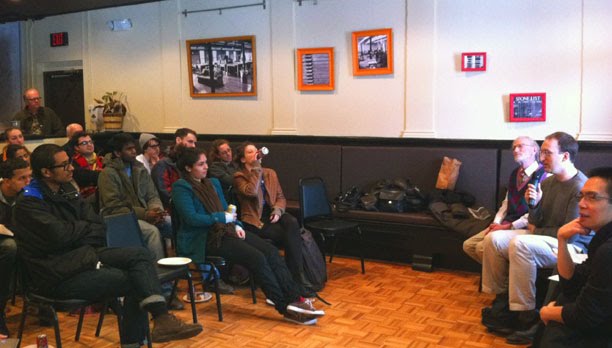 In the face of a natural disaster, what is the role of an artist or designer? When earthquakes erupt or tsunamis strike thousands of miles away, how can creative thinkers and makers best respond?

RISD students, faculty and staff searched for answers to those questions at a campus gathering on March 22. Led by PresidentJohn Maeda, the discussion included five RISD and MIT faculty panelists, along with renowned Architecture for Humanity co-founderCameron Sinclair, who participated by phone from the West Coast.

In a conversation that moved from principles of Japanese aesthetics to the shelf life of radioactive isotopes to the problem of media overload and disaster fatigue, participants across a wide range of disciplines offered perspectives to help the campus community process and better understand Japan’s recent triple disaster (earthquake/tsunami/radioactive leaks). Talk also centered around the role artists and designers can play in helping to deal with this and similar catastrophic events.

Whether the crisis is like those in Japan, Haiti or New Orleans, Sinclair advised designers to wait, listen and understand the needs of the community directly affected by the disaster. “You can have a fantastic plan, but if you present it too quickly, it comes off as too abrasive and people will react poorly,” he noted. Too often communities coping with disaster on an enormous scale “are being forced to decide on the future of their city without feeling like they’ve even had a discussion about their immediate needs.”

Landscape Architecture ProfessorLili Hermann, who has worked in disaster zones in Southeast Asia, echoed Sinclair. “In the midst of disaster, we don’t really know what’s needed,” she said. “For artists, this is a time to bring public awareness to the disaster. RISD students have a unique ability to visualize what has happened and help those who cannot be there to better understand it.”

Right now, one of the most vital ways artists and designers can help with the situation in Japan is simply by joining the worldwide response, sharing their compassion and donating funds for recovery. “At this point, we have to address survival issues,” noted Philosophy ProfessorYuriko Saito. “That’s something we can do as global citizens.”

Michael Short, a postdoctoral associate in Nuclear Science and Engineering at MIT, offered vivid memories of standing inside a nuclear power plant in Japan when a 7.2 quake rocked the facility. Surrounded by Japanese colleagues, he was the only one to flinch – a powerful statement about the acceptance of earthquakes as a natural part of life in this seismically sensitive country. “I thought I should hit the floor and protect myself, but everyone else was saying, ‘What are you doing?’”

Short noted that one of the most important roles RISD students can play is to help accurately explain the threat of radiation and counter the unfounded fears most people have about leaks and other potential accidents associated with nuclear power plants. “As engineers, we can make all the instruments and new technology we can think of,” he said. “But it won’t make much of a difference if people aren’t receptive to it.” That’s where artists and designers can help – as visual translators and communicators able to humanize complex information.