Resurfacing the Legacy of Slavery

In a public pop-up installation in May students showed powerful work that surfaced the legacy of slavery in Rhode Island. 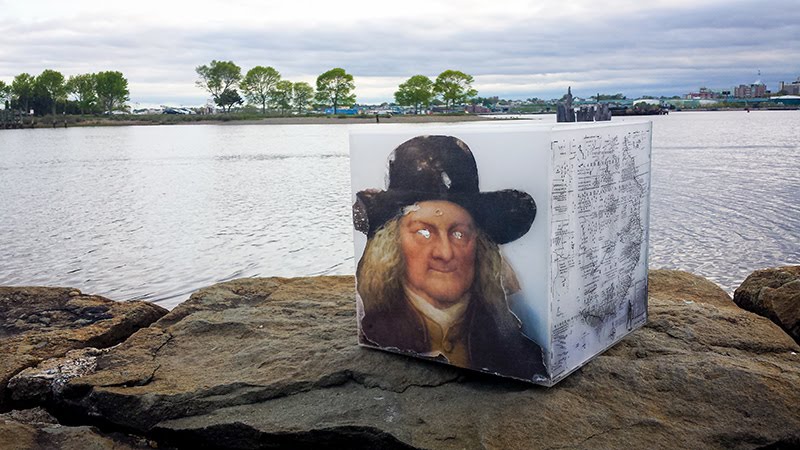 A light-box sculpture by Jay Simple MFA 18 PH was among the works featured in a public exhibition addressing the legacy of slavery in Rhode Island.

In Atlas of Enslavement, a public pop-up installation on Friday, May 12, eight students showed powerful work that surfaced the legacy of slavery in Rhode Island. Their performance pieces and 3D works in historically significant locations throughout Providence stood in resistance to “official” narratives about prominent Rhode Islanders who profited from the slave trade, while also celebrating the lives of the African and Native American people who were enslaved.

The multi-site installation was the culmination of Rhode Island and the Rememory of Slavery, an interdisciplinary course led by Liberal Arts faculty members Sheida Soleimani and Elon Cook. Artists made research-based work inspired by the life of an individual enslaved in the area between 1700 and 1840. “This has been a beautiful space for investigating a history that we were all deeply connected to,” Zoe Scruggs 19 PT said about the class, noting that all of the participants are people of color.

Many of the works on view emphasized how the legacy of slavery informs the present. For instance, Joshua Foltz 19 SC connected the story of Edward Abbey, a child who worked on the slave ship Sally, to the ongoing marketing of Newport cigarettes to young African Americans while Brandon Simmons 18 PT hid the silhouette of Native American slave Olaudah Equiano in a newsprint collage that hints at the persistence of unemployment and economic inequality for people of color. Simmons said the the exhibition gave him and others the opportunity to tell the story of those who “weren’t allowed to have a narrative” when they were alive.

Installed at the former site of a candle factory, a light-box sculpture by Jay Simple MFA 18 PH invited viewers to look past a portrait of Moses Brown, the abolitionist, to see Moses Brown, the slave owner, through the lens of Thomas Brown, a man who was enslaved by Moses and his three brothers. In a statement about the work, Simple writes that the ideology of slavery remains a matter of urgent struggle today—for the descendants of both slaves and those who enslaved them.