Alumni, parents and friends come to campus for an inspiring look at creative energy in action. 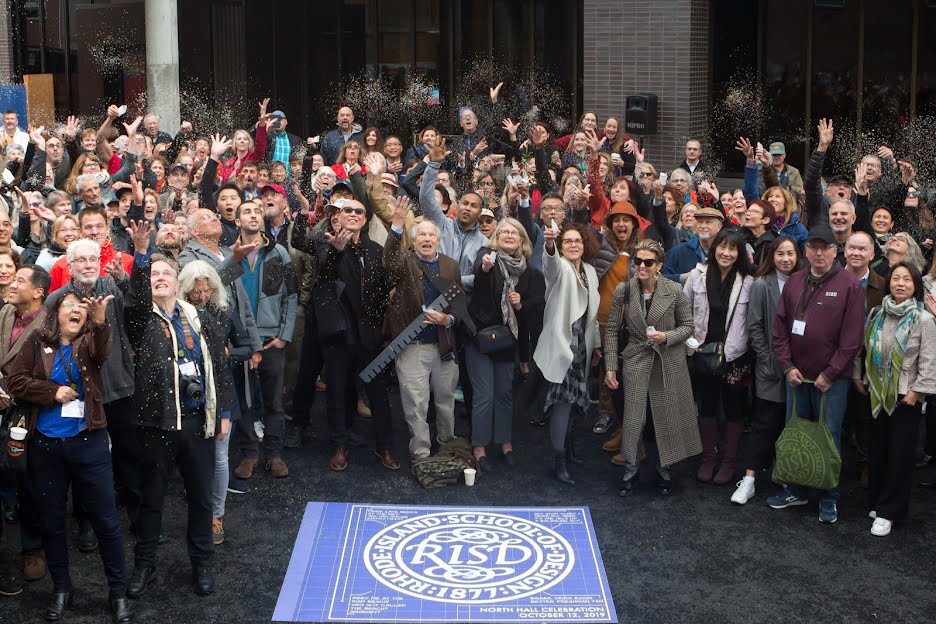 “We have so much good news to share,” President Rosanne Somerson noted in welcoming the crowd on Saturday morning, October 12.

Among the highlights of that good news: a 57% increase in applications in 2019, the highest rate of undergraduate financial aid ever given to incoming students and the newly created Society of Presidential Fellows program, which will offer selected graduate students tuition-free access to RISD as of fall 2020.

Somerson went on to introduce Joe Gebbia 05 ID/GD, a RISD trustee and cofounder of Airbnb, who moderated a panel discussion highlighting the good work fellow alums are undertaking through social entrepreneurial initiatives.

Gebbia recalled how visiting a local landfill as an Industrial Design major “changed the course of [his] life,” heightening his awareness of the amount of “stuff” already in production and encouraging him to think creatively about repurposing objects (and spaces) that already exist.

Panelists Jon Key 13 GD, Lina Sergei Attar MArch 01 and Scott Lapham 90 PH spoke about the incredible work they’re doing to design a brighter future and how their RISD experiences play into their career trajectories. As co-principal of the Brooklyn-based design studio Morcos Key and cofounder of the collective Codify Art, which supports the Q-T-poc artist community, Key is helping to “amplify marginalized voices” and build community.

Originally from Aleppo, Syria, Attar is also building community on the borders of her war-torn homeland, where the nonprofit Karam Foundation she founded in 2007 provides displaced youth with the opportunity to “reimagine home and build a better world for all of us.”

She spoke passionately about the life-changing impact Karam is having on young refugees and also credited RISD with giving her the confidence to make it happen. “I came here as one person and left another,” she said. “After RISD I saw the world differently and truly believed in my own creative potential.”

As an arts educator in Providence, Lapham founded his nonprofit One Gun Gone after losing four of the teenage students he had been working with to gun violence. He explained that for him and the troubled youth he teaches, art provides a much-needed space for deep thinking and meditation.

They also took in family-oriented workshops, reunion luncheons and dinners, special RISD Museum tours, a talk by illustrators SooJin Buzelli 96 IL and Chris Buzelli 95 IL, a screening of the new Netflix documentary featuring Associate Professor of Industrial Design Cas Holman and Providence’s inimitable WaterFire festivities as the weekend heated up and the weather continued to cooperate.

“I’m incredibly jealous of the students who get to live in this building,” said senior Cathy Park 20 ID/GD as she welcomed guests to the ribbon-cutting ceremony. As president of the Student Alliance, she pointed out the importance of first-year housing in helping to build a sense of community and serve as the hub for lasting relationships.

Tehrani described the design-build process as “fast and collaborative” and laughingly thanked RISD Admissions officers for changing his life 40 years ago when they accepted him despite his “terrible grades.”

Standing Up to Gun Violence

A multidisciplinary initiative at RISD draws attention to the thousands of lives lost in mass shootings since the massacre at Columbine High School 20 years ago.