Leading the Experimentation at Pilchuck 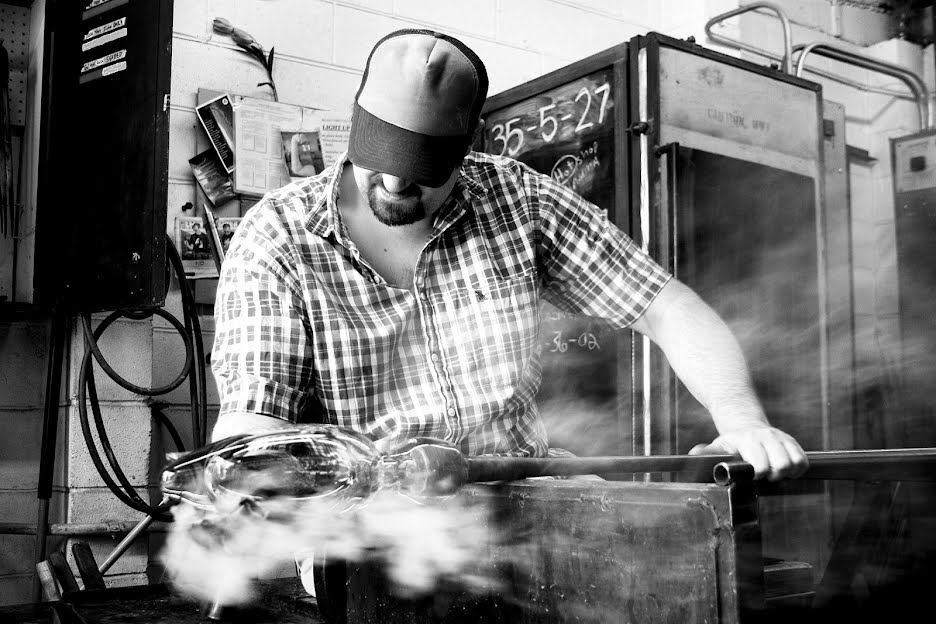 “For me, making art is not optional,” says the Pilchuck Glass School’s newly hired Artistic Director Ben Wright MFA 09 GL. “It leaks out whether I want it to or not.”

Since earning his MFA in Glass at RISD, Wright has let his inspirations leak out primarily in the form of conceptual and often interactive installations incorporating light, sound, glass and natural elements like grass. He started out studying biology at Dartmouth, so much of his work continues to be based in scientific research, examining how humans relate to the natural world.

“My creative process is built on fearless experimentation and embracing failure,” Wright says, “and I encourage that in my teaching. Ideally the research spins off into three or four different investigations, and not everything goes exactly as planned. That provides a tremendous opportunity for learning.”

Wright has been sharing his philosophy with students since 2009, first as a professor at University of the Arts in Philadelphia and later as the educational director at the experimental UrbanGlass space in Brooklyn. But he has also relished the opportunity to shift gears and run a summer workshop and residency program at Pilchuck’s impossibly green campus 50 miles north of Seattle, an experience that has had a profound effect on his practice.

In 1971 Anne Gould Hauberg and John H. Hauberg donated their 50-acre tree farm to the school when glass pioneer Dale Chihuly MFA 68 CR moved to Washington state to found Pilchuck after helping RISD get its own studio glass program off the ground. Although the renowned glass artist is no longer involved with day-to-day operations, Wright describes Chihuly as the school’s “spiritual leader” and says that as Pilchuck’s newest artistic director, he’ll build on that vision.

“Dale’s influence is felt not only here at Pilchuck, but across the Pacific Northwest,” says Wright. “He brought together the best possible teachers from around the world and just allowed the magic to happen—and that’s a philosophy I buy into.”

Like UrbanGlass, Wright adds, Pilchuck is pushing the boundaries of glass, but through a residential model. “Pilchuck offers an immersive environment,” he explains, “and that creates a certain intensity. You can get a lot done when your only job is to participate in the program.”

In addition to directing Pilchuck’s summer studios (which run from May through November), evolving its programming and creating new partnerships, Wright is also programming its exhibition space in Seattle. “I intend to present a mix of voices,” he says, “inviting curators in to identify concepts and curating a number of shows myself.”

In addition, Wright is curating a show at UrbanGlass in September featuring the work of Mexican-American brothers and lifelong collaborators Einar and Jamex de la Torre. Earlier this year, he traveled to Poland, where his solo exhibition The Invasive Species was on view at the BWA Wrocław Gallery. “I’m hoping that show will travel to a couple of other venues in Europe as well,” he adds.

Wright is cautious about predicting where Pilchuck’s educational programs will go under his direction. “Just answering that question limits the possibilities,” he says. But he expects that the program—like RISD’s own Glass department—will continue to balance experimentation with a deep respect for traditional craft.

As a grad student in Glass, Mays Albaik MFA 19 GL is constantly discovering exciting ways to expand and refine her creative practice.

Excited to Explore Gambiarra in Brazil

Thanks to a 2018/19 Fulbright Fellowship, Gayle Forman 14 GL will push materials exploration to new heights in São Paulo, Brazil.