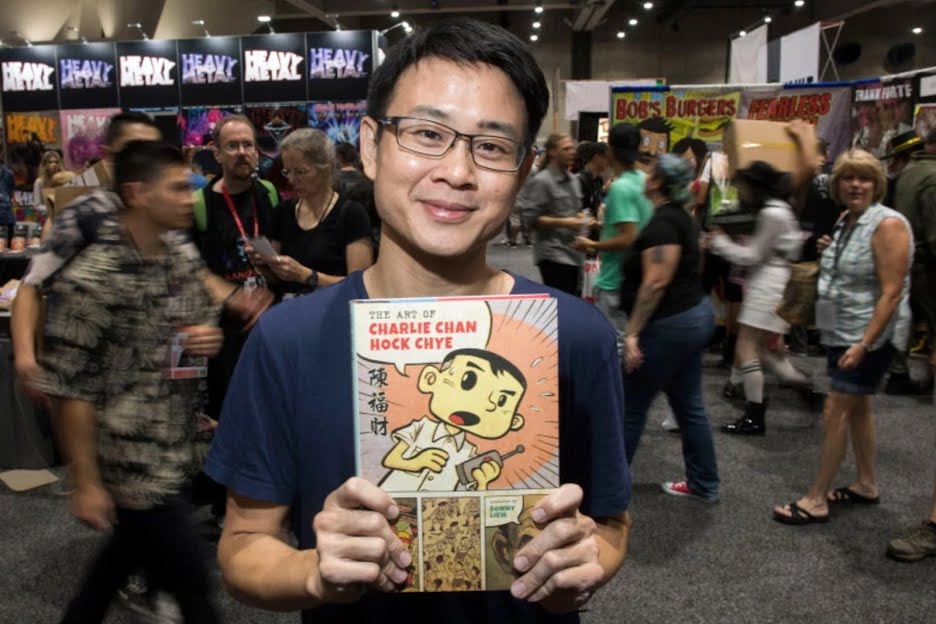 As the 2017 iteration of Comic-Con—the boisterous big bash in San Diego—came to a close on July 24, RISD alumni Sonny Liew 01 IL, Erica Henderson 08 FAV and Anne Szabla 10 IL stood out among the colorful creators and more than 130,000 avid consumers of comic books, characters, films and sci-fi fantasy who flock to the annual celebration. Many who attend the long-weekend conference do so in costume, eager to telegraph their passion for Yoda or Game of Thrones, Star Trek, Star Wars and more trendy fare like The Avengers and The Walking Dead.

After being nominated for a whopping six Eisner Awards—the Oscars of comic books and presented each year at Comic-Con—Liew, a comic book artist based in Singapore, collected three. The wins are for Best Writer/Artist, Best Publication Design and Best US Edition of International Material—Asia for his phenomenal graphic novel The Art of Charlie Chan Hock Chye (Pantheon).

Liew’s autobiography of a fictional Singaporean comic book artist dives into a revisionist history of the city/state and has proven to be something of a sensation since its publication in the US in early 2016. Through limited words and engaging illustrations, the book presents a history of Singapore from the 1950s to today as purportedly told by Charlie Chan, the aging cartoonist Liew created.

“I’m trying to make history more inclusive rather than championing a competing version,” Liew explains. The standard story about the rise of Singapore that kids learn in school “is part of the truth,” he acknowledges, “but if you leave out the alternative histories it’s a less accurate picture.”

When Liew first started thinking about the book, the Malaysian-born artist who has lived in Singapore since he was five imagined it would mostly appeal to fellow Singaporeans interested in reexamining their own past. But once it surfaced overseas and reviews and praise poured in, he realized that he had created something with a more universal appeal.

Still, Liew says he “was very surprised” to earn the most Eisner nominations of anyone in 2017. “I was hoping for one or two, but six was nothing I could imagine,” he told a reporter for The New York Times.

Szabla, who works as a concept artist at Harmonix in Boston and is compelled to make comics late into the night, earned an Eisner for Best Webcomic of 2017, along with the Russ Manning Most Promising Newcomer award. She publishes new episodes of her comic Bird Boy—about an undersized boy desperate to prove his worth to his tribe—every Thursday.

Also a standout at Comic-Con, Henderson—who has been attracting attention for making a mark in the male-dominated industry—earned an Eisner for Best Publication for Teens for her artwork for the Marvel series The Unbeatable Squirrel Girl, featuring an unglamorous superhero known for “eating nuts and kicking butts.” Proving to be something of a phenomenon since it first resurfaced in 2015, Squirrel Girl offers a smart hybrid of edgy indie comics and content aimed at kids. The combination of Ryan Q. North’s writing and Henderson’s artwork offers a fresh take on body image, gender biases, comic book tropes and the meaning of power.

“When I was a kid in the ’90s, I wasn’t really into superheroes,” Henderson has said in recent interviews. “You would pick up an X-Men comic and have no idea what was going on. I hated that. The good thing is, a lot of indie comics were appearing and they didn’t see comics as one (superhero) thing.” So she started paying attention and reading comics that appealed to her.

A couple of years after graduation, Henderson was working as a freelance illustrator and dabbling in the world of comic books when Marvel “emailed about Squirrel Girl out of the blue,” she says. “It was exciting to get anything from a major company,” she admits, and since the reintroduction of a comic book character first created in 1992—conceived of as a girl with the relatively useless power of being able to talk to and command squirrels—was not likely to “get a lot of scrutiny, there was real freedom to just go for it… and try something light, fun.” Just two years into it, the North-Henderson collaboration clearly shows chemistry.

Henderson also accepted recognition at Comic-Con for Archie’s Jughead, a comic she draws with Derek Charm that won for Best Humor Publication. In accepting the accolade, she thanked her late father, an Archie comic book writer whose love of the genre eventually wore off on her, though he died just before she started getting involved in the industry.

Co-author Chip Zdarsky, who couldn’t be there to accept the Eisner, sent a speech acknowledging Henderson’s and Charm’s contributions. “They’re two of the best artists in the business,” he said, “and every company should be showering them in money—ha, ha, just kidding. This is comics!”
—Liisa Silander

Students in a Wintersession Industrial Design studio conceived of by two grad students made future-focused work inspired by science fiction.