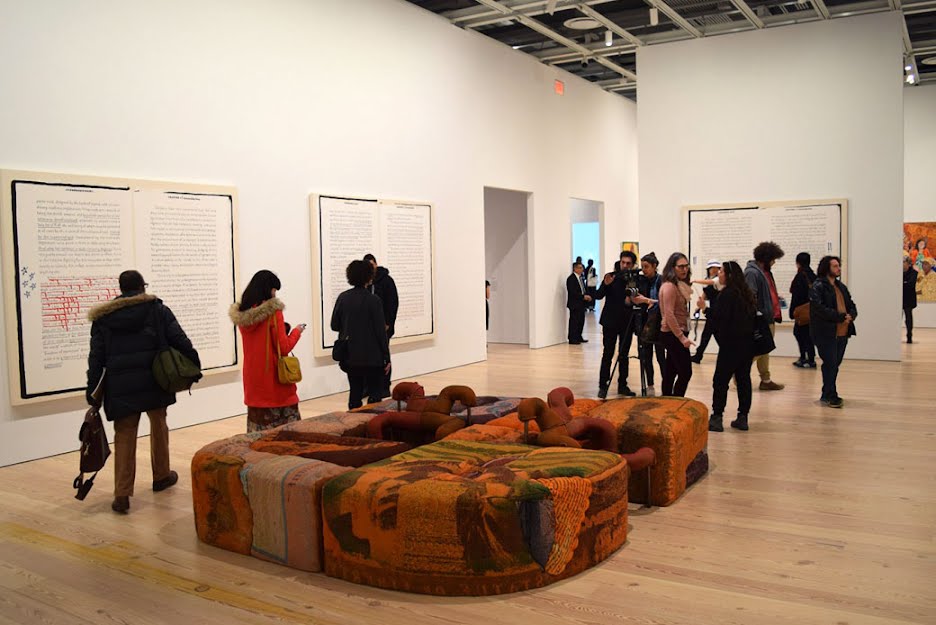 This spring half a dozen alumni are in incredibly good company among the 63 individuals and collectives selected to participate in the 2017 Whitney Biennial. A critical success, the exhibition has been drawing huge crowds since it opened in mid March.

The general enthusiasm is well founded and the presence of so many accomplished RISD artists in this year’s biennial is both moving and meaningful.

On the sixth floor, photographer Deana Lawson MFA 04 PH presents a new series of breathtaking work juxtaposed with paintings by Henry Taylor, with whom she has maintained an ongoing discourse. Seen together the work of both artists is especially powerful.

In an adjacent gallery, people are lined up to put on VR headsets and subject themselves to Real Violence, which is meant to highlight just how effective VR is in its ability to isolate each of us. In it Jordan Wolfson 03 SC uses a baseball bat to pummel what appears to be an actual person who makes eye contact with viewers. Expressions on people’s faces as they return their VR headsets to the stands at the end of the 2:25-minute experience confirm that it’s among the most disturbing and troubling pieces in the biennial.

Leigh Ledare 00 PH, best known for his own disturbing photography, presents a new 16mm film called Vokzal, shot in Moscow outside three adjacent train stations and presented in the galleries as three looped 16mm projections replete with the cranking and buzzing of the anachronistic projectors used to screen the film on the walls.

As part of the collaborative Occupy Museums, Noah Fischer 99 SC is showing an updated version of the group’s piece Debtfair, which embeds selected works from 30 indebted artists into a fifth-floor gallery wall, organized according to the type of debt that they owe. The installation makes a timely point about ways in which museums and dealers benefit at the expense of artists.

Evocative paintings by Shara Hughes 04 PT—whose work also appears on the cover of the new issue of RISD XYZ—create a wonderful bit of escape in an entire fifth-floor gallery.

And throughout the museum, enticing sculpture by Jessi Reaves 10 PT activates various areas, including an inviting upholstered piece meant to be utilized in the gallery. “Rejecting the sleek craftsmanship of iconic midcentury design, Reaves exaggerates markers of construction to an almost aggressive abundance,” note co-curators Christopher Lew and Mia Locks.

While the biennial officially closes this Sunday (June 11), selected installations remain on view longer—including the work by Lawson, Reaves and Wolfson on the sixth floor.