Melissa Armstrong 07 ID is the first to admit that candy isn’t the easiest material in the world for making art – especially when it involves actually growing the crystalline sugar most of us know as rock candy. 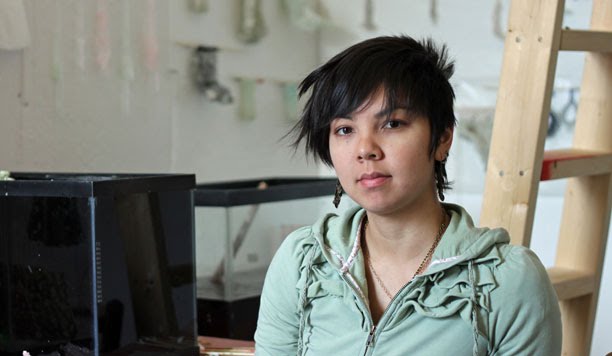 Melissa Armstrong 07 ID is the first to admit that candy isn’t the easiest material in the world for making art – especially when it involves actually growing the crystalline sugar most of us know as rock candy. “Even though I’m working with an edible material, my studio ends up resembling a mad scientist’s lab with pots of boiling sugar and aquariums full of crystal-growing sugar solution,” she says.

Armstrong initially began experimenting with candy during a 2010 residency at the Vermont Studio Center in Johnson, VT. “All of my previous work had dealt with permanence and impermanence, and would degrade or fall apart in various ways,” she says. “So when I went to Vermont and wanted to play with something totally new, I chose candy – initially hard candy – because I knew it would melt, dissolve and be edible, allowing room for all types of degradation and interpretation.”

Beyond its transient qualities, candy appeals to Armstrong because “there is an innate playfulness and innocence in the material” that creates a tension between the sugary substance itself and its application. But as she began making candy art, she quickly realized that the idea of actually growing sugar crystals presented even more intriguing creative potential.

“I got my degree in ID and have always been really interested in the intersection of art and science,” she explains. “I now recognize that they have much more in common than I ever thought.” Through her studio “lab” experiments, she began researching how super-saturated sugar solution can grow on hand-knit lace, transforming it from a soft, malleable material “into literal rocks and crystals through a very simple scientific process.”

Armstrong found the results to be both “beautiful and baffling,” especially as the sexual overtones crystallized in pieces likedura mater, a scanty “suit of armor” made to fit a 5'8" woman, which represents her first large-scale piece of rock candy art. This piece and other results of her residency at Studio Center are on view inScience is Fiction: New Work by Melissa Armstrong, a “mini-retrospective” of her crystalline work that continues through April 8, 2011, at Gallery II in Johnson, VT.

“I love that these feminine knit pieces” become “infused with entirely new associations of the edible, the sweet and seductive, the feminine and the inaccessible,” Armstrong says. Thanks to an NEA grant, she’s continuing her research into rock candy art this spring during a May residency at the Virginia Center for the Creative Arts in the foothills of the Blue Ridge Mountains.