Seeing the Future in Seoul

RISD's semester-long program in Seoul invites students to connect with Korean alumni and explore a country of great geopolitical and cultural significance. 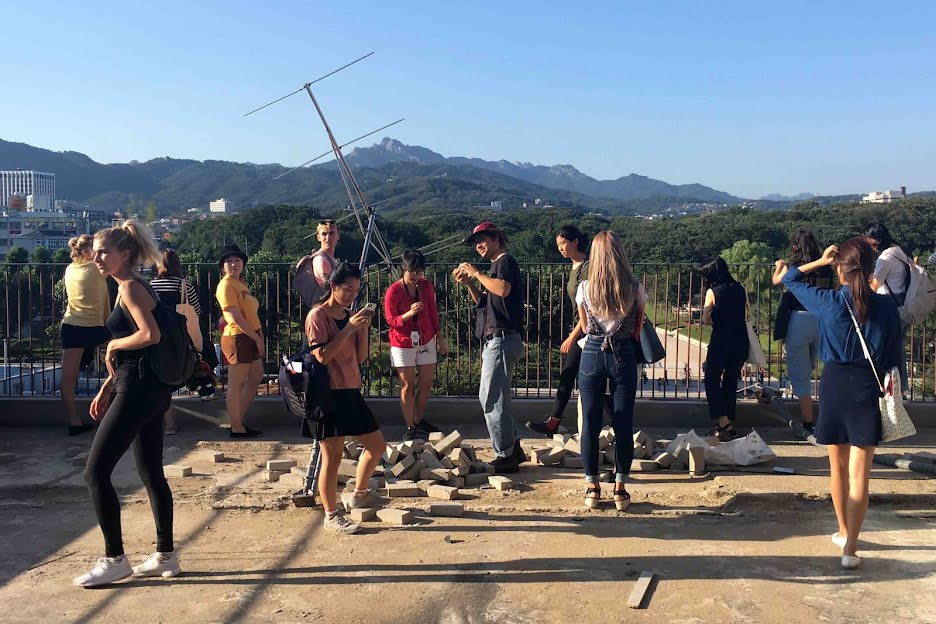 “I’ve realized how valuable it is to take time to explore,” says Zoë Bax 18 IA. Two months into RISD’s semester-long residency program in South Korea, she and her classmates have already explored a great deal. From the island of Jeju (off the Southern coast of the peninsula) to the demilitarized zone that separates North and South Korea to Seoul’s traditional hanok neighborhoods, the results of that exploration are palpable in their work. “I feel more inspired when I take the time to find new places and have new experiences,” the designer adds. “I also work much better and have better ideas.”

Bax and six other RISD undergraduates representing as many disciplines—along with one architecture student from Brown University—are studying with Interior Architecture Professor Peter Yeadon in the 2017 iteration of RISD in Seoul, the first semester-long experience abroad that RISD has launched since founding the European Honors Program in Rome in 1960.

By positioning this new program in South Korea, RISD is introducing current students to interdisciplinary, intercultural learning in a country of great geopolitical and cultural significance, while also encouraging them to connect with a network of more than 2,000 Korean alumni. At the same time, the program nurtures RISD’s longstanding partnership with Ewha Womans University, a highly regarded research university with more than 25,000 students.

A small group of Ewha students and faculty are also participating in the fledgling program. “For this interdisciplinary and collaborative program, it is important for us to work with a school that doesn’t look exactly like our own,” says Gwen Farrelly, director of RISD Global. RISD students live with their Korean peers on the Ewha campus and are integrated into their community. “It’s a true partnership,” Farrelly notes.

Building on the success of a pilot program in spring 2015, the Global team is working with Ewha to develop a recurring, long-term collaboration in Seoul. “The program is unique in that Korean students are in the classroom with our students and they travel with them. They really provide a lens into the culture of the country,” explains Associate Director of Off-Campus Global Learning Valeria Albani.

Yeadon, who has mostly been teaching graduate students in Providence in recent years, is delighted by the energy of the undergraduates he’s working with in Korea. “I’ve been impressed by their curiosity. They’re excited and engaged by the city,” he says. “For me it’s a rare opportunity to work across the disciplines—an opportunity students are thirsty for as well. And it gives us all the chance to learn how to better collaborate with others, specifically those from different cultural backgrounds.”

The sentiment is echoed by Min Jeong Cho, a participating Ewha student majoring in Media Interaction Design. “Working with RISD students from different cultures and majors feels novel,” she says. “I’m learning about the way I work and it’s been interesting to see things I hadn’t before in our discussions about Korean culture and micro-houses. But best of all is teaching everyone about Korean food.”

For Jungju Hwang, an Industrial Design major at Ewha, the benefits of RISD’s studio-focused approach to learning has been valuable. “I don’t know how class typically goes at RISD but in Korea we rarely get a chance to go on a studio tour,” she says. “Through this program we’ve been able to do many studio tours, which makes me really happy.” From visits with the Seoul-based architecture studio MOTOElastico and C-Lab (Samsung’s new creative lab) to tours of POSCO steelworks and TagHive, students receive behind-the-scenes access to South Korea’s rapidly expanding creative economy.

These excursions, along with studio discussions, are proving to be especially successful thanks to the many RISD graduates in the area. “Our alumni work in key positions at significant studios, arts organizations and galleries in Seoul,” says Farrelly. “Their participation in the program helps current students engage in contemporary Korean culture.”

Kate Cho BArch 09, who runs an architecture and design studio, is among the Korean alumni who visited for midterm critiques. “The international nature of the collaboration between students makes the program worthwhile,” she observes. “And for me, it was great to get back in the RISD loop and be a part of that studio culture again.”

Of course, the eye-opening experiences for students are taking place in the broader context of political challenges on the peninsula this fall. Given the current climate, Yeadon remembers the group’s visit to the DMZ as a “significant and momentous opportunity.”

“What surprises me most is the difference between what you think you know about a place versus its reality,” notes Bilan DeDonato 19 TX. “Through my Korean friends in the States, along with books, news, classes and things like that, I had certain assumptions. But to be able to compare those assumptions with real experiences has been interesting. Reality is just much more comprehensive than learning facts and hearing secondhand stories.”

At the inaugural Seoul Biennale of Architecture and Urbanism, recent RISD grads showed work addressing the future of housing in the South Korean megacity.

An exhibition featuring the work of students participating in RISD Global programs frames travel as both a catalyst and a point of connection.