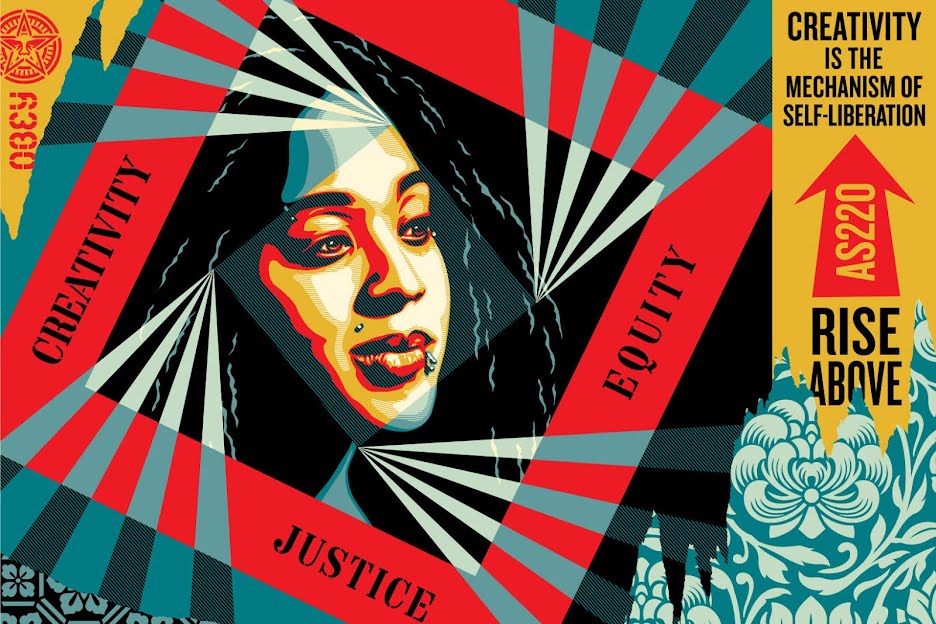 When Shepard Fairey 92 IL first launched his Andre the Giant Has a Posse sticker campaign in 1989, he was a student at RISD and wasn’t really thinking about changing the world. The prank was essentially intended to amuse his skateboarding buddies.

“But it quickly morphed into a broader statement about democratizing art, waking people up to their surroundings and getting them to ask questions,” said the now well-known artist, speaking to a packed house in the RISD Auditorium on Monday, October 21.

The LA-based artist—who joined RISD’s Board of Trustees this year—was back in Providence to complete his 100th mural in support of the local arts nonprofit AS220.

While he’s pleased to see how much downtown Providence has changed, Fairey is also “glad to know that there’s still a little dirt under the fingernails here and that creative people can still find affordable spaces for experimenting.”

At and after RISD, Fairey went on to hone his spare, graffiti-esque style and introduce the OBEY campaign, which went viral decades before memes and social media were a thing. The work, he says, was a direct response to the 1988 film They Live, directed by John Carpenter.

“There’s a sequence when the protagonist puts on these sunglasses that allow him to see what signs and ads really say,” he recalls, “things like watch television, consume and obey. Of all the words that were rendered concrete from the ether, obey hit me like a ton of bricks.”

Facing the Giant: Three Decades of Dissent, a traveling retrospective of Fairey’s work that has already been shown in Paris, Vancouver, NYC and elsewhere, runs from October 25–November 16 at AS220’s satellite gallery on Westminster Street.

The images selected for the show—including his acclaimed 2008 Hope poster in support of Barack Obama’s presidential campaign—highlight what the artist describes as “building blocks for my body of work. Each one was important in my evolution,” he adds, “aesthetically strong and conceptually significant.”

Fairey’s talk at RISD was presented as a dialogue with faculty member Tom Roberts, who met the artist as a “skinny sophomore” in his popular class on social commentary and propaganda. Roberts recognized his promise from the get-go and describes him as “brilliant, original and quirky… a one-man army.”

The conversation was prefaced by a short documentary narrated by Fairey, who attempts to explain how his perspective and relationship with the mainstream art world have evolved over the decades.

Although his work is now included in the permanent collections of such major cultural institutions as MoMA, the Smithsonian and the Los Angeles County Museum of Art, he continues to engage with people who travel in less established circles and to “maintain an outsider spirit.”

Fairey’s messaging has also been consistent over the years. He espouses self-empowerment, rebellion, gender equality and campaign finance reform and stands against xenophobia, the military industrial complex, propaganda and environmental destruction.

He contributes a portion of the profits from commercial ventures like his OBEY Clothing line to help support projects and organizations he believes in (including AS220). “Creating is amazing therapy,” he says, “and organizations like AS220 provide access for everyone.”

Fairey’s decision to serve as a RISD trustee was also largely inspired by the notion of access—one of the pillars of the college’s newly launched strategic plan.

“The strength of the school depends on the quality of the students,” he says, “and if that quality is hindered by affordability, that’s a problem. RISD is building scholarships and other funds to subsidize applicants who have the merit in their work but don’t have the money.”

Another issue RISD is focusing on that caught Fairey’s attention is student wellness. “When I was a student at RISD, I felt a lot of pressure and was really sleep-deprived,” he recalls. “So, I was glad to learn that mental health is being taken seriously.”

In terms of advice for current students, Fairey notes that “it’s important to ask for help sometimes,” calling out classmate (and current RISD faculty member) Ryan Lesser 93 ID and Nice Slice pizza maven Al Read, who were there for him when the road got rough.

If he had to attribute his success to one characteristic, Fairey would probably opt for tenacity. “I planted a lot of seeds that took a while to grow, and people were quick to call my [early] work mediocre,” he says of his career trajectory. “But if you work hard and believe in what you’re doing, the art world will eventually come to you.”