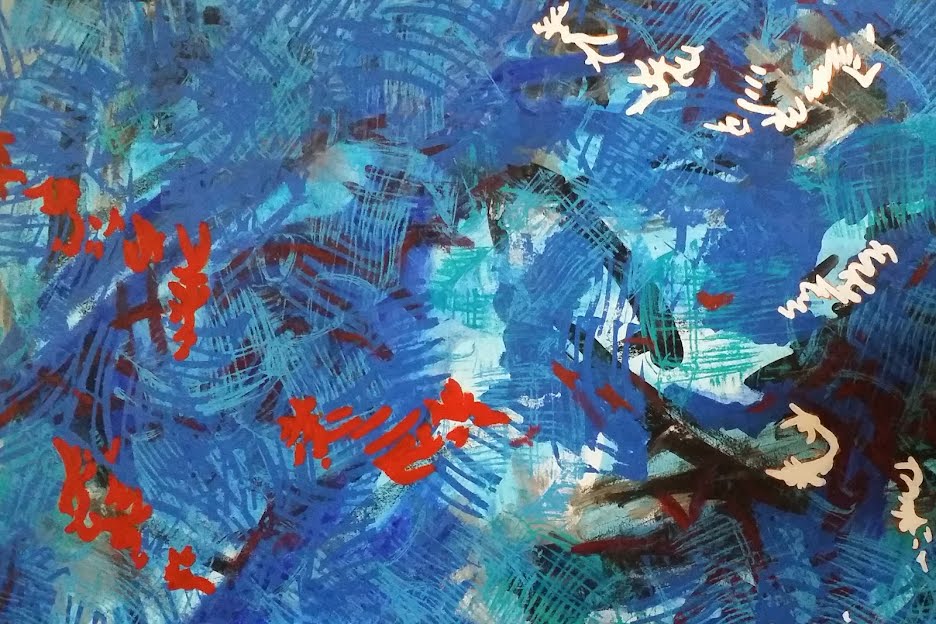 Concrete, Water and Sky, a recent piece by Textiles tech Polly Spenner 10 TX, is inspired by both the natural world and manmade objects.

When artist Polly Spenner 10 TX presented her first-ever solo exhibition in RISD’s Benson Hall in August, it was time. The colorful collection of paintings, digital prints, weavings and fabric collages she showed was 30 years in the making. “But there was no way the show could have happened earlier,” says the ebullient technical assistant in Textiles. “I just wasn’t ready.”

Spenner’s relationship with RISD began in 1990, when she came to Providence after graduating from the noted arts high school at Interlochen Center for the Arts in Michigan. “I always knew I wanted to be an artist,” she says, “so I started researching RISD when I was in the sixth grade.” Once she got accepted, she was on the fence about whether to major in Sculpture or Textiles. “But I opted for Textiles because I love using repeats to get to the heart of an artistic idea,” she says.

After choosing Textiles, Spenner threw herself into learning everything she could about the discipline and honed her creative vision in the studio, drawing energy from faculty and fellow students. “I enjoyed doing things over and over again until I got them just the way I wanted them,” she recalls. “And I loved the camaraderie in the Textiles department.”

Although Spenner got close to completing her degree requirements, she suddenly hit a major bump in the road as a senior. “I think I withdrew because I was scared,” she explains. “I started questioning everything—even my commitment to art.” What started as a compelling need to pause and think things through turned into an 18-year hiatus, during which she ended up exploring everything from phlebotomy to aviation mechanics—before eventually returning to RISD to earn her BFA in 2010.

Spenner’s homecoming proved to be so joyous that after graduation she was thrilled to land a job in the Textiles department. “As a technician, I teach professors and students how to safely use the equipment—everything from hand looms to dying equipment to the jacquard loom—order supplies, make repairs and run the weaving and silkscreen studios as well as the dye lab,” she explains. “I’ve always been interested in how things work, so this job is a perfect fit.”

When working on her own projects, Spenner usually begins by making architectural or abstract drawings that eventually turn into weavings or paintings. “I like the spaces in-between,” she notes—“shadows and reflections that become shapes in my sketchbook, which I carry with me all the time.”

Inspired by both nature and music, Spenner says she couldn’t be more pleased with the turnout for her RISD opening. “Everyone showed up—from facilities and public safety people to professors, students and friends,” she says. “My aunt and uncle were there, and even my father surprised me and came in from Hawaii! It was a magical night.”

“I love Aquanetta’s poems,” says Spenner. “They’re gritty and powerful. She recorded herself reading and playing guitar and bass, and I played a loop at my show next to the pieces her work inspired.”

Spenner says that “everything came back around” at the exhibition and that she’s now sure she has chosen the right path. “Using my expertise and my fix-it attitude to help students is really fulfilling,” she says. “It feels good to make a positive impact.”

A juried exhibition at the RISD Museum pairs pieces from the permanent collection with work created last spring in RISD’s Textiles department.

RISD and the Salama bint Hamdan Al Nahyan Foundation are working together to support the UAE’s emerging art scene.

Textiles for HPV Prevention in Mali