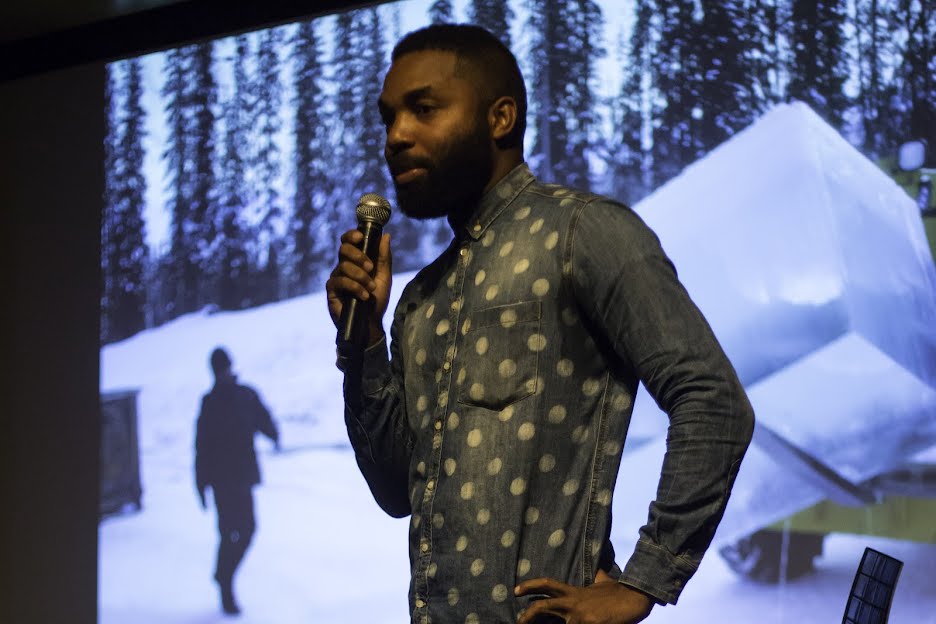 At RISD Weekend, Tavares Strachan 03 GL shared insights into the process behind his ambitious conceptual installations.

Addressing a crowd of RISD parents, fellow alumni and current members of the campus community, Tavares Strachan 03 GL launched into his RISD Weekend keynote remarks at an unexpected place: basketball legend Wilt Chamberlain’s 100-point game. In linking the athlete’s historic achievement—which he owed in part to a (fleeting) willingness to shoot free-throws underhanded—to the advantages of rejecting herd mentality, the Bahamian artist exhibited his own penchant for doing the unexpected and resisting categorization. Throughout his talk, he connected his singular approach to making ambitious installations to the disparate ideas that drive his work, showing the limitless possibilities for art to spur cultural change.

Strachan captivated the audience on Friday, October 7 with insights into his conceptual approach and commitment to disrupting conventional wisdom. His talk also marked the official beginning of 50 Years of Glass at RISD, a year-long anniversary celebration that continued throughout the weekend with other key glass artists such as James Carpenter 72 IL, Toots Zynsky 73 GL and Helen Lee MFA 06 GL, among others.

In introducing Strachan (one of her former students), Glass Department Head Rachel Berwick 84 GL noted his “perpetual desire to question what is as a means to discovering the possibilities of what can be” and applauded his commitment to “build[ing] and connect[ing] communities with and within his work.” With projects like The Distance Between What We Have and What We Want, an installation made from a 4.5-ton of arctic ice and displayed outside his childhood elementary school in Nassau, and We Belong Here, a neon sculpture that floated along the Mississippi River in New Orleans, he has consistently challenged through art the idea that an individual’s identity can be understood simply in terms of one’s national origin or physical place in the world.

The medium of glass, said Strachan, is perfect for changing cultural perceptions—or what he calls “shifting the center,” as he did with seen/unseen, a 2011 exhibition that ran at an undisclosed location closed to the public. People could only view the show at a mediated distance—a limitation that was familiar to him as a child. “I grew up on an island. All we had was distance,” he noted.

Like distance and belonging, invisibility and its opposite are also central themes in Strachan’s work, as evidenced by Polar Eclipse, the multisensory installation he created in 2013 for The Bahamas’ first-ever pavilion at the Venice Biennale. For the multifaceted installation, he used the visible invisibility of glass to explore the life of Matthew Henson, an African-American explorer who participated in the first successful North Pole expedition but was rarely mentioned in official accounts. Through glass, Strachan sought to render Henson’s historical invisibility visible, while also “taking people’s expectations of who an islander might be and really disrupting them” by creating an arctic-themed exhibition for the Bahamian pavilion.

During a lively Q+A session following the keynote, Strachan shared with the audience the importance and depth of research behind his many projects, including his ongoing work as founder of the Bahamian Air and Space Exploration Center (BASEC), along with a list of things that currently concern him, such as climate change, pollution and ongoing tension centering around issues of race and identity.

“I’m worried about a lot of things,” he admitted, “but I’m also very optimistic about the people in this room. The responsibility of being an artist is immense. I approach it whimsically but take it extremely seriously.” Turning his focus back to the multigenerational community of RISD makers in the audience, Strachan affirmed his belief that “with the right set of minds and ideas together, there are no limits to what art really can do.”

Glass artist Toots Zynsky 73 GL collects the 2015 Smithsonian Visionary Award and is as busy as every preparing for three new shows.

Using the Landscape of Glass

Multidisciplinary artist Kim Harty 06 GL is excited to step up and lead the glass program at the College for Creative Studies in Detroit.