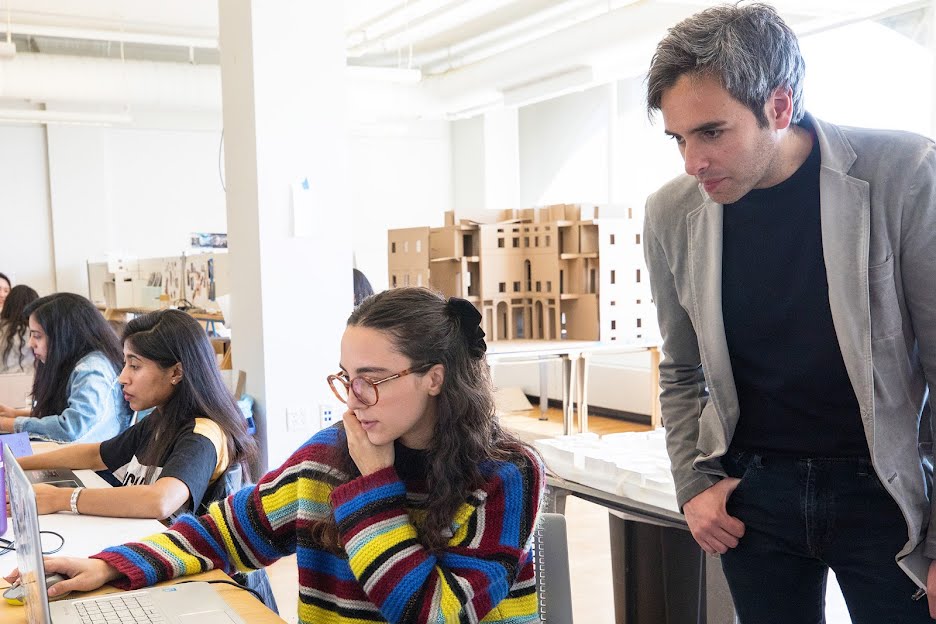 Assistant Professor Stefano Corbo looks at work in progress in an Interior Architecture studio focused on adaptive reuse of a 16th-century palace that houses RISD’s European Honors Program in Rome.

Graduate students in an Interior Architecture studio taught by Assistant Professor Stefano Corbo are reconsidering the 16th-century Palazzo Cenci in Rome where RISD’s European Honors Program (EHP) has been housed since 1960. Using a combination of analogue and digital approaches and taking advantage of the principles of adaptive reuse they’ve been studying since September, the group is integrating valuable input from Providence- and Rome-based members of the RISD Global and EHP team and learning to navigate the constraints that are typical of projects involving historic sites.

“Palazzo Cenci is an important example of late-Renaissance architecture,” says Corbo. Designed between 1579 and 1585 by architect Martino Longhi il Vecchio, the Cenci was originally connected via internal passageways to older, medieval buildings also owned by the Cenci family. RISD students—who live and work in the space for a semester—are inspired by views of the Tiber River and surviving frescos painted by Giovanni Guerra da Modena.

Students began by working together to build cardboard models of the Cenci itself as well as the entire neighborhood. From there they divided the interior of the palace into sections for deeper study—some focusing on the entrance, others on the public first-floor spaces and still others on second-story studios.

“Most of the students are considering the public spaces located on the first level—the lecture hall, library, etc.—where a portrait of Beatrice still hangs,” says Corbo. He explains that Beatrice Cenci, a member of the family, was beheaded at the age of 27 for murdering her abusive father.

Catalina Granados MA 19 is building on Beatrice’s dramatic narrative using “acupunctural micro-interventions” that play up the Cenci’s history and enviable location while providing contemporary comforts like built-in seating and storage. “I’m proposing a pedestal seat under the window that looks onto the Tiber and also lighting and mirrors to make the space seem larger,” she says.

Dingwen Sun MA 19 envisions more radical interventions incorporating an adaptable modular system that makes use of the Cenci’s high ceilings to provide shelving, lighting and studio tables. He’s also attuned to green design, focusing on recyclable and compostable materials made from such substances as corn starch and algae.

But since the status of the structure is akin to a national monument here in the US, “we have to be careful about building codes and other regulations,” Corbo points out.

Another radical angle comes from Di Han MA 19, who approached the project “not room by room but in terms of each functional area.” Her design proposes an indoor green space where herbs and vegetables could be grown year-round.

Contemporary lighting and removable dividers would also create micro-spaces within each existing room. And because the existing floors aren’t original—Corbo describes them as 1960s-era “cotto”—she also proposes breathing life into the space by replacing them with a lighter-colored ceramic tile.

Now that students have put the finishing touches on their proposals, their models and architectural renderings are on view as part of the Graduate Thesis Exhibition, which continues through June 1 at the RI Convention Center.

“All of the students have experience in architecture, but this is the first time that they are working on a historic building,” says Corbo. “It’s good to see them making multifaceted design proposals that create a dialogue between the past and the future.”

Interior Architecture students are working with the Episcopal Diocese of Rhode Island to reimagine and reconfigure Providence’s Cathedral of St. John.

Designing a Refuge for Contemplation

As part of the department’s annual charette, students in Interior Architecture work together to propose quiet campus refuges.