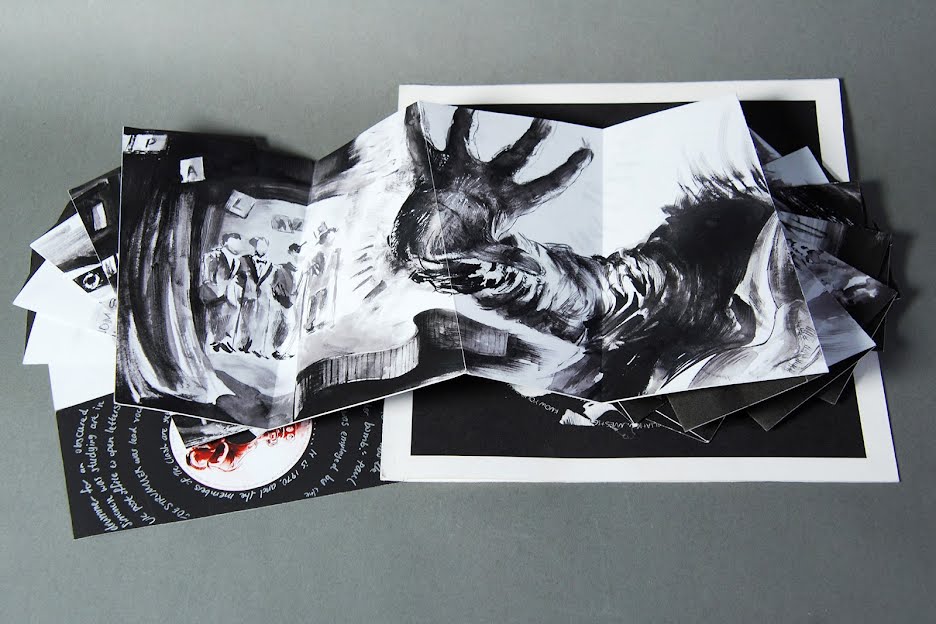 When winners of the 2018 Student Artist’s Book Competition were announced at the Fleet Library at RISD on February 22, it was instantly clear why “books made by artists, or works of art in book form” is such a popular medium through which to express subtle and complex ideas.

“Interest in this form is flourishing here at RISD,” says contest co-organizer and Special Collections Librarian Sarah Dylla. “This year we received 35 contest entries from both graduate and undergraduate students representing almost every department.” And about a third of those entries, she adds, came from first-year students.

In fact, one of the six prizes awarded went to first-year student Cecilia Cao 21 EFS for The Clash (top image), which earned the Award for Innovative Structure. Juror Amy Borezo MFA 00 PR/PT—founder of the high-end bookbindery Shelter Bookworks in western Massachusetts—noted in presenting Cao her award that the structure spins almost like a record and thanked her for “putting the punk back in book arts.”

The jury also included RISD faculty members Emma Hogarth (Experimental and Foundation Studies) and Suzi Cozzens 99 GD (Graphic Design), a noted artist’s book maker herself. Among those presenting awards was Providence College Professor Emerita Alice Beckwith, president of the New England chapter of the American Printing History Association (APHA). She awarded the APHA prize to sophomore Travis Morehead 20 PH for his Sometimes the Thing You Want Bleeds in the Light, which she describes as “a book for the ages.” Featuring walnut boards and cyanotypes bound with hemp twine, the stripped-down piece caught Beckwith’s eye. “Its simplicity,” she notes, “demands our attention.”

Two books earned honorable mentions in this year’s competition: Book of Avatars by junior Kay Liang 19 PR and For You by grad student Anna McNeary MFA 18 PR. The former was praised for its innovative use of material and structure, and the latter—an expertly hand-dyed accordion-style piece bound on both sides by cotton gloves—for being an “effective experiential work.”

Sophomore Runqi Zhu 20 ID took home this year’s Laurie Whitehill Award for The Secret Doors, a beautifully crafted book featuring black-on-gray laser engraving. “She uses every bit of the structure to communicate something,” notes Dylla, “and her emotional and sociopolitical commentary about the prohibition era is powerful.”

Finally, graduate student Kelly Taylor Mitchell MFA 18 PR earned the Grand Prize for Hole in My Pocket (letterpress, beeswax, Crisco, tar, earth, rope). “I kept thinking about this book long after I experienced it,” said Cozzens in presenting the award. “The materials were so thoughtfully selected, and the content is powerful and spiritual.”

Mitchell’s practice focuses on installations and books, though, as she puts it, “I use the word ‘book’ very loosely.” She works with fragrant materials like beeswax and vanilla to create a multisensory experience for the reader in which the scents become apparent as the pages are turned. “Making books is a good way for me to parse things out,” she adds, “to focus on one story—one idea—rather than trying to throw everything into one piece.”

All of this year’s entries can be viewed in the library through May 20. In addition, each winning piece has now been added to Special Collections’ permanent treasure trove of artists’ books.