Interior Architecture students are working with the Episcopal Diocese of Rhode Island to reimagine and reconfigure Providence’s Cathedral of St. John. 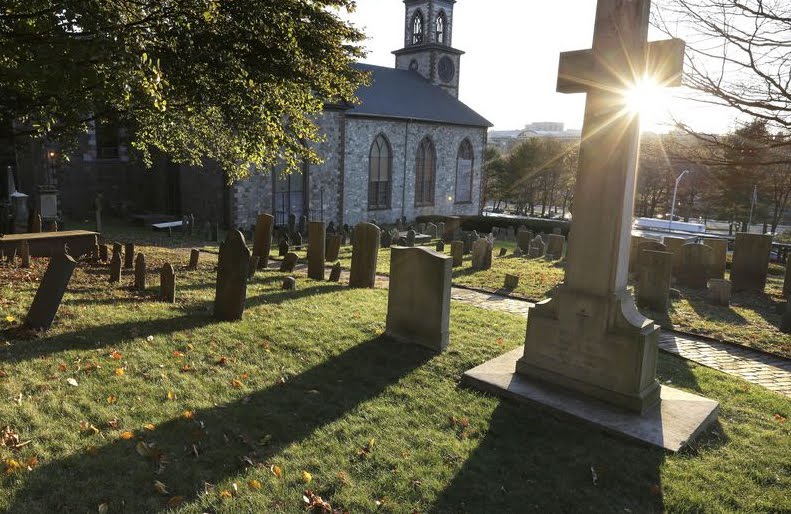 Students in Interior Architecture envision interventions focused on post-slavery healing and reconciliation for the Cathedral of St. John in Providence. photo by Steven Senne

Interior Architecture students in the advanced studio Repair and Reparation are working with the Episcopal Diocese of Rhode Island to reimagine Providence’s Cathedral of St. John as a space to promote racial justice, healing and reconciliation—a home for both the sacred and the secular. Since the church has publicly acknowledged its role in perpetuating and profiting from the institution of slavery in the 18th century, it established the progressive, nonprofit Center for Reconciliation (CFR) in 2015.

Despite Rhode Island’s small size, 58% of the slave ships that left US ports between 1725 and 1807 set out from Providence, Newport and Bristol, and by the middle of the 18th century, 10% of residents in the state were enslaved. One of the goals of the studio is to honor long-deceased enslaved Rhode Islanders by designing a permanent exhibition space focused on the state’s involvement in the slave trade and its long-term repercussions.

“The biggest challenge is teaching students how to ask the right questions as designers,” says Associate Professor Markus Berger, who is leading the studio. “We’re using this project as a kind of laboratory with the expectation that our work will generate more questions than answers and point out the potential for change.”

Church leaders and community members gathered at RISD’s Center for Integrative Technologies on November 8 to discuss the interventions students are conceiving. Among them is Dialogue in Dance by senior Kelly He 19 IA, who is inspired by African dance and envisions the cathedral as a much-needed community performance space that includes workshops and exhibitions focused on “the living heritage of the African diaspora.” Her “soft intervention” idea of using a series of curtains to divide the space in different ways really appeals to the Reverend Canon Linda Grenz, who appreciates her “beautiful, minimalistic approach.”

Graduate student Joyce Kutty MDes 19 is honing in on slavery’s modern-day legacy in the form of the prison industrial complex. Like He’s, her intervention hinges on flexible exhibition spaces with movable panels that would allow multiple configurations. She envisions a series of frames through which visitors would glimpse various views of each exhibition depending on their position in the room.

Ewa Podgorska MDes 19 is taking a more permanent approach, proposing a design that connects the first-floor cathedral to the undercroft below, where she imagines a large play space for local youth. “I like how you’re using wood to carve up the space,” notes CFR Program Director Elon Lee Cook, “but I’m concerned that the intervention is too playful given the violent history we’re talking about.”

Podogorska responds that she “felt bombarded by the site’s history and wanted to focus on building community in the modern day. I'm designating a separate space in the church transept for solemn contemplation,” she adds, “but life is life—bad and good—and I want to celebrate the joy of children.”

Another intervention presented by Colombian grad student Catalina Granados MA 19 uses diagonal lines to “break up the space and make it less hierarchical.” She proposes wall sculptures like those created by NYC artist Leonardo Drew to divide and add a textural element to the space. Granados recommends honoring today’s African-American Rhode Islanders with a salon inside the cathedral celebrating the evolution of hairstyles from the 15th century to the present. Lee Cook is particularly tickled by the idea and notes that she’s already considering developing an exhibition focused on hairstyles of the African diaspora.

Other students see food as the perfect vehicle for building community, proposing communal kitchens, community gardens and cafés. “Food brings everyone together,” notes grad student Sfoorti Sachdev MDes 19. “We could also think about food-related exhibition themes such as sugar—one of the components of the slave trade.”

Students in the studio are now considering the feedback they received and revising their proposals before the end of the semester with the hope that elements of their designs will be implemented when the church is renovated. And while reconciliation is not a new idea, the Episcopal Diocese and the CFR welcome their creative ideas and help in developing spaces, programming and collaborations that will, in Lee Cook’s words, “bring new meaning to an old building and new beginnings for our shared community.”

Discussing the Art of Race

Artwork from the RISD Museum’s collection inspires frank conversations about race in America.