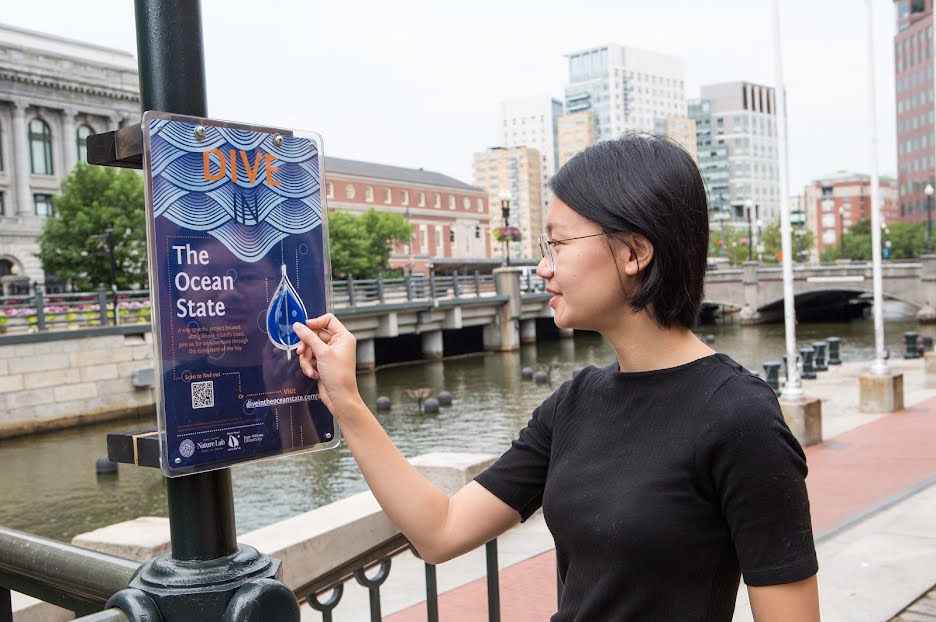 At the start of their summer internships at RISD’s Nature Lab, Xuefei Yang 19 ID and Brooks Barrett learned to care for many of the aquatic animals in residence there—all reflecting the biodiversity of nearby Narragansett Bay. But for Yang, a rising junior in Industrial Design, and Barrett, who studies marine biology at Roger Williams University in Bristol, RI, this seemingly routine task actually played a role in helping them bridge their respective expertise in art and science throughout a 10-week collaborative project.

Barrett and Yang are among 24 students statewide to participate in the Summer Undergraduate Research Fellowship (SURF) program, which is part of a large grant from the National Science Foundation’s Established Program to Stimulate Competitive Research (EPSCor) to a consortium of nine colleges and universities throughout Rhode Island. SURF fellowships support advanced undergraduate study in the biomedical and life sciences and culminate with students sharing the outcomes of their summer projects at an annual conference, which took place this year on July 28 at the University of Rhode Island.

Aiming to inspire empathy for local marine life, Yang and Barrett presented Dive In: the Ocean State, an educational website designed to help eight- to 12-years-olds connect with the local ecosystem through interactive learning. Dive In invites young people to follow a cartoon water droplet named “Surf” as it traces the path of a research journal found on the beach.

Through virtual stops at nine actual research sites on Narragansett Bay, the site highlights a different aspect of marine biology at each one—from the movements of microorganisms to the impact of shipping on local biodiversity. It then offers tools for kids to create comics, music videos and other works that convey scientific information through artistic expression. Yang and Barrett also created and installed site-specific signs at each location to encourage visitors to access the website via QR codes.

In creating educational platforms like this one, the fellows hope to instill a new generation of children with knowledge and empathy for the environment while also sparking dialogue between them and their parents—a way of “teaching upward.” While working on Dive In, Yang and Barrett also shared their work-in-progress with participants in RISD’s Young Artist camps at Tillinghast Farm, another research site along Narragansett Bay. “The kids were so excited to play with the website,” notes internship advisor Stephanie Muscat MFA 17 DM.

Although Yang has long drawn inspiration from Renaissance-era artist-scientists, she says that a recent Wintersession travel-study course to Guyana in which students explored the rich biodiversity of the region reignited her interest in the connections between art and science and helped motivate her to pursue the SURF opportunity this summer. For Barrett, the partnership has helped “loosen up the restrictions” of her discipline and introduce her to scientific tools at the Nature Lab that she had never previously discovered. “Science,” she notes, “is a creative process even if it doesn’t always seem that way.”

This summer, despite their disparate academic backgrounds, cross-disciplinary collaboration came naturally to both the designer and the marine biologist. “Neither saw themselves as ‘the artist’ or ‘the scientist,’” Muscat notes with admiration. “And there’s a lot of power in identifying as both a scientist and an artist.”

Summer interns at the Nature Lab are making an animated educational program about the importance of marine plankton.

Life in a Drop of Water