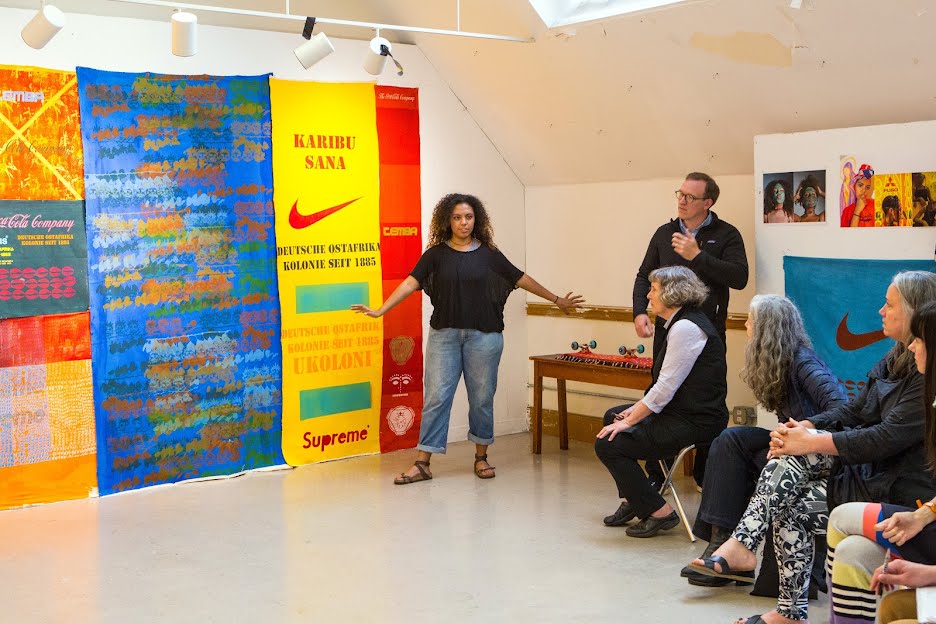 Tanzanian-American student Malaika Temba 18 TX visits her family in Africa every couple of years, but last Wintersession she had the opportunity to see her father’s hometown of Kishimundu in a new light when she was there conducting research for an independent study project (ISP). With the guidance of Photography department faculty member Jo Sittenfeld MFA 08 PH, her ISP instructor, the Textiles major focused on photographing Tanzania’s rapidly changing urban landscape.

“There was so much change—so much modernization and commercialization—since my last visit,” Temba recalls. “And no one wants to talk about history or local culture. The people of Kilimanjaro were quick to leave their traditions behind” in their desire for western comforts.

Among the changes that really grabbed Temba’s attention is the way local shop owners are using commercial iconography ­to decorate their storefronts. “The neighborhood is packed with bright colors and vibrant, hand-painted logos,” she says. “Now I’m trying to recreate that effect in my work.”

When she returned to Providence in February Temba began translating the thousands of photographs she made in Tanzania into a textiles-based installation. She started by creating a mood board using selected photos and then employed a photo emulsion technique to transfer certain images onto fabric.

“I started out using heavy, raw canvas,” she explained at her end-of-semester critique in May, “and applied pigments, which are usually used on paper rather than fabric.” She also worked with Assistant Professor of Textiles Mary Anne Friel to further explore silk-screening processes and fine-tune her techniques, which led to striking results this spring.

Temba showed Textiles faculty members process sketches, photos and woven samples, covering an entire classroom wall with her handpainted silkscreens. Some of the tribal Chagga patterns that inspired them, she explains, seem to jump off the walls in Kishimundu and nearby Moshi and envelop passersby.

Also inspired by contemporary painter Kehinde Wiley, who earned an honorary degree at RISD’s Commencement ceremony in June and is known for his compelling portraits of people of color, Temba says, “I love the way he portrays strong people in powerful poses but allows surrounding patterns to consume their bodies—their identities. I think it speaks to the way African-American culture is consumed around the world”—something she’s interested in extending to Tanzania, she adds.

“The work is extremely ambitious,” noted faculty member Susan Sklarek MFA 77 SC at the crit. “I enjoy the scale of it, but I do think you could better recreate the chaos of the Tanzanian streets by varying the textures and allowing the elements to overlap.”

This is the kind of feedback Temba craves. “I strive to make work that’s ambitious,” she notes, adding that her view of criticism has changed dramatically in the past couple of years. “I used to have strong opinions about ‘good art’ and ‘bad art,’ but I’ve become a lot more open-minded at RISD,” she explains.

This summer Temba is living in Harlem and working for African-American interdisciplinary artist Kenya (Robinson). “She is so badass!” the young artist exclaims. “Her alter-ego—named Cheeky Leche—does performance pieces wearing incredible costumes, so I’ll be working on those.”

When she returns to RISD in the fall, Temba plans to push her Tanzania-focused work forward as part of her senior degree project, figuring out how to insert her own point of view as a Tanzanian-American and where her African and American identities intersect. At the May crit, she shared selfies in which patterns from her silkscreens are projected onto her face and body, an idea she’s considering pursuing further.

“I’m into narrative and not that concerned about which medium I use,” Temba says. “One of the reasons I chose to major in Textiles is because there’s lots of flexibility in terms of exploring different mediums and taking classes in different departments. After graduating, I’d love to do print design for a really cool, politically oriented brand—one that’s trying to say something.”

Behind the Scenes at the RISD Museum

Textiles major Anna Pederson 18 TX builds on her studio education through an apprenticeship in the RISD Museum’s contemporary art collection.

Wintersession – RISD's six-week mini-semester between fall and spring terms – is often a wonderful time for students to go abroad.