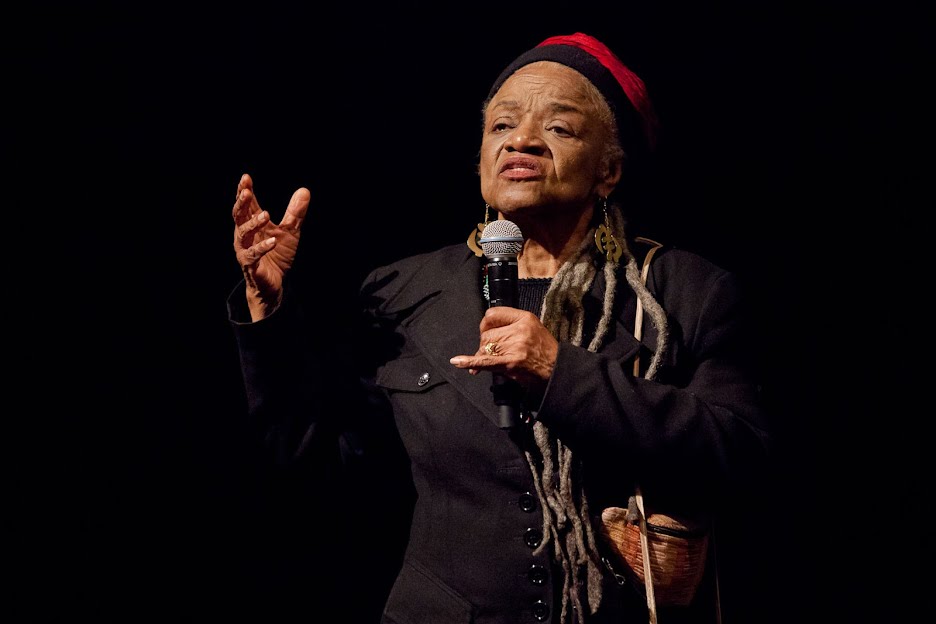 “Some of it you have to teach yourself,” Faith Ringgold told students when she visited RISD on April 13. They had turned out in droves – along with faculty, staff and Providence’s larger arts community – to hear the iconic 86-year-old artist speak about her own path in life and how she broke through so many barriers as a black woman in the arts.

As the third and final speaker in RISD’s expanded 2015/16 Martin Luther King, Jr. Series, Ringgold offered a wonderful complement to talks by author and anti-racism activist Tim Wise, who visited in October, and civil rights leader Andrew Young, Jr., who spoke in January. Showing slides of her work dating back to her very first oil painting as a student at the Community College of New York, she shared personal stories and the abundance of wisdom she has picked up over the years.

Ringgold first blossomed as an artist in the 1960s, an era she describes as “fabulous and fascinating.” Her paintings from the ’60s comment on the violence of street riots in Harlem, where she grew up. Other work the artist shared during her talk included Black Power, a painting that became a US postage stamp, and Flag for the Moon: Die Nigger.She gleefully pointed out the hidden texts in these works, telling an amusing story about prim institutional art collectors who would visit her studio and cringe when they discovered the words in her paintings, wanting work that was “less controversial.”

A 1976 trip to Nigeria and Ghana inspired Ringgold to begin telling her own stories through her art more directly. “Everywhere I looked were images of black people that made me so proud,” she recalled. “In the end, you are the center of everything that happens in your work.”

Encouraged by her fashion designer mother, who taught her that she could do whatever she wanted if she “stayed in the game,” Ringgold went on to make collages, glass tile mosaics, dolls and masks. When she initially couldn’t find a publisher interested in her autobiography, she began telling her story through painted quilts.

In 1995 Little, Brown and Company published We Flew Over the Bridge: The Memoirs of Faith Ringgold, which has since been rereleased by Duke University Press. As an author and illustrator, she has become well known for the 20 children’s books she has created celebrating childhood and African American history. Ringgold taught at the University of California in San Diego for 25 years and has earned 23 honorary doctorates. In addition to speaking and exhibiting around the world, she also has paintings in the permanent collections at such major institutions as the Museum of Modern Art, the Guggenheim, the Met and the Smithsonian American Art Museum, among many others.

But none of this came easily, and breaking into the art world as a woman was even harder than making it as a black painter, Ringgold has said. “None of us will ever be free until women become leaders in religion and politics,” she noted in response to a student question about equality for women in the arts. “And no one is going to give us that freedom. We’ve got to take it.”

RISD’s 2015 MLK Series, an annual tribute to the legacy of Dr.