The Art of Deep Ecology

A Maharam STEAM Fellowship enabled Lee Pivnik 18 SC to pursue his ongoing commitment to conservation during a summer residency in Arizona. 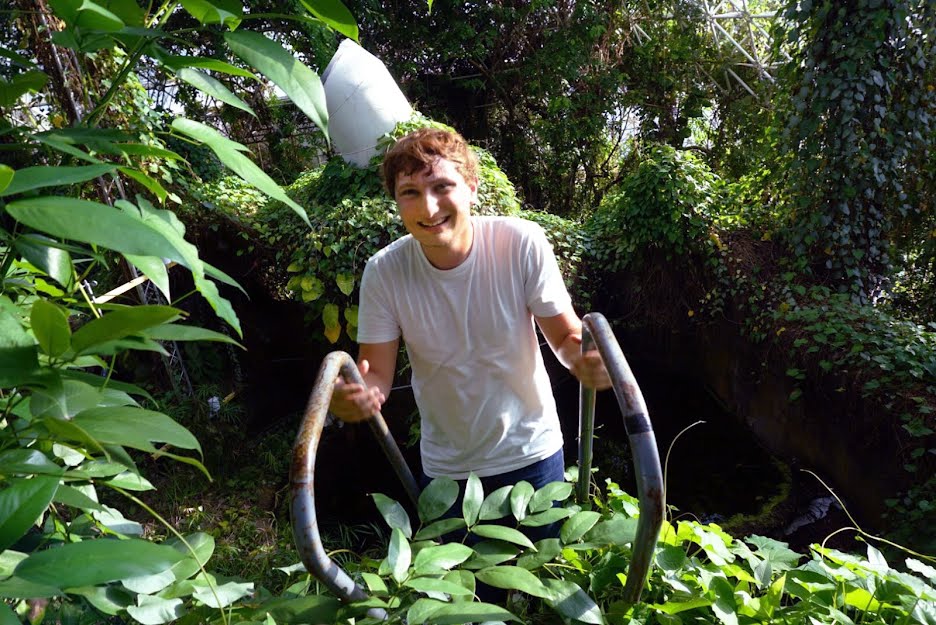 Like others of his generation, Lee Pivnik 18 SC spent countless hours as a kid playing Pokémon, the multi-platform game centered around collecting and training fictional “pocket monsters.” Co-created by avid bug collector Satoshi Tajiri, the game was meant to inspire an interest in biodiversity—which resonated with Pivnik (even if, as he now notes, it’s much more complicated than that from an animal rights perspective). “I began dragging my parents to the Everglades to take photos of native birds,” says the Miami native, whose digital photography skills grew in parallel with his pastime. Those weekend trips, he recalls, “are how I started as an environmental artist.”

Today the senior in Sculpture continues to advance and evolve a creative practice firmly rooted in environmental advocacy. As a solo artist and as founder of the interdisciplinary Institute of Queer Ecology [IQECO], he considers environmental issues abstractly and with an open embrace of ambiguity. But inspiring a new generation of eco-conscious citizens is also central to his creative mission.

Thanks to a 2017 Maharam STEAM Fellowship in Applied Art and Design, Pivnik recently completed a two-month artist residency at Biosphere 2, the scientific research enclosure in Arizona’s Santa Catalina Mountains. Maharam Fellows apply through RISD Careers to earn a $5,000 stipend to work over the summer with government organizations or nonprofits and demonstrate how art and design practices can positively impact their work.

For Pivnik the fellowship enabled him to develop educational programs for young people to learn more about the facility’s current work on food, water and energy systems. Drawing from the work of 19th-century botanist and photographer Anna Atkins, the artist led visiting K–12 groups in collecting and identifying plant samples native to the surrounding Arizona desert. He then worked with them to make cyanotype prints that will be included in an online field guide. In teaching students an early photographic process, he hoped to illustrate the expressive power of art and design “as a means of understanding the world.”

Pivnik’s desire to communicate science through art is significantly informed by his experience as a Nature–Culture–Sustainability Studies [NCSS] concentrator at RISD. He says the interdisciplinary curriculum in the environmental humanities helps him engage in scientific conversation with organizations like Biosphere 2 (which is now overseen by the University of Arizona). His studio practice is also influenced by the courses he takes as part of his NCSS concentration. “The most incredible thing I’ve done at RISD,” the senior says, “is an independent study with [RISD faculty member] Lucy Spelman,” a renowned zoological specialist and advocate for the importance of art and design to scientific research and education.

While at Biosphere 2, Pivnik mounted an ambitious solo show titled A Love that Bears No Fruit, which was meant to highlight a cross-disciplinary mastery of craft and test the long-term viability of closed, human-centered ecosystems (part of the organization’s mission). “Is ‘human achievement’ worth celebrating,” he asks in an artist statement, “if it is built on the backs of dwindling species populations?” Many of the pieces in the exhibition incorporate beeswax, reflecting his research on pollinators and their connection to both the research facility’s history and present-day global health concerns.

For Pivnik the summer experience at Biosphere 2 has inspired him to balance the scientific community’s demand for clear communication with the open-ended poetics encouraged in the Sculpture department. This year he’s also continuing to grow IQECO as a research and exhibition platform (which includes RISD Co-Works Technologist David Kim MFA 14 DM and fellow senior Greta Skagerlind 18 GD), which—to Pivnik’s surprise—was recently featured in Artspace. Also affiliated with Common Field, a national network of alternative art spaces, he and his friend Jake Sillen 18 IA recently opened Fri-ends, a “migratory platform” for showcasing emerging artists.

“I don’t just sit and enjoy things,” Pivnik admits. “I perpetually think about what I’m doing, where I will work next.” In the near future he wants to pursue exhibition and publishing projects on art and environmentalism, and perhaps found a “green museum.” At the heart of all his work is an enduring belief in the power of art to change the world. “Through art,” he says, “I can be a vital voice for conservation.”

As a biodesigner and studio manager of RISD Co-Works, David Kim MFA 14 DM is deeply committed to principles of inclusion and interdisciplinarity.