Ceramics students in their last year of study develop strategies for cultivating their artistic practices and presenting their work to the wider world. 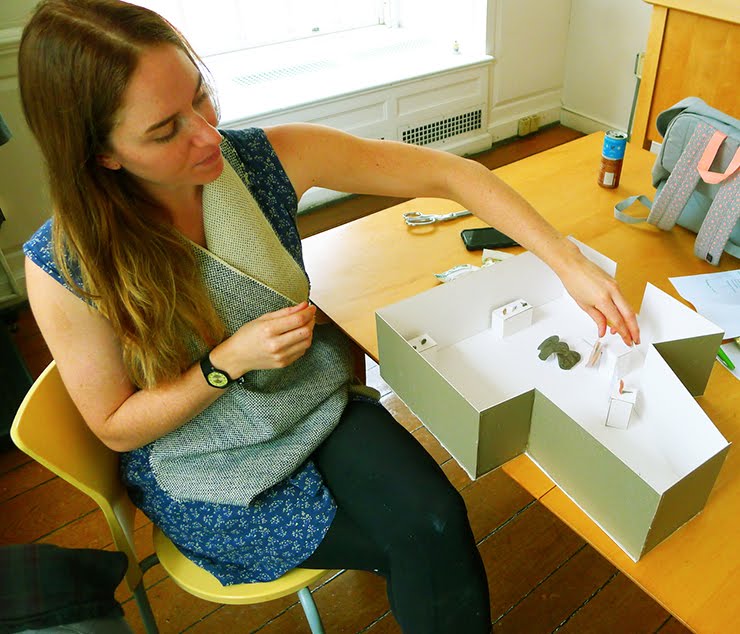 Senior Suzanne Alward 17 CR uses a model to consider how best to present her work in a gallery setting.

As every RISD student knows, there’s a lot more to earning a degree in the arts than mastering technical skills and developing a strong aesthetic point of view. Ceramics majors and MFAs enrolled in a fall seminar co-taught by thriving Brooklyn-based sculptor Nicole Cherubini 93 CR and historian/curator/studio potter Sequoia Miller are developing strategies for cultivating ideas in the studio and presenting their work to the wider world.

The seminar has two principal goals, says Miller. The first is to teach students research methods and provide other tools for advancing their studio practice. The second is to build a greater awareness of the context in which artists operate – to consider ways of shaping the public’s experience of their work by writing a meaningful artist’s statement, for example, or thoughtfully presenting their work in a gallery setting.

“It’s challenging to translate abstract ideas into a known language without narrowing them down too much,” Cherubini explains. She organized field trips to NYC and Boston, where students toured clay-based exhibitions, garnered ideas and discussed real-world practices with gallerists and museum curators at the Museum of Art + Design in NYC and the Museum of Fine Arts, Boston.

Students then worked to apply what they learned by mocking up proposed exhibitions of their own work, creating models of specific galleries and physically arranging miniature artworks within the spaces. Senior Suzanne Alward 17 CR (pictured above) and grad student Iggy Choi MFA 17 CR paired up to provide one another feedback. “If you keep the pedestals simple,” Choi offered, “they won’t distract from your work.”

Cherubini pointed out that there’s no “given” in arranging an exhibition space. “You can leave some areas empty or create a path for viewers to follow,” she noted. “It doesn’t have to be symmetrical.”

Alward admitted that she came into the class with preconceived notions about what galleries should look like: white walls, minimalist fixtures, simple lighting. But by the time she was working on the design of her own hypothetical exhibition, she thought, “Maybe I’ll mix things up by displaying some of these pieces outdoors.”

Grad student Yifan Renxu MFA 17 CR considered light gray walls for his gallery space but then decided the color was too close to the tones in his work. “And I want the room to be dark,” he noted, “with just one direct light on each piece.”

Renxu’s current work considers sexual violence and transcultural responses to expressions of sexuality. During a recent class with Miller in which students discussed the annotated bibliographies they’re compiling, he read aloud from a New York Times article about societal norms in China (his homeland) and marriages of convenience between gay men and women.

Miller noted that every culture produces “an archive of cultural residue” and encouraged Renxu to delve more deeply into this line of research. “Maybe do historical newspaper searches to see how journalists have written about these issues at different times and in different places,” he suggested.

Yang Chen MFA 17 CR is also considering how her Chinese heritage relates to her work. Her research led her to printmaker and installation artist Xu Bing, whose work she finds inspirational. When she spoke in class about experiencing brief moments of internal clarity in the studio that seem to get lost in her larger artistic practice, heads nodded around the table. “It’s easy to get caught up in technicalities and start questioning those moments,” said senior Chelsea Tapia 17 CR.

Miller reminded the group that no artist’s work emerges fully formed – that a practice comes together cumulatively, day by day. “Working in a specific discipline like ceramics,” he added, “you may find that repetition and the physical act of working can sustain you between those moments of inspiration.”

Assistant Professor of Ceramics David Katz revels in the resources, community and mix of disciplines he’s discovering at RISD.

As a RISD Museum Fellow, Margaret Finaly 16 CR worked with a professional conservator in caring for prized objects in the collection.

Ceramics Department Head Katy Schimert searches the ocean’s depths and captures the public’s imagination with a solo show and residency at UMass/Amherst.