Pioneering glass artist Therman Statom 74 SC returns to RISD to speak with students about the value of building community. 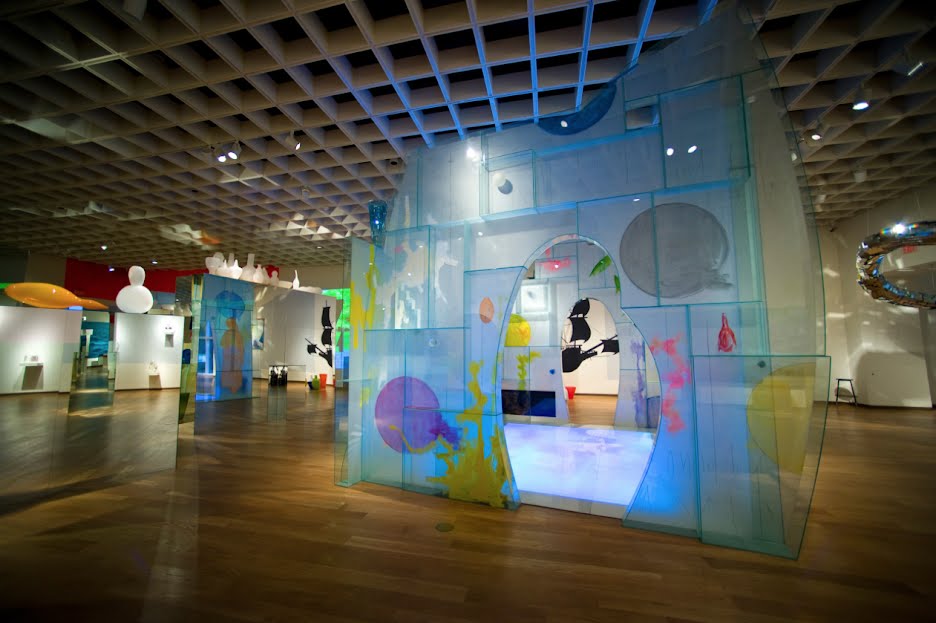 Therman Statom is known for huge installations like this one created for the Orlando Museum of Art featuring painted glass plate, blown-glass elements and found objects.

“I remember coming here and being totally terrified,” says visiting artist and alumnus Therman Statom 74 SC. “RISD is so different than it was when I was a student, but also the same. It’s still more important to learn while you’re here than to make ‘good’ work.”

“These are issues I talk about in my design practice as well as my teaching,” says Brown. “I want students to understand that bringing their personal backgrounds to the work makes it more inclusive. Having Therman here talking about his experience as a black student at RISD was super helpful.”

Statom shared his personal story with disarming candor. Moving from Florida in the 1960s to an affluent, largely Jewish Washington, DC neighborhood, he said his was the only black family for miles around and that he had no idea who he was or where he fit in. A curator at the National Gallery, where Statom “played hooky” from school, got him a job mixing clay and then introduced him to RISD administrators, who offered him a full scholarship.

“I was one of about 20 students of color at the time,” Statom recalls. “I remember the guy who ran our studios always wore a tux, cowboy boots and an eye patch.”

Despite his initial confusion and lack of confidence, Statom worked hard as a student at RISD and found his way first in the Ceramics department and later in Sculpture, where he earned his BFA two and a half years after matriculating. After RISD, he made a name for himself developing groundbreaking glass-working techniques along with fellow alums and lifelong friends Dale Chihuly MFA 68 CR and Toots Zynsky 73 GL. His massive, site-specific installations, which incorporate painted glass plate, blown-glass elements and found objects, have been exhibited across the country and around the world in such venues as the Smithsonian, the Orlando [FL] Museum of Art and the Toledo [OH] Museum of Art, among many others.

But Statom has made a point of reaching non-museum audiences as well, creating public artworks in the form of glass houses, ladders and huge chairs for hospitals, libraries and universities. And in recent years, his career has been increasingly focused on building community, working with special needs kids and leading workshops that catalyze social change, which is what brought him to Providence this winter. Before speaking at RISD, he participated in a panel discussion organized by the nonprofit Providence After School Alliance and led a workshop at the Providence Children’s Museum.

“Therman’s enormous creative and physical energy inspires everyone around him and probably pushes us all to do more,” says Zynsky. “He has a remarkable talent for connecting with kids.”

That talent has allowed Statom to bring joy and purpose to pediatric cancer patients, incarcerated youth and Native American kids whose heritage and traditions, he says, have been crushed by the US education system. “I’m trying to teach them to create new ceremonies and rituals,” he says. “And I don’t take this work lightly. I don’t do anything I can’t learn from—and the kids I work with teach me things all the time.”

Invested in Design for the Greater Good