In her latest survey at the ICA in Boston, Huma Bhabha 85 PR surrounds audiences with the eerie wages and wagers of war. 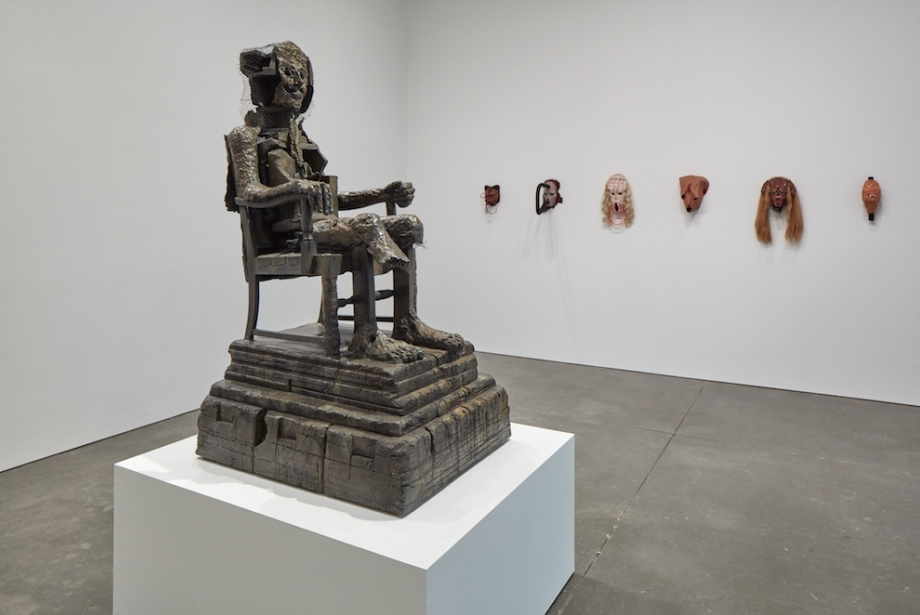 The Orientalist welcomes visitors to They Live, a survey of work by Huma Bhabha 85 PR at the ICA in Boston.

A year after her blockbuster installation We Come in Peace landed on the roof of the Metropolitan Museum of Art in NYC, Huma Bhabha 85 PR is again attracting attention through an expansive exhibition at the ICA in Boston.

Visiting They Live, a survey of the past 20 years of her work, is like looking at a battlefield—but at the smoke and rubble of its aftermath rather than the fight itself. Using familiar materials like cork, styrofoam, wood and chicken wire, Bhabha reveals the haunting scars of war. The physical tension of each piece emphasizes the message at the core of the work: namely that although violence disfigures and disrupts our humanity, it’s also tangible, accessible—closer at hand than we think.

“I do feel we have been living in apocalyptic times,” Bhabha recently told WBUR. “I am aware of the dark side. These ideas that are now mainstream I have been thinking of the last 25 years.”

Growing up in Karachi, Pakistan, Bhabha gained firsthand experience with how imperialism metastasizes. She has been making work out of her studio in Poughkeepsie, NY since the late 1980s, but with the advent and aftermath of the “global war on terror” has seen the specter of violence creep into the West.

Offering up a balanced cast of victims and destroyers, They Live presents contemporary warfare as a cycle stoked by ignorance and politics rather than as a basic battle between good and evil. This is clear when encountering Benaam, the giant supplicant under a shiny tarp—a recurring figure in her work that also made a powerful presence last year on the rooftop of the Met.

In the ICA show Benaam is the centripetal pull in one small gallery, where viewers recognize in the form shades of dead soldiers in body bags, crumpled burqas, a giant bag of trash—an ambiguous but clearly disturbing presence. “If you have anything like a soul, it’ll stop you dead,” writes Murray Whyte in The Boston Globe. “Alone and cast in low light, the piece is somber, affecting, reverent and abject; the figure either in prayer or surrender, last resorts both.”

It’s the most solemn piece in a show that frequently presents macabre realities in casual, almost comic ways. Bhabha is a fan of campy horror movies—They Live is a reference to John Carperter’s 1988 film by the same name—as is clear throughout the show.

At the entrance to the exhibition viewers are greeted by a phalanx of movie-monster masks with sunken, holographic eyes; further in, a sculpture titled Bumps in the Road reckons with grim battlefield slang for the bodies of murdered civilians—in wars like the recent one in Iraq.

Photo collages feature the fierce glares of graffiti-marked dogs and wolves. Special Guest Star positions a horned half-figure in a souvenir t-shirt on a gurney-like structure, an ashy smear where its legs should be.

“I find beauty in rawness, but I’m a happy person,” Bhabha says. “There’s a lot of humor in the work that is subtle.” But with that humor Bhabha brings attention to our collective instinct to gawk rather than withdraw from evidence of our darkest impulse: our willingness to destroy.

Bhabha’s ongoing urge to create—with her own hands—proves to be the real connective tissue of the ICA show. Its presence reaches a peak in the final gallery, where the trunks of looming statuary bring surface tracings and slashed cuts to eye-level focus.

It’s all intentional, yet somehow these carved and cast bodies feel ancient and alien at once, as if they had arrived en masse rather than through the efforts of the artist. “I think in an era where we are increasingly digitized, our bodies and our selves are divorced from the sort of tactile and primal functions that we embody as humans,” notes ICA curator Eva Respini. “Huma’s work comes as a matter of urgent necessity. And this is really... what makes her an artist of our time.”

Photographer Steph Foster MFA 19 PH reflects on racism in America and brings his stories of hope to Design Indaba 2019.