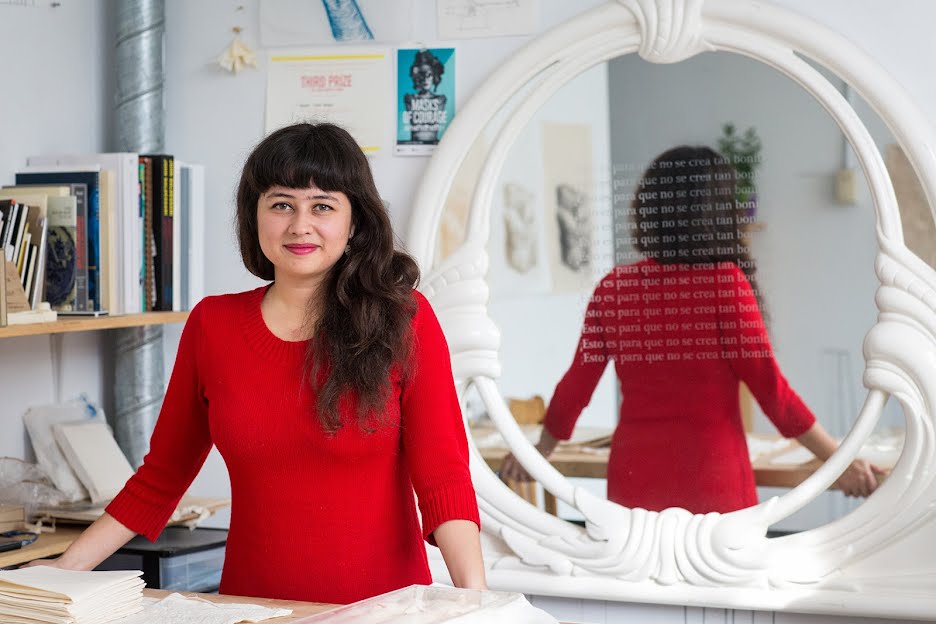 For as long as she has been working as an artist, Colombian graduate student Vanessa Nieto Romero MFA 17 PR has been telling women’s stories, questioning ideals of feminine beauty and drawing attention to violence against women. “At RISD I’ve been able to find the right balance between exploring these concepts and developing my technical skills,” says the artist, who is studying here on a Fulbright grant. “And I love interacting with all the different departments at RISD. It’s a very diverse community.”

In 2015 Romero and her husband Cesar Faustino co-launched a printmaking studio called Atramentum (Latin for ink) just before leaving Bogotá, but she does not define herself as a printmaker. Instead, she says, the content of each project leads her to the right materials and medium, driving her to master new techniques as needed in service of the message she’s attempting to convey.

Last fall Romero took part in a RISD studio that culminated in Drawing Parallels, Listening for Echoes, a site-specific, multidisciplinary exhibition mounted at historic Fort Adams in Newport, RI. In researching the 200-year-old brick fort, she responded to the notable absence of women in its story and ultimately created an installation memorializing the all-but-invisible laundresses (mainly Irish immigrants) who worked there in the early 1800s.

“Their labor mostly went unacknowledged,” says Romero. “And that absence of acknowledgment connected with the gaps in the walls of the fort itself. I needed to fill those gaps somehow and replace the materiality of the bricks.”

After learning to make soap by watching YouTube videos, Romero created a breathtaking installation, I Desire You Would Remember the Ladies, using bricks of handmade soap inscribed with the names of the laundry women. The contradictions inherent in names inscribed in soap only remaining legible for so long contribute to its strength.

As she begins to work on her thesis project, Romero is again considering contradictory concepts: strength and fragility, violence and renewal. Her goal is to raise awareness about the thousands of Colombian women who have been disfigured in the past 20 years through acid attacks. She is hoping to communicate with some of the survivors through a Bogotá-based foundation called Reconstructing Faces.

“I want my thesis to be a kind of correspondence with these women,” Romero explains. “The challenge will be representing both their fragility and their strength. I’m currently exploring the medium of papermaking as an act of healing ­– transforming materials to create a new surface or skin.”

With that in mind, over Wintersession Romero immersed herself in the study of papermaking through an independent study project with Graphic Design faculty member Suzi Cozzens 99 GD. She concurrently taught a class on bookbinding called The Artists’ Book after discovering a passion for the medium last year. “I realized that bookbinding is an important device I can use to convey the political and gender issues I’m talking about,” Romero explains. Case in point: One of the first books she created, Absent Body, won a prize in last year’s Student Artists’ Book Contest & Exhibition.

No matter the medium she’s using, Romero hopes that those who view her work will be taken by its “material magic,” that they’ll wonder how was that done? But she also hopes to evoke a visceral reaction. “I’m trying to raise awareness, create emotional reactions and generate questions about the magic of the process,” she explains.

Once she earns her MFA this spring, Romero and her husband hope to stay in the US for another year or two working as resident artists. “But as a Fulbright scholar, I’m committed to going back and teaching what I’ve learned,” she says. “And the art scene is growing in Bogotá. I hope to find the ideal balance between teaching and creating my own work.”

Graduate student Anina Major MFA 17 CR sees her ceramics practice as an expression of her commitment to furthering cultural tradition and making a positive impact on the world.