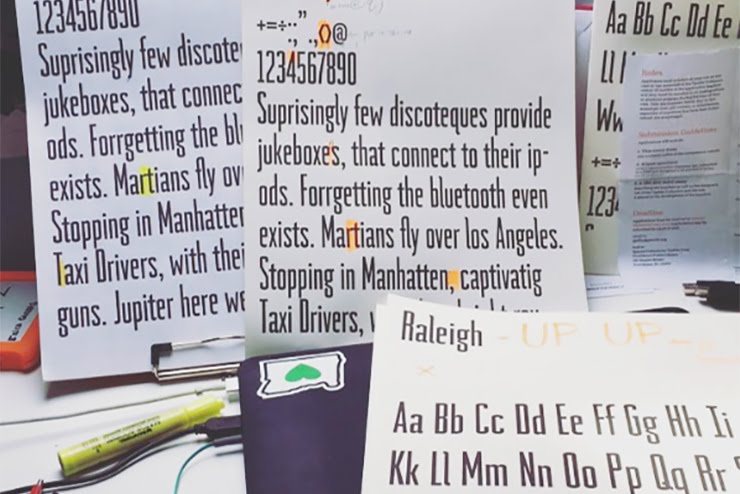 Printers, graphic designers and other type enthusiasts came together at the Chace Center on Monday, October 23 for the third annual Updike Prize for Student Type Design Awards presented by the Providence Public Library. The juried competition recognizes historically informed student type design and encourages local designers to make use of the library’s extensive collection of books on printing—some dating back to the 16th century.

Visiting speaker Nina Stössinger (right), a senior typeface designer at Frere-Jones in Brooklyn, got the evening off to a lively start with a fascinating talk—called Looking, Making, Questioning—about her own trajectory as a type designer. A native of Switzerland, she recently relocated to NYC, where she’s inspired by the countless examples of “gritty” vernacular type she encounters every day.

“The visual culture of New York serves as my extended reference library,” Stössinger says. “I’m constantly coming across unexpected moments of poetry.” By paying attention to the world around her, she explains, she’s essentially conducting research for her own designs and building an internal dictionary of shapes and forms she can tap into for future projects.

In the Making portion of her talk, Stössinger provided helpful advice about generating ideas, recovering from an overwhelming project and avoiding perfectionism. Noting that drawing is at the core of her creative process, she said it’s the tool she uses when she’s looking for new ideas and an infusion of energy. One such moment inspired her to make use of typecooker.com, a website that provides daily drawing assignments that are great for jump-starting new ideas.

Stössinger, who currently teaches at Yale School of Art, took the time during her talk to reflect on her own student days at the Royal Academy of Art in the Netherlands, where she earned an MA in Type and Media. Much to the dismay of her professors, she quips, she was determined to create a “reverse contrast” typeface breaking with Latin tradition by emphasizing horizontals rather than verticals. “Some rules make sense,” she notes, “and others are just conventions. It is always important to question convention.”

An aspiring designer in the audience asked how Stössinger’s background as a Swiss graphic designer has informed her work. There is a certain minimalism at the core of her style, she replied, that sprang from the mid-century modern design of her homeland. “I’m not good at adding or ornamenting,” she explains. “I’d much rather get out of the way and make my point with as little stuff as possible.”

And yes, experience using type in larger design projects has had a huge impact on Stössinger’s type design. “I understand how to use type as a tool and a material,” she says, “so I know what kinds of typefaces are useful.”

Stössinger’s talk led to the evening’s final moment of truth: Who would earn the Updike Award and collect the $500 cash prize? Both finalists are RISD-educated; recent grad Erica Carras 16 IL submitted Raleigh Condensed (top photo), while senior Joseph Allegro 18 GD developed a typeface he dubbed Meadows. The jury was so impressed with both designs that they decided to award two cash prizes this year: first place to Carras and second to Allegro.