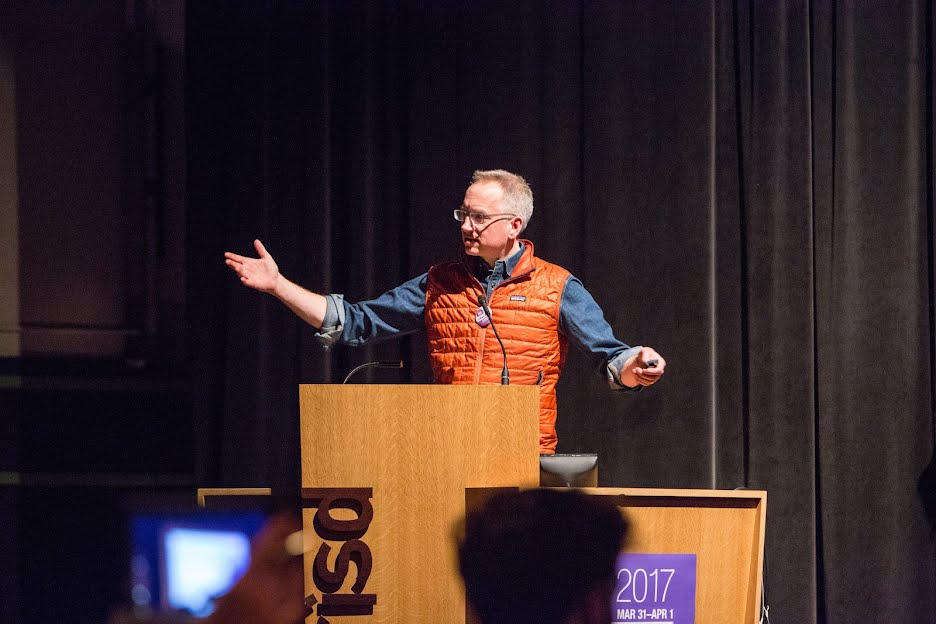 On March 31 and April 1, RISD hosted the 2017 conference of the northeast division of the Industrial Designers Society of America (IDSA), inviting students, educators and professionals to consider how they wish to contribute to the future of the field. As this year's title suggested, The Unexpected Conference offered an opportunity for systems designers, product designers, experience designers and other ID students and professionals to embrace the unexpected.

Two days full of panel discussions and workshops gave members of the RISD community and other designers from throughout the country—including those from leading organizations like Google, Johnson & Johnson and Sesame Workshop—valuable time to talk about the importance of design in everyday life. In welcoming participants in the RISD Auditorium, IDSA Executive Director Daniel Martinage noted that such events support the professional association’s mission to educate the greater public about a discipline that—based on how many people regularly visit the What is ID? page on their site—remains mysterious to many.

As the moderator of Friday afternoon’s session, Industrial Design Department Head Charlie Cannon pointed out the influence of design thinking on everything from Providence city government to robotics research at Brown and a thriving ecosystem of local nonprofits. Associate Professor Claudia Rébola along with fellow adjunct faculty members Mark Guarraia 05 ID and Nick Scappaticci 00 ID, a cofounder of the award-winning design firm Tellart, also brought their own perspectives to the two-day discussion. Bringing together specialists from such disparate fields, Rébola anticipated, would generate fruitful insights from speakers and audience members alike.

Getting the conference off to a strong start, Matt Wade, creative director at Google Interaction Design, and Mark Huang, Providence’s director of Economic Development, joined Cannon and Guarraia in discussing surprising discoveries that they have made as designers. As director of design at the Providence-based medical device company Ximedica, Guarraia spoke about how his field has seen a user-centered approach to product design supplant one that begins in laboratories. He also speculated on the potential of automated assistants like Amazon’s Alexa to assist seniors wishing to stay in their homes as their need for assistance grows—an advance that might not be that far away. When it comes to healthcare, “it is finally design’s time to shine,” Guarraia predicts.

Huang also addressed the role of design thinking in senior care, but from the perspective of public policy, arguing that investment in human-centered smart technologies would benefit the local economy while also improving the quality of life for a growing segment of the city’s population. During the same session, Cannon reflected on how his research and design priorities have led to unexpected ways of thinking. For example, by designing for the greater good, he began to focus more on the potential outcomes of his work. “Now it seems like I’m designing backwards in a fundamental way,” he said, aiming to establish “ecosystems of options for people to achieve their goals.”

After Wade concluded by telling the crowd: “If it doesn't exist…make it,” the speakers answered questions—first responding to a Q+A randomizer designed by grad student Charlotte McCurdy MID 18 that juxtaposed keywords from the panelists’ talks and then by responding to pairs of people in the audience who also crafted their questions based on keywords. The model helped generate such considerations as the impact of wearable technology on education and how income inequality affects transportation. In terms of the latter, Cannon mentioned research by a current ID graduate student exploring how plans for public transit in Rhode Island insufficiently address citizens in greater need of public services—something that reflects a pervasive tendency in transportation policy.

“These questions focus on some of the core ways that designers… think about where innovation and real substantive improvements comes from,” Cannon noted. “That means thinking about people’s experiences, how to translate them and how to alter and play with them in fundamental ways.”