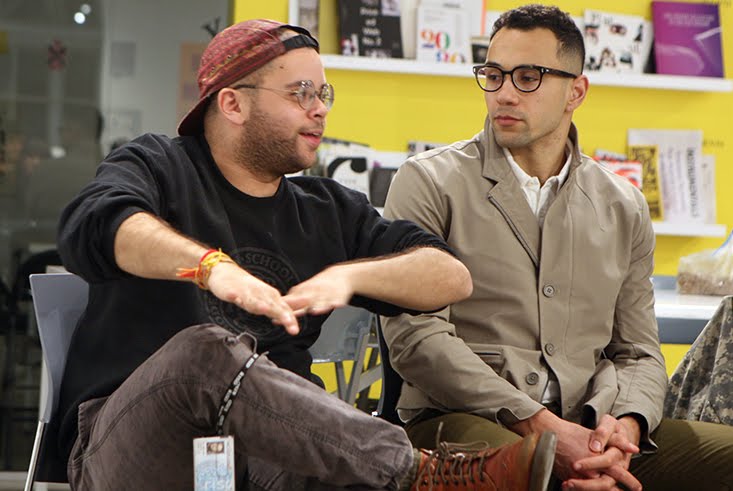 Focused on identity in design practice, an insightful four-week workshop series hosted by the Division of Architecture + Design wrapped up on Friday, January 27 with a look at designers and technologists who are taking a stand against unconscious bias and its far-reaching effects. Recent graduate Malcolm Rio MArch 15, who is now a post-graduate teaching fellow at the Maryland Institute College of Art, organized and moderated the You Are Your Work series, which came to a powerful conclusion with a mix of speakers that – as guest panelist and Architecture Professor Hansy Better Barraza pointed out – turned the Wintersession workshop into an ambitious mini-symposium.

Rio kicked off the session with a whirlwind recap of the series – a combination of lectures, roundtable discussions and hands-on workshops that could be taken for credit but were also open to anyone who wanted to attend one or more sessions – before introducing Rafael Sergio Smith, design lead at the global design firm IDEO. The entire series, Rio explained, was inspired by last spring’s Not Your Token rallies at RISD and the student-made film The Room of Silence,which expressed what it’s like to feel marginalized at RISD and miss out on content-focused critique in the studio.

More recent campus events have also spurred ongoing discussion about identity and diversity at RISD, Rio pointed out. The Q&A session following Emory Douglas’ 2017 MLK Series keynote address, he said, “got real, real quick” and once again raised questions about how RISD as an institution is responding to student demands for equity and representation and how faculty can accelerate the rate of change. “The curriculum – and particularly class syllabi – are not neutral ground,” he noted. “Issues of identity and white privilege are everywhere, and ideas about diversity need to be written into the core curriculum.”

Rio emphasized that white people need to be part of the conversation about institutionalized racism. Smith ran with that idea by seguing into the universal issue of unconscious bias and how it perpetuates homogeneity in the tech and design worlds. “We must stop pretending that one type of designer can empathize with everyone else in the world,” he said.

The key to creating diverse design teams, Smith noted, is to take a data-driven approach. The technology sector, for example, is still 75% male and 93% white, and many firms rely on internal referrals when it comes to hiring. Executives at social media giant Pinterest discovered that proactively encouraging employees to refer job candidates from underrepresented ethnic backgrounds led to a 55% increase in minority referrals. “Better information and better communication,” Smith said, “clearly led to better decisions.”

Airbnb, the global online travel accommodations site founded by two RISD alumni, has also taken advantage of diversity and inclusion design opportunities, introducing simple plugin tools that allow people who are renting out their homes and other spaces to “de-bias” their online interactions. And software company Textio is helping employers to “hire smarter” by removing cues about race, ethnicity and gender from job descriptions and job applications. The technology these companies are developing, says Smith, “leverages storytelling and design to erode false perceptions and build new narratives.”

Smith also shared several innovative uses of technology in the sphere of social justice, including Clouds Over Sidra, a Virtual Reality film that allows users to walk in the shoes of a 12-year-old Syrian refugee living in the Zaatari Refugee Camp in Jordan. Tools like this, he explained, make invisible societal forces visible and enable true empathy. Imagine, he opined, the long-term effects such approaches could have on intrinsically biased institutions like public education and the criminal justice system.

Activist in the Making

Rising senior Lucy Crelli 17 AP hopes to pursue a career at the intersection of art, design and activism.