President Rosanne Somerson partners with other leaders in higher education to speak out on Dreamers prior to the Supreme Court case in November. 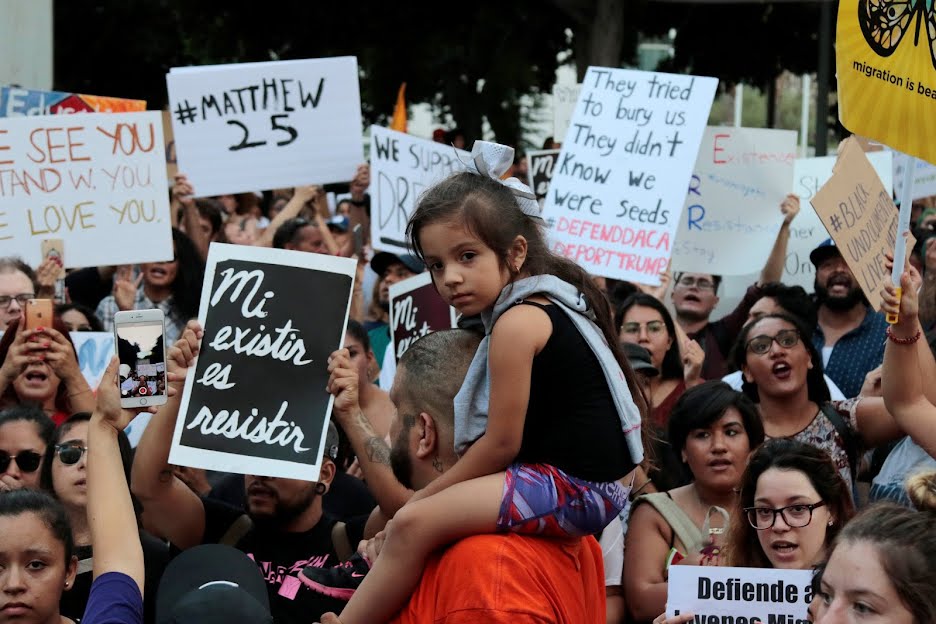 Protesters take to the streets to try to retain the rights spelled out in the Deferred Action for Childhood Arrivals program.

On November 12 the US Supreme Court is set to consider the legality of the Trump administration’s 2017 decision to eliminate the Deferred Action for Childhood Arrivals program. Best known as DACA, the program impacts hundreds of thousands of Dreamers—children who came to the US as children or were born here to parents classified as undocumented immigrants. Many are now current and prospective students at RISD and other American colleges.

In anticipation of the court hearing, President Rosanne Somerson has been working with other college and university leaders across the country to express RISD’s support for Dreamers and for keeping US immigration policies open and flexible.

Among the initiatives Somerson has endorsed are a “friend of the court” brief signed by 165 college and university presidents across the US and filed this month in anticipation of next month's Supreme Court hearing.

In addition, Somerson co-authored a statement with her counterparts at Maryland Institute College of Art, the School of the Art Institute of Chicago and The New School’s Parsons School of Design that makes a case for upholding the rights of Dreamers.

“Central to the aspirational promise of America is the bedrock belief that we are all equal–regardless of the circumstances of our birth–and our flourishing takes place on a level playing field,” the statement reads. “As leaders of art and design colleges where creativity is a driving force, we foresee a particular threat to the cessation of DACA: a curtailment of our country’s imagination and a foreclosure on our national dream.”

The higher education amicus brief filed with the Supreme Court points out that since 2012, DACA has been extraordinarily successful, offering temporary protection from deportation and the ability to work legally to more than 700,000 young immigrants who came to the US as children. The program has benefited these Dreamers, their families, their communities and the US economy.

Since the Trump administration announced in September 2017 that the DACA program would be eliminated, the fate and future of hundreds of thousands of young people who grew up in the US have been uncertain. In the past two years, multiple courts have kept renewals ongoing for current DACA recipients, but Dreamers have been living in fear of being separated from their families and the lives they have built here over decades.

Once the Supreme Court considers arguments in November, a ruling is expected in early 2020 that will determine whether Dreamers will retain the right to live, study and work in the US.