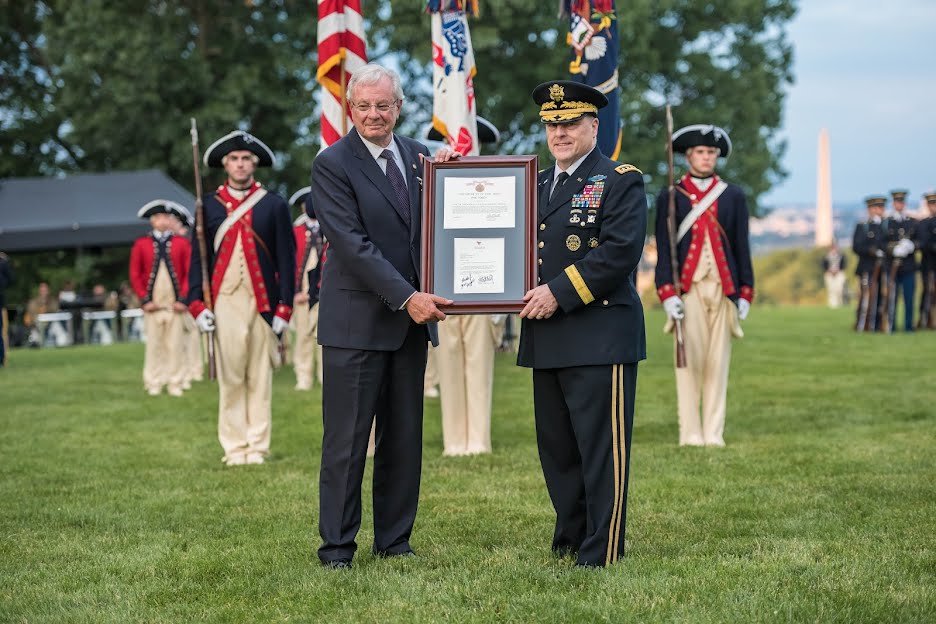 Architect Phil Tobey BArch 65 accepts an Outstanding Civilian Service Award from the US Army for his pioneering work in designing effective healthcare facilities.

On June 6 RISD alumnus and honorary trustee Phil Tobey BArch 65 of SmithGroup JJR accepted an Outstanding Civilian Service Award from US Army Chief of Staff General Mark A. Milley. A former officer in the US Air Force, the architect has devoted the past four decades to designing more effective healthcare facilities and was recognized for two groundbreaking veterans’ treatment facilities: the Center for the Intrepid (CFI) at Fort Sam Houston in San Antonio, TX and the National Intrepid Center of Excellence (NICoE) in Bethesda, MD.

The CFI, which opened in 2007, provides state-of-the-art rehabilitation for soldiers recovering from severe injuries, burns and amputations as well as sophisticated translational research in prosthetics, robotics, virtual reality and biomechanics. It houses cutting-edge technology, such as a 300-degree virtual reality immersion environment and an advanced gait analysis laboratory developed specifically for the CFI.

Completed in just 18 months, the CFI is clad in South Dakota granite and features clerestory windows and a classic stepped metal roof design. Veterans are greeted inside with an indoor pool with wave technology, an elevated running track and a state-of-the-art climbing wall.

Since opening its doors in 2010, the NICoE has been recognized worldwide as a center for advances in research, diagnosis and treatment of traumatic brain injury (TBI), one of the most common and complicated problems facing veterans of the wars in Iraq and Afghanistan. The NICoE was specifically designed to foster a multidisciplinary approach to rehabilitation that integrates next-generation clinical and research technologies with deeper family involvement.

In planning the project, Tobey and the design team worked with clinicians and researchers to develop a program and operational concept that merges evidence-based design with neurological studies. Every element of the building—including the chapel, auditorium and therapy space—is attuned to the special sensory and wayfinding needs of TBI patients. And feedback from these patients drove each design decision, from lighting and acoustics to safety and privacy. Overall, the resulting warmth of the atmosphere promotes healing and hope.

As principal-in-charge of both facilities, Tobey is delighted to see their models of care being replicated in satellite rehabilitation facilities across the country. In addition to this most recent recognition, he has served as an architect on special assignment to the White House for all executive branch medical facilities and was awarded the US Air Force Commendation Medal for his contributions to developing new programming and planning criteria for Army, Navy and Air Force medical facilities. In 2012 Tobey earned the Urbahn Medal from the Society of American Military Engineers, which is awarded to one person a year for excellence in design, and in 2013 he was appointed to the Congressionally mandated Independent Review Panel on Military Medical Construction Standards.

“Phil’s unparalleled accomplishments in the field of military rehabilitation centers make a profound impact on the lives of veterans and their families, and are a testament to the power and reach of artists and designers in every field,” says President Rosanne Somerson 76 ID. “He is a tireless champion of the ideals RISD was built upon, and we couldn’t be more proud of his important work.”

Preservation Along the Potomac

Architect and artist Ming-Yi Wong MArch 10/PB 11 GL brings a studio approach to her work at the National Park Service in Washington, DC.