When Macarthur Award-winning artist Kara Walker MFA 94 PT/PR returned to RISD for an open conversation, students were hungry to hear her thoughts. 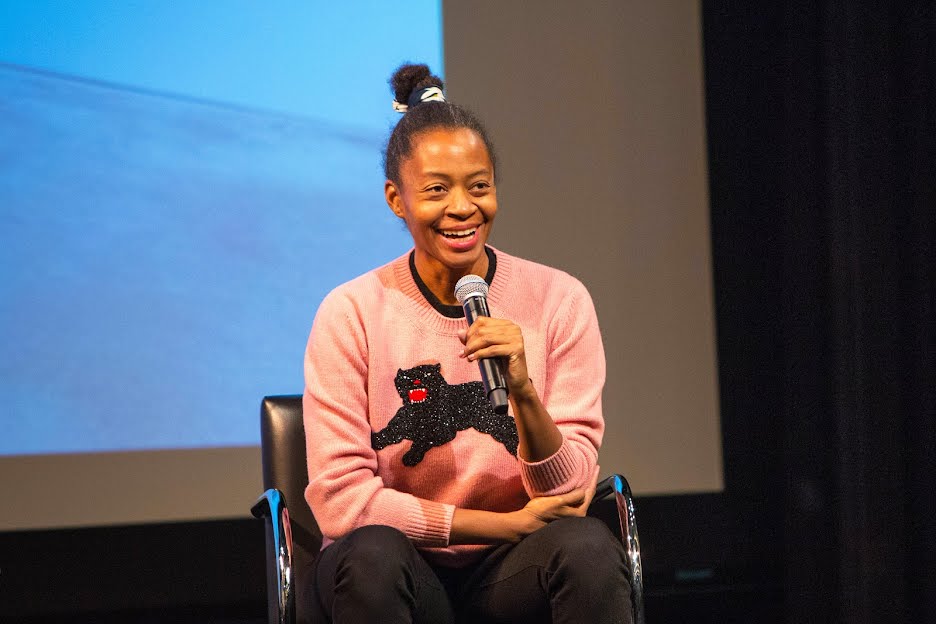 MacArthur Award-winning artist Kara Walker MFA 94 PT/PR was totally candid when she returned to RISD on November 18, 2016 for an open conversation with members of the campus community. Sponsored by the RISD Museum and moderated by Richard Brown Baker Curator of Contemporary Art Dominic Molon, the rare appearance allowed Walker—who has made a huge impact on the world and is especially revered in the RISD community—to speak directly to current students and respond to the (tough) questions they posed.

Though critics have long accused Walker of going too far, she told students that she hopes they never have to face such harsh criticism. At the same time, she also encouraged them to try to be thick-skinned as artists and to “use [their] work to get centered.”

During the two-hour conversation in the RISD Auditorium—which was packed to capacity—Walker spoke a lot about her artistic process: jogging ideas loose by writing and by drawing and painting with watercolors. “I use [these techniques] as a way to figure out what it is I’m ignoring or trying to suppress,” she explained. “It’s all improvisation and stream of consciousness in response to whatever is aggravating me.”

The provocative drawings, paintings and cut-paper silhouettes Walker creates unpack America’s history of racism and violence and demand the viewer’s attention. Still, she admitted, in a world still struggling with brutality and gross inequality, “art can only do so much.”

Of course, since no RISD conversation would be complete without some mention of crits, Walker joked that the steady stream of difficult questions she (gracefully and thoughtfully) fielded from Molon—who read from the questions students had submitted in advance—was “the hardest crit ever.” She also offered helpful advice about coping with criticism and preventing it from derailing them.

“I’m drawn to things I’m afraid of—like a moth to a flame,” Walker noted. “But I do my work because I have to do my work…. Sometimes I’d rather do nothing, but I need to respond to things that are aggravating me and not get complacent.”

Internationally known painter and MacArthur Award winner Julie Mehretu MFA 97 PT/PR is currently showing her work in two solo exhibitions on opposite sides of the Atlantic.