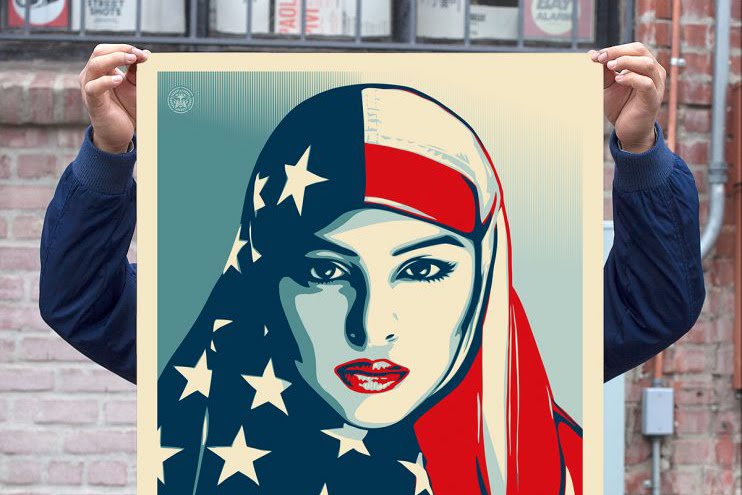 A new series of We the People posters created by artists Shepard Fairey 92 IL, Jessica Sabogal and Ernesto Yeren sent a clear message at the Presidential Inauguration ceremony in Washington, DC on January 20. The idea was to “reject the hate, fear and open racism that were normalized during the 2016 presidential campaign” with images representing inclusivity, dignity and human rights.

In 2008 Fairey created the iconic HOPE poster than helped usher in the presidency of Barack Obama. Recently, he partnered with The Amplifier Foundation (which calls itself “an art machine for social change”) to raise funds to buy full-page ads in The Washington Post on January 20 featuring the We the People images that he, Sabogal and Yeren created to represent the America they believe in.

“It’s hard to encapsulate the complexity of what we’re facing going into this Trump presidency in three images,” Fairey says of the prints he made for the project. But as a counterpoint to the divisive rhetoric of the campaign, he focused on “groups that are vulnerable” and added simple messages of resistance and affirmation below each image.

Thanks to a super successful Kickstarter campaign that ended on January 19, The Amplifier Foundation raised almost $1.4 million from 22,836 backers to help bring this project to life. The group invited “people across the capitol and across the country” to tear the ads out of the Post and “carry them into the streets, hang them in windows or paste them on walls” by way of advocating for the value of diversity and inclusivity to life in America.

All five We the People posters – along with three others created specifically for the Women’s March on Washington that followed on Saturday – were available to download for free from the Amplifier site.

Standing Up for Equal Rights