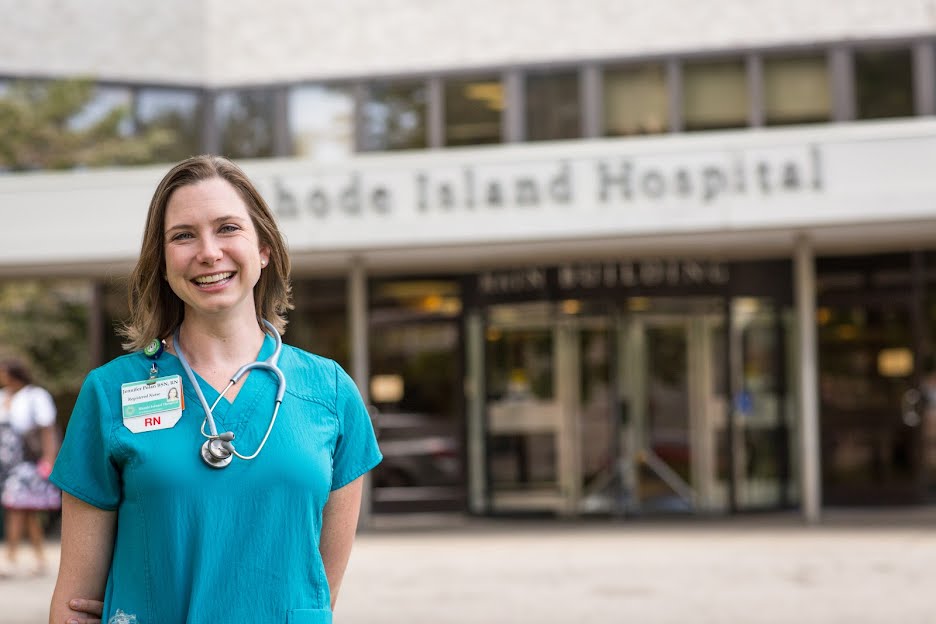 When Jennifer Polan 01 IL began working at Rhode Island Hospital (RIH) 10 years ago, clearing the emotional space to sustain a studio practice proved to be a daunting challenge—especially since her passion is illustrating for children. Working between eight- and 12-hour shifts as an inpatient trauma nurse, she supports people coming out of major surgeries or who have suffered catastrophic accidents and rely on her for all aspects of coordinated care.

“It was hard at first to go home and try to sit down and draw pictures of cute cats,” Polan admits. “I couldn’t stop thinking about what my patients were going through.” But over time she discovered how to strike a balance between the trauma unit and the studio: she took to gardening at her new home outside Providence—and she made some important changes in her media diet.

“No medical procedurals. No Dexter or The Walking Dead. That helped.” Now Polan has reignited an active studio practice and is as motivated to push it forward as she was while working deep into the night as an Illustration major.

As a high school student in Doylestown, PA, Polan worked in a children’s bookstore where original artwork by recognized author/illustrators dressed the walls. “Every day,” she recalls, “I saw what I wanted to do.” At RISD she learned from faculty mentors such as Mary Jane Begin 85 IL and Judy Sue Goodwin Sturges 66 IL how to tackle the complex design and storytelling challenges behind seemingly simple books. “There are all these crazy design puzzles to solve,” she says. “Before coming to RISD I had no idea how much went into making a book.”

However, the person who had the most enduring influence on Polan’s work is the late Professor Emeritus Tom Sgouros 50 IL, who taught her to make watercolor paintings with confidence. “Watercolor is all I do now and it’s all because of Tom,” she says. “I keep a framed picture of him in my studio.”

After graduation Polan initially hired an agent and joined the Society of Children’s Book Writers and Illustrators. But she didn’t feel the same focus or drive to succeed as she had at RISD. “I just wasn’t ready yet,” she says in retrospect. So when her family encouraged her to switch course and pursue a career in nursing, she took their advice.

“I had no idea what I was getting into,” says Polan, who studied nursing at Rhode Island College while finding time to keep her studio practice sharp. In many ways, the work ethic she learned at RISD prepared her for the academic challenges of her new field—in ways that surprised her fellow nursing students. “Some assumed that art school must have been easier for me,” she notes, “but that’s not true at all. I studied for nursing all day but I didn’t stay up all night studying,” she notes. “At RISD I was up working all night.”

As Polan has spent more time in the studio in recent years, she has discovered fruitful synergies between her seemingly disparate professions. She finds that talking to patients about art helps distract them from pain. The amount and intensity of human interaction she experiences as a nurse has also helped her creatively. “I think it will really help me write better stories,” she says.

Polan’s empathy for others comes through in her current book project—one she originally began more than 16 years ago at RISD. Based on personal experience, Strawberry Pie connects homemade comforts to a child’s response to a neighborhood flood. Among the several narrative inventions the artist has added is a scene that takes place in a temporary shelter—an acknowledgement of the personal costs of climate change. She has also received vital feedback and useful time-management advice from an “amazing” critique group of professional illustrators she met through RISD Continuing Education.

With Strawberry Pie near completion, Polan has begun to develop new projects and plans to hire an agent to help maintain her momentum. She’s also working to rediscover the loose, liberating painting style she learned years ago from Sgouros—all while caring for patients who depend on her.

“Nursing and illustration are so different, but the path I have taken works for me,” Polan says. For her, embarking on a radically different career has made her an even more confident illustrator—and readier than ever to make that dream happen.

This summer RISD honored the memory of Tom Sgouros 50 IL with Master Class, a summer exhibition of work by the alum and late professor.