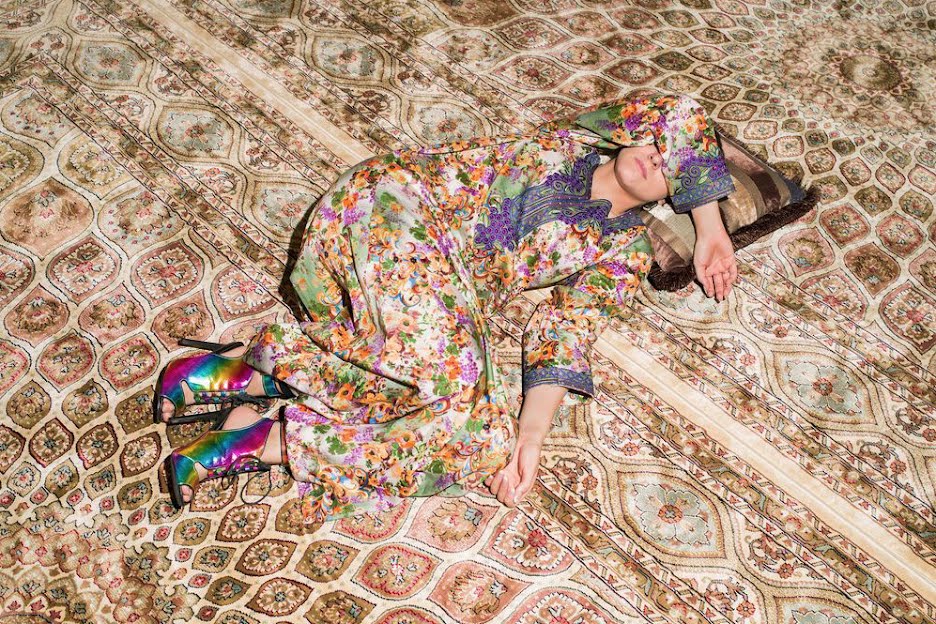 NYC-based artist Farah Al Qasimi, who’s teaching in Photography this year, recently won a 2018 Individual Photographer’s Fellowship from the Aaron Siskind Foundation (the late photographer and former RISD professor helped establish the Photography department’s strong reputation in the 1970s). Her work reflects on stereotypes about gender and ethnicity. Born in Abu Dhabi in 1991, she earned an MFA from Yale in 2017. Recent exhibitions include More Good News at Helena Anrather (NYC), No to the Invasion: Breakdowns and Side Effects (CCS Bard) and Coming Up Roses at The Third Line (Dubai). Here she speaks about her creative practice and the joys of teaching at RISD.

Congratulations on earning the Aaron Siskind fellowship. What do you plan to do with the funding?
I’m planning to use it for a project I’m working on when I go home to the Emirates in January. I’m making a film about the presence of jinns—or Islamic spirits—in the area where my family lives.

Are they good spirits or bad?
They’re said to be mostly neutral, and rarely interact with humans, but there are stories of the occasional possession and exorcism. My grandmother has some good stories.

Will this be your first foray into filmmaking?
I’ve made video work before, but this is the first time I’m primarily collecting footage from the world as opposed to making it in a studio. It will be an experiment in organization (and with some site visits, a possible exercise in bravery).

Your previous work in still photography comments on stereotypes and historic portraiture. Are you moving away from that line of inquiry?
I am, yes. When I moved to the US, I was constantly expected to respond to stereotypes about the Arab world and I find that so uninteresting. I eventually realized that the more you stand in opposition to something, the more you legitimize that flawed perspective. I’ve tried to free myself from that task.

You’ve said in the past that as a photographer you want to cede responsibility to people viewing your work. Can you say more about that?
I’m very interested in how people read images. My first NYC show, More Good News, was hung as a very simple, traditional exhibition of framed photographs, but the relationships between them were not immediately obvious. I wanted to awaken the latent assumptions viewers might have had about the subject matter. Indeed, most people assumed that the more visually violent images—like Piper at Barbeque in Houston—were made in the Middle East. For the record, I’d never even seen a gun until I moved to the US.

I love the way that you use shadows in your images. What’s the impetus behind your approach?
I was thinking about how shadows are used in Disney movies: the bad guys always have crazy, menacing shadows that creep into the frame before you see their actual figure. I like the idea that a person’s shadow can reveal something about their character that isn’t otherwise visible.

Do you find it difficult to balance your creative and teaching practices?
I think they feed off of each other. In addition to teaching at RISD, I teach at NYU. What I particularly love about RISD is the students’ dedication to their work. It’s amazing to witness. And there’s a real sense of campus life at RISD—a sense of community and purpose.

Are you teaching any classes in the spring that you’re especially excited about?
I designed a class called How to Be Anxious: Critical Issues in Photography. It’s a practical workshop looking at the history of responsibility, ethics and politics in photography and film. We’ll be reading Adrian Piper, bell hooks, Ariella Azoulay, Jalal Toufic and so many others—and thinking about our roles as artists and community members.

How do you feel about making work in the current political climate?
I believe in accessing the political through the personal. When Trump became president, a lot of people shifted their work with the sentiment of, “Oh, now our work has to be political.” My work has always been political and has attempted to access wider conversations about gender, desire, vulnerability and power. The current wave of global fascism is attempting to stamp out individuality, criticality and dissent. I think the best thing I can do is continue making work that comes from a genuine place of concern and curiosity.

Continuing the Conversation in Doha

Farah Altaweel MA 17 talks about transitions and her unconventional approach to combatting #fakenews.

As Photography major Zai Rutter 19 PH prepares for a reading-intensive independent study this spring, issues of identity, language and authenticity are top of mind.