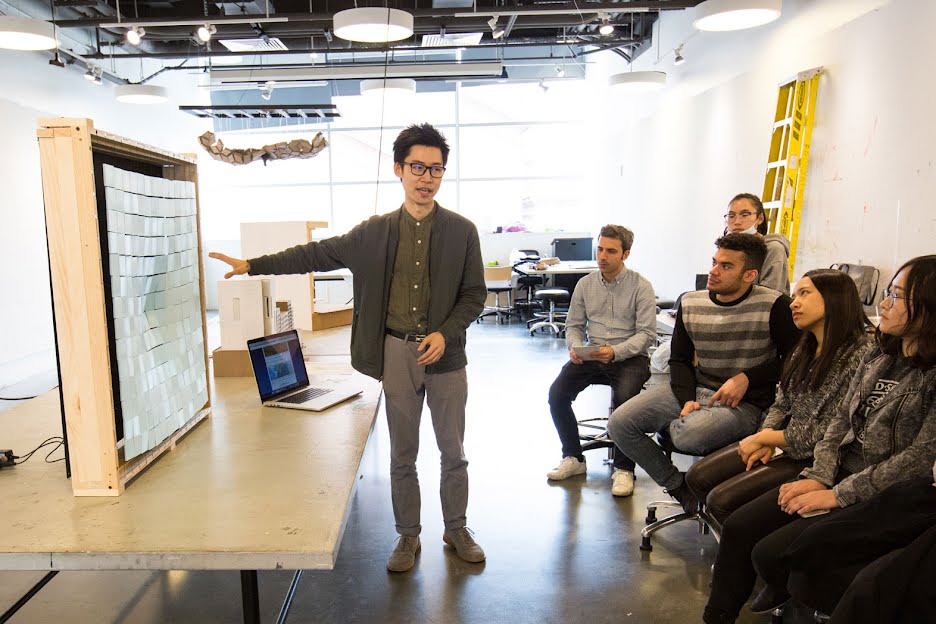 In a spring studio called Ambient Interfaces, grad student Nil Shang MArch 18 programmed his sculpture to respond to the orbit of the International Space Station.

As people increasingly turn to computers and smartphones to run their lives, tech firms and other businesses create a seemingly endless array of tools designed to streamline digital activity. And although we benefit from these innovations, there is much about them that runs counter to the artistic imagination. Recognizing the growing desire of artists and designers to exploit the creative potential of new technologies, this spring RISD launched Computation, Technology and Culture (CTC), an undergraduate concentration that invites students to experiment with digital devices, programs and languages, and integrate them into their diverse studio practices.

Experimental and Foundation Studies (EFS) Programs Head Shawn Greenlee 96 PR, who administers the new concentration, says a central goal is to foster more versatile makers by limiting dependence on proprietary hardware and software. “We want students to resist using technology the way creators think they’re supposed to use it,” the electronic media and sound artist explains. Through the new 15-credit undergraduate concentration (which is like a minor at other colleges), students learn to write code, develop software and build programmable machines while also coming to better understand how these things are transforming art, design and the world at large.

Greenlee began leading efforts to establish a CTC concentration once the interest and need became increasingly apparent in recent years. In co-teaching a course called Experimental Data Visualization, he realized that students were searching for ways “to engage with [digital] code as a medium and material.” Soon he and fellow faculty members Carl Lostritto and Clement Valla MFA 09 DM began applying for various grants and other sources of funding to plan a cutting-edge curriculum suited to the needs of emerging artists and designers.

CTC “creates pathways for students to specialize” in many areas of digital art and technologically-informed making, says Greenlee—from programming for music and sound design to creating virtual-reality and immersive environments. Concentrators can also take related courses in diverse departments—from Sculpture studios on robotics to Liberal Arts courses on the history of technology—to build a highly individualized, interdisciplinary experience. Designed for those at all levels of experience with programming and code, the concentration is expected to attract roughly 50 students a year as it continues to grow.

Initial courses
In addition to the core Introduction to Computation studio, this year’s innovative CTC courses explored various aspects of our increasingly programmed world, from internet-age art and architecture to sonic sculpture and, in a Wintersession travel course to Argentina, the intersection of digital and artisanal cultures. Through spring studios like Ambient Interfaces: Activated Objects, taught by Assistant Professor Alejandro Borsani, students made use of conceptual approaches and learned practical strategies for integrating electronics into their work.

In the studio, participants experiment with sensors, open-source computational tools and more to create everyday objects that are programmed and user-responsive. For the final critique, they presented work that demonstrates an impressive range of possibilities, including a pair of environmentally disruptive potted plants by Weibo Chen 16 PH and an abstract sculpture by Nil Shang MArch 18 that is programmed to move once every 92 minutes—the same amount of time it takes the International Space Station to orbit the planet.

During the crit, Borsani and Associate Professor of Digital + Media Matt Kenyon encouraged students to better align their inventive designs with research and to preserve the creative impulse while trying to solve technical problems. “Remember that you’re an architect, not an engineer,” Borsani told Carlton Smith MArch 17 in response to the grad student’s wired model for a turbine-powered NYC city block.

In addition, CTC concentrators also learn from a range of visiting speakers such as roboticist/artist Ken Goldberg and electronic musician Ben Casey from the sound design company Ableton. Greenlee and Valla (who will serve as CTC coordinator while Greenlee is on sabbatical during the 2017/18 year) also have other interesting speakers and visiting artists lined up for the coming year, along with fascinating courses like Seeing Machines, an investigation of new imaging technologies that Valla is teaching next spring.

Although concentrators gain expertise in many aspects of coding and computation, Greenlee is quick to point out that CTC is not designed to be a computer science program in the traditional sense. “We want to make something that makes sense for RISD,” he says, underscoring the emphasis on artistic ingenuity. For students, “CTC is about freedom” and empowering them to break, remake and master digital tools to further their own practices.

Exploring the Future of Education

The first recipients of RISD 2050 Fund grants imagine radical changes in art and design education in response to a rapidly changing world.