Visiting architect Dong-Ping Wong talks about his unique approach with both undergraduate and graduate students. 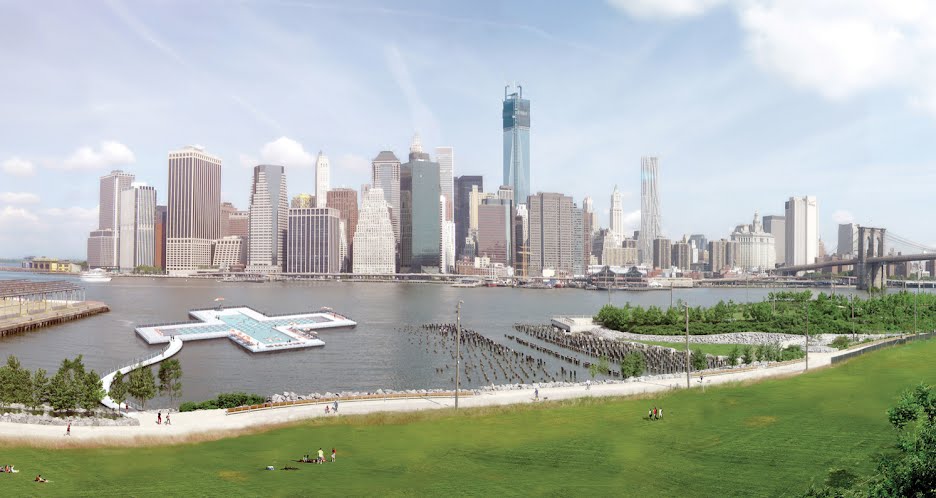 The walls of Family New York’s floating + POOL would act like a giant Brita filter, cleaning half a million gallons of water per day in the city’s East River.

Architect Dong-Ping Wong knows how to have fun. When he visited RISD’s Architecture department to speak on November 30, the San Diego native shared with students the importance of finding joy in their work.

“The field of architecture could be a lot funnier,” says Wong, who’s now based in NYC. “I find that incredible but absurdly impossible ideas make me giggle.”

As co-principal with Oana Stanesco of the “environmental design firm” Family New York (in Manhattan’s Chinatown), Wong straddles the worlds of “serious” architecture and pop culture with high-profile projects including over-the-top stage designs for pop star Kanye West. The traveling set for West’s 2013 Yeezus tour featured a giant LED sun, a tractor beam that seemingly lifted the performer off the stage and an enormous moveable mountain. Describing West as “the hungriest person I’ve ever met,” Wong says that working with him is incredibly inspiring.

Since the recession hit in 2008 Wong has been concentrating on civic-minded, publicly funded projects that are focused on productivity and “making a positive impact on the larger world.” One such project, the + POOL, has catapulted Family New York into the spotlight and taken most of Wong’s time since 2010.

The floating, plus-shaped pool would actually clean half a million gallons of water per day in NYC’s East River—“kind of like a giant Brita filter,” Wong explains. The layered filtration system incrementally removes bacteria and contaminants to ensure that the pool is filled with nothing but clean, unchlorinated, swimmable water that meets both city and state standards.

Wong launched a nonprofit to execute the project in part to keep the pool public and avoid the temptation to partner with commercial, private investors. His team has raised more than $300,000 via Kickstarter to fund testing, and he hopes to actually build the pool in 2021 (after obtaining a boatload of necessary permissions from the Department of Health and galvanizing the new legislation that will be required) for a total cost of about $21 million.

“The timing was critical,” says Wong. “We could not have launched this project 10 or even five years earlier than we did. Architects are generally good at responding to problems and working within constraints,” he adds, “but this project began with an absurd idea and basically reversed the direction of the steps taken in a standard architecture project.”

Students, faculty and visiting artists consider the link between digital interfaces and the imagination as part of RISD’s new tool ( ) series.