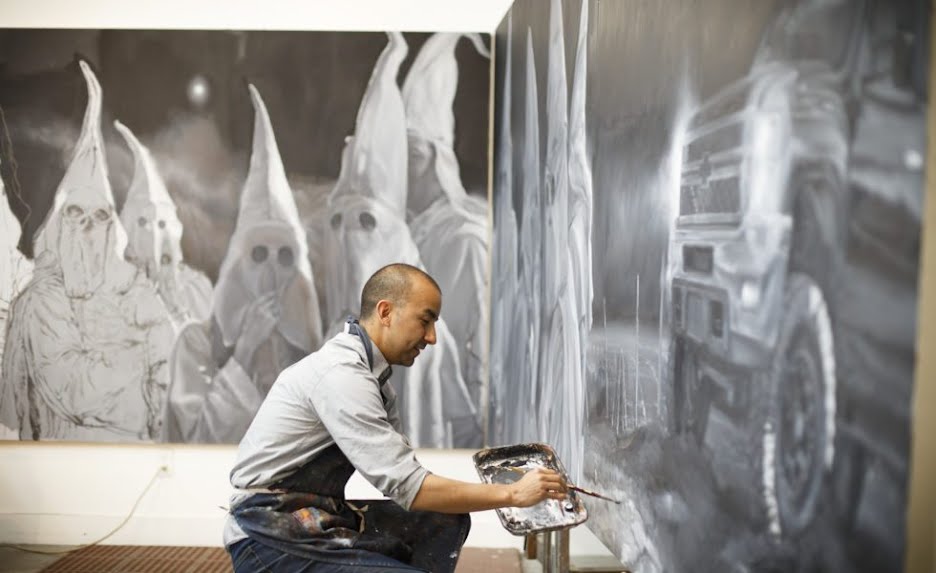 Valdez says that his painting The City I grew in size and intensity due to the social and political climate when he was making it in 2016.

For Vincent Valdez 00 IL, the aspects of American society that haunt his paintings have only gotten worse in recent years. In a talk at the RISD Auditorium on November 16, the Texas-based artist lamented how the issues that inform his work—including border politics, the military-industrial complex and racial profiling—seem even more relevant today than they did when he began focusing on them at RISD in the late 1990s. “It’s startling and very alarming to look back at these images,” he says, “because, if anything, these [problems] are now on the increase.”

But rather than getting disillusioned, this realization drives Valdez to keep making images that connect past and present-day injustices. From Kill the Pachuco Bastard! (2001), a satirical take on the Los Angeles Zoot Suit Riots of 1943, to the chilling portrayal of modern-day Ku Klux Klansmen in his acclaimed 6- x 30-foot painting The City I (2016), the artist continues to devote his practice to “unfolding an epic narrative [of] the American experience” that confronts its harsh realities head-on.

Speaking as part of the Glass department’s fall visiting lecture series, Valdez recalled his childhood in San Antonio, where he learned to paint from an artist who made murals for local housing projects. Without access to a formal arts education, he learned through this experience “the power of [making] images—especially when you connect them to the viewer and their lives.” He also continues to draw inspiration from the photography of Larry Burrows, whose images of the Vietnam War taught him “the drama of the human figure [and] the epic and endless struggle of being human.”

Coming to RISD as a transfer student, Valdez majored in Illustration, learning from faculty members like Lenny Long MFA 83 PR how to have fun with serious subject matter by turning his ideas into visual “riddles [that are] densely layered with elements of history, photographic references and personal narratives.” And although some mentors cautioned him not to focus so intensely on social issues, he took their discouragement as a challenge. “When people told me not to make this kind of art,” he told students, “I just thought, ‘watch me.’”

Following his convictions has worked well for Valdez. Since graduation he has exhibited throughout the world and his work is included in the permanent collections of the National Museum of Mexican Art and the Museum of Fine Arts, Houston, among others. Responding to The City I a year prior to the spate of hate-group demonstrations in the summer of 2017, Catherine D. Anspon wondered in Paper City MagazinePaper City Magazine if Valdez is “the artist for the post-Iraq invasion/post-Wall Street meltdown,” and Lawrence Downes of The New York Times called the painting “a selfie for 21st-century America.”

During his talk on campus, Valdez described The City I as an attempt to portray the KKK as central to the nation’s history and culture, rather than as a marginal phenomenon. “I challenge the notion,” he said, “that the Klan exists on the outskirts of society.”

The artist also showed how a similarly allusive approach to addressing social issues shaped earlier work such as The Strangest Fruit, a portrait series featuring Chicano men posed as though hanging from invisible nooses. “The rope is no longer visible,” he said, “because today it has been reshaped, repackaged and resold to the American public” in the form of mass incarceration, stop-and-frisk policing and other infringements of civil liberties that disproportionately target people of color.

In a Q+A following his talk, Valdez spoke about the importance of learning new mediums and finding fresh ways to communicate about the world around him. “As soon as I’m comfortable,” he told students, “I scrap what I’m doing and move on to something else.”

Valdez also pointed out that, despite his choice of subject matter, art remains for him a great source of satisfaction and release. “The truth is,” he said, “focusing on such harsh subjects is one of the only things in life that makes me feel free. So it’s really out of my hands.”

Growing up as a Latino in the US, Vincent Valdez 00 IL has always been acutely aware of the stereotypes about young men of color in American society.