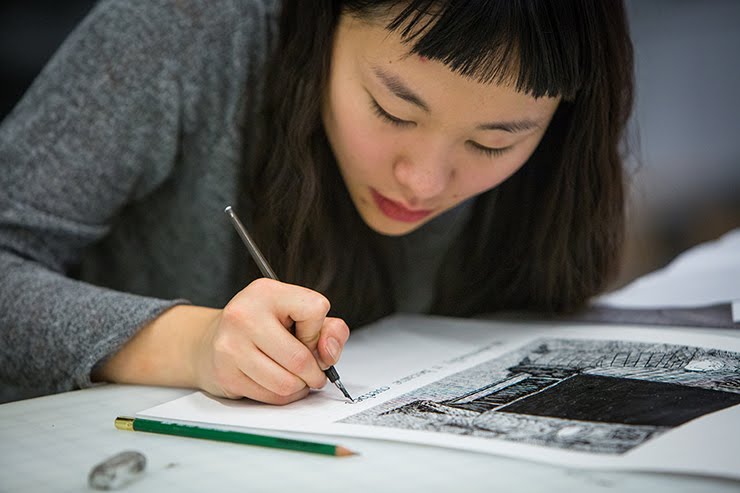 Until fairly recently, comic books—and the stories they tell—were mostly considered lowbrow and uncool or, for a small canon of graphic novels, as literary exceptions that prove the rule. But over the past decade, the illustration-driven medium has powered an explosion of blockbuster films, hit television series and a comic convention scene that continues to grow in size and popularity.

The shift of comics toward the cultural mainstream has also changed the way aspiring creators understand graphic sequential art, says Kikuo Johnson 03 IL (above), an Illustration faculty member who has taught a Wintersession studio called Comics: Grammar of the Graphic Novel for the past eight years. “Comics are fantastic for portraying superhero battles and manga-style fantasy,” says the Brooklyn-based artist, “but fewer and fewer students arrive with the assumption that this is where the medium’s potential ends.” With an emphasis on “the mechanical aspects of visual storytelling,” the course attracts students from a range of fields seeking to sharpen their capacity for building narratives from the ground up, regardless of medium.

“This class emphasizes clarity of storytelling and how to use the least amount of information to make a narrative work,” says Emelie Wang 20 EFS (top photo), a first-year student planning to major in Sculpture. “Comics are as much about what you leave out of a frame as what you put into one,” she continues, noting that this efficient approach to making spans disciplines. Intently replicating the cross hatching of Edward Gorey for an autobiographical storytelling assignment, Wang notes the uniqueness of each hand-lettered character, an observation she attributes to Johnson’s encouragement of careful analysis of existing work by the best illustrators. “Each of [Gorey’s] D’s are different, each of his E’s are different. I learn something every time I write a character [by hand].”

As students transform personal stories into comics inspired by such influential illustrators as Charles Burns, Dave Gibbons and Osamu Tezuka, Johnson conducts one-on-one crits during which he emphasizes the importance of rhythm and the pitfalls of playing to one’s stylistic strengths. “You have such a talent for natural dialogue,” he tells one student, “and you show the actions of each character so well.” But he also notes that her attention to detail lengthens the story unnecessarily and recommends that she cut some panels and combine others. It’s important, Johnson notes, for illustrators not to let what they like to draw get in the way of a well-told tale.

“Narrative is at the heart of user experience,” Johnson says about what comics can teach artists from a variety of disciplines. “So consideration of the user—or in the case of comics, the reader—is the guiding principle of this class.” It’s no surprise, he continues, that the first generation of web UX designers relied on Scott McCloud’s seminal book Understanding Comics for figuring out how to guide users through the new medium.

In addition to current and prospective Illustration majors, students like Wang and Stephanie Trackman 19 FAV appreciate the portable skills Johnson highlights throughout Grammar of the Graphic Novel. For a confident illustrator like Trackman, a transfer student in Film / Animation / Video, the studio is a perfect complement to what she has learned about cinematic structure in her major. In other words, as Johnson says, the course teaches students from all disciplines how to “write with pictures” while exploring the comics medium and its growing audience – an increasingly fertile territory for new voices to tell new stories.