Andrea Pensado is a sound artist and educator. She began playing piano as a girl and obtained her BA in Music Education from the University of La Plata, Argentina in 1987. She then moved to Poland, where she was awarded a scholarship that allowed her to continue her studies at the Krakow Academy of Music. She graduated in Conducting of Vocal and Instrumental Ensembles in 1992 and in Composition with honors in 1995.

In 1997 Pensado moved back to Buenos Aires, and her music started to gradually move from composing to improvisation. In 1998 she cofounded the interdisciplinary duo Qfwfq with Gregory Kowalski and focused on developing live interactive musical systems.

After moving to the US in 2002, Pensado channeled most of her artistic inspiration into Qfwfq until 2009. She currently performs solo and collaborates with many other musicians in all sorts of venues, from regular concert halls to art galleries, clubs, lofts, basements, record stores and house concerts. Recordings of her music have been released by Zeromoon, Feeding Tube Records, YDLMIER, Hidden Temples, Pan y Rosas, LITL, Ayurvedic Tapes, Anathema Archives and FTAM Productions. Since 2010, she has been curating and producing Sonorium, a quarterly series of experimental music in Salem, MA.

Pensada uses Max as her main programming tool and is highly intuitive in her technique. Occasionally the combination of live performance, abrasive sounds, the irrational use of the voice and the inherent uncertainty of improvisation contributes to discoveries of unknown places in her mind. 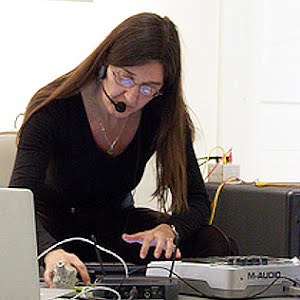