A graduate of RISD, Jim DiMarcantonio started the Hope Bindery in 1988. Since then, he has made his career restoring rare books, producing limited editions, sculptural artist books, corporate presentation bindings and bindings for ceremonial awards. His work is exclusively hand binding. He has made it his mission to be an all encompassing bookbindery without a singular focus and therefore has used his experience to solve difficult problems posed by customers. Whether inventing new types of binding structures or working in unorthodox materials such as latex rubber, plastic, metal and fur, his understanding of tools and materials has made him uniquely qualified to expand the limits of what a book can be.

DiMarcantonio has produced books ranging from one inch square to 45 pound, 24x30-inch full leather photo albums. His box-making skill has allowed him to produce boxes up to 3x6 feet, many that include elaborate inserts. He has restored books dating back to the early 15th century, giving him a strong knowledge of binding history. Some of his more notable clients are the John Carter Brown Library, Brown President’s Office, Neiman Print Center at Columbia University, The Printmaking Workshop of New York, film maker Jonas Mekas, U.S. Senator Claiborn Pell, Boston University, Bruce and Patti Spingsteen, figure skater Michelle Kwan, printmakers John Ross and Claire Romano, New York City Mayor Michael Bloomberg, the Saudi Royal Family, and Reebok/Adidas International. He has been the subject of articles and television shorts. As well as receiving awards for his bindings, his work is in prominent museums, collections, and libraries on five continents. 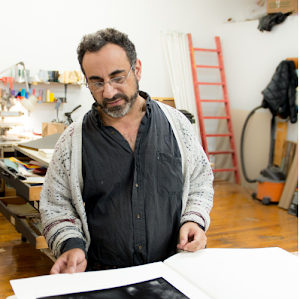