Tom McGrath (b.1978) is an artist whose work can be seen as an attempt at “narrative ecology” in painting. Based in Providence and New York, he has exhibited nationally and internationally since 2002, and he holds a BFA from Cooper Union and an MFA from Columbia University. His writings have appeared in the Brooklyn Rail and ArtLies Magazine, and he has also contributed to exhibition catalogues on Josephine Halvorson, Ryan Johnson, Dana Schutz, Kristopher Benedict and Peter Labier.

McGrath’s work is in such permanent collections as the Metropolitan Museum of Art, the Yale Gallery of Art, Nerman Museum of Contemporary Art, the Wadsworth Athenaeum, the Neuberger Museum, the University of Virginia Museum and the Orlando Museum of Art. He has exhibited in solo shows at Sue Scott, New York; Maruani-Noirhomme, Knokke, Belgium; Lia Rumma, Napoli, Italy; and Zach Feuer/LFL, New York and in two-person shows at Cherry & Martin, Los Angeles and David Castillo, Miami.

McGrath also produced the ceiling of the Alexis and Jim Pugh Theater at DPAC Orlando, working with Barton Meyers Associates/HKS Architects, Artec, Theater Projects Consultants and UCF Flying Horse Editions. He has been artist in residence at the University of Tennessee and the Claude Monet/Versailles Foundation in Giverny, France. He has taught at Brandeis, Columbia University, the School of the Museum of Fine Arts and Brooklyn College, among others; recent visiting artist talks include ICP/Bard, Rutgers and Boston University. 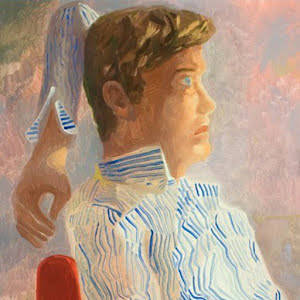