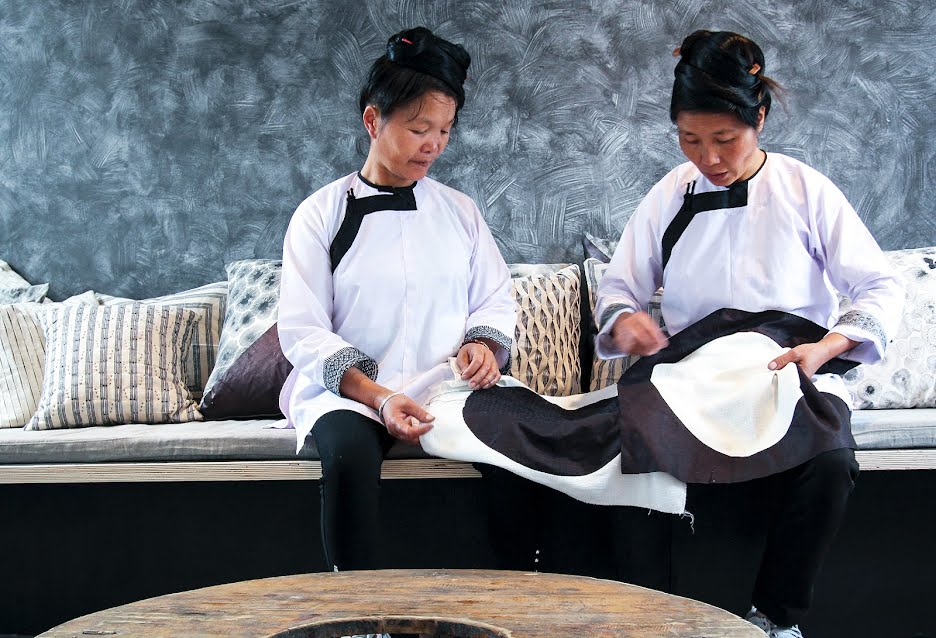 As growing numbers of young people in China migrate from rural villages to urban centers, traditional crafts are in danger of dying out. To counter that, the Chinese government is working with international NGOs to ensure that time-tested traditions are passed down to the next generation via such initiatives as The Dali Project, a platform for exchange with craftspeople living in a remote village in Guizhou province.

Here Catherine McMahon BArch 03 (who leads RISD’s alumni club in Beijing) discusses her contribution to the project and how it relates to the overall mission of ATLAS, the multidisciplinary, Beijing-based design studio she runs with fellow alumni Jenny Chou BArch 04 and Ahti Westphal BArch 04.

What makes running a design startup in Beijing so rewarding?
What’s so exciting about working in China is the existence of ethnic groups whose traditional cultures are still largely intact. Their lifestyles are so removed from our consumer-based culture in the US.

How did you get involved in The Dali Project in southeastern Guizhou province?
The Global Heritage Fund, an NGO committed to cultural conservation, initially invited us to visit Dali, an incredible village high up in the mountains. It’s more than 600 years old and is largely untouched by modernity.

Its people—the Dong—are famous for their skill with indigo, their singing and their style of architecture. Their textiles work and other cultural practices have a ritual, symbolic, social and cosmological significance that goes far beyond a simple agricultural lifestyle.

Are you hoping to learn specific techniques from the Dong?
Ultimately what we want is an opportunity to learn from the people about their culture, way of life and beliefs. We originally planned to engage in a collaborative project that would allow us to spend time there and then share what we learned as part of Beijing Design Week 2016.

How has the project evolved over time?
We started by designing a very simple throw pillow with five variations that we showed in Beijing along with a curated selection of other works in a multi-experiential space called The Dye Room, where we also ran Indigo dyeing workshops.

From there the project took off. We secured long-term funding from the Global Heritage Fund to set up a co-op and are now working with the Dong women, further developing product lines and teaching them concepts of quality control and large-scale production.

Has the Chinese government supported your efforts?
The backdrop to all of this is a major economic push to develop the mountainous terrain of Guizhou province (which is similar to the rural Appalachian region in the US) through investment in infrastructure and ecotourism.

The downside is that this kind of rapid development threatens the maintenance of high-quality craft as opposed to cheap trinkets for tourists.

Have you tapped into other traditional Dong crafts as well?
The Global Heritage Fund also raised money to build a community center in the village, where people interact with outside visitors.

We used traditional carpentry and stone work in collaboration with master carpenters who live there. The building has become a central base for the textiles co-op and was recently recognized by Architectural Digest for its contribution to public architecture in China.

Do you think these traditional techniques would die out without the support of the Global Heritage Fund and others who are working to keep them alive?
The critical issue is transferring knowledge from older generations to younger. Our goal is to make these skills attractive, profitable and valuable so that they’ll continue into the future.

How does this kind of work tie in with ATLAS studio’s overall mission?
What our research projects have in common is a curiosity about nature, landscape, natural materials and cycles of time that have been transformed through traditional practice into complex material cultures.

We want to understand how, throughout history, humans have had deep and direct relationships with the natural world around them—and how we might preserve or modify those relationships to shape the way we live today.

Recent graduates will advance interesting art and design research in Africa, Asia and Europe during the 2019–20 academic year.

Donald Choi BArch 82, an architect and developer in Hong Kong with a long history of service to RISD, is poised to represent the college's 30,000 alumni worldwide.