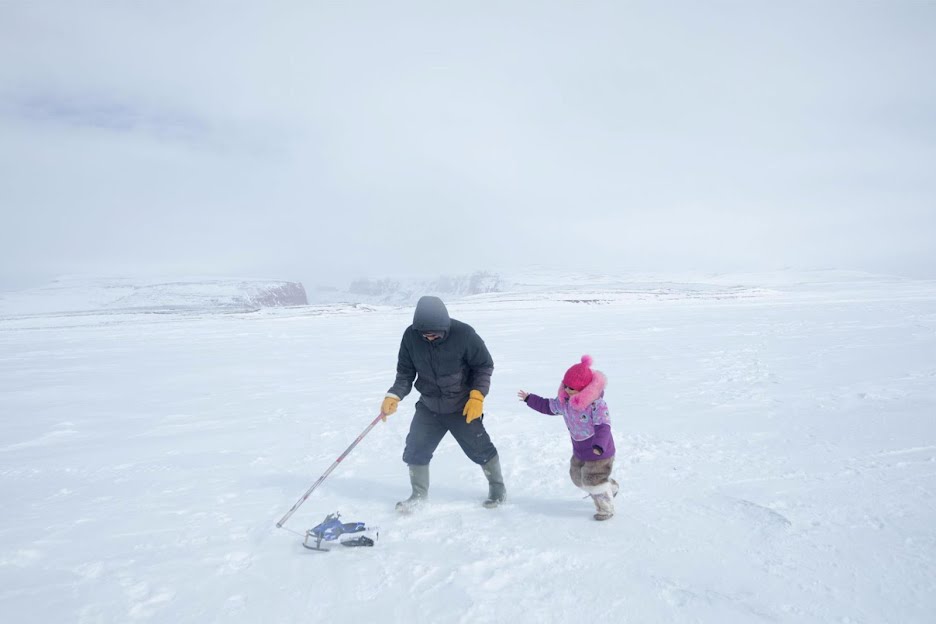 Darcy Enoogoo pulls a toy snowmobile for his daughter, Alana, during a tea break in their nine-hour journey to a fishing lake.

Born and raised in Alaska, Acacia Johnson 14 PH has been photographing the Arctic since she first picked up a camera, making more than 55 photographic expeditions to polar regions and returning home with achingly beautiful visual narratives of native peoples and the natural world.

“In the past three decades, multiyear ice—the thickest (and oldest) type that supports the Arctic marine ecosystem—has declined by 95 percent,” Johnson writes. “Elders no longer can predict safe travel routes on thinning ice, and animal migration patterns are changing.”

Johnson made this latest series of photographs while living with an Inuit community in Ikpiarjuk (Arctic Bay), Nunavut on the north of Baffin Island.

In 2014 she first got to know this community when she lived there for several months over the dark winter as a Fulbright fellow. Since that time, she continues to take a deep, personal interest in the group’s evolving relationship with their rapidly changing environment.

“We hear about the ice disappearing but there’s not a lot of focus on the role that sea ice still plays in people’s lives, cultures and subsistence traditions,” she explains. “Sea ice is a living ecosystem, and one that has supported human life for millennia.”

Another of Johnson’s recent assignments for National Geographic—focused on Alaskan brown bears and the devastating effects a proposed gold and copper mine would have on their ecosystem—appeared in January 2020.

“That’s a story of incredible environmental urgency that hits close to home for my family,” says the wildlife enthusiast whose parents both worked as brown bear guides on the Alaska Peninsula in the 1980s.

“It was a dream assignment and family camping adventure rolled into one,” Johnson says of the six weeks she spent photographing the bears.

She describes the experience as “meditative,” adding that “with people it’s about cultivating relationships and listening to their stories, whereas with animals it’s all about time and patience.”

Johnson is currently earning an MFA in creative writing at the University of Virginia and thinking about future environmentally focused photo essays that will take her to faraway places after she earns her degree.

“I don’t want to limit myself,” she says, “but I do feel a magnetic draw to polar landscapes and have a lot of ideas for more stories about the Arctic.”