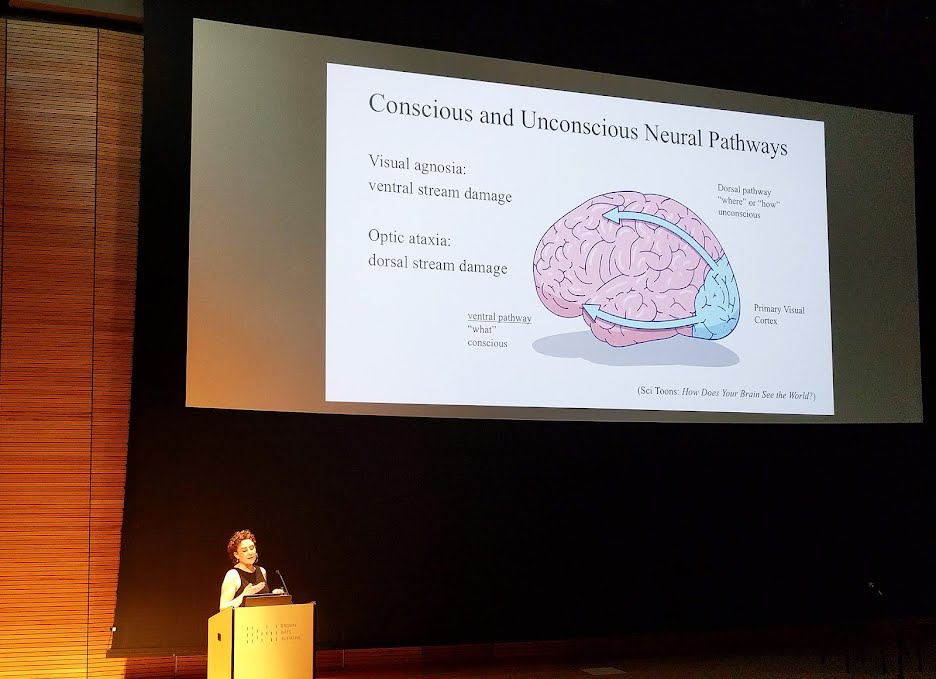 Arguably the only thing more difficult than pursuing a BFA at RISD or an AB at Brown University is doing both—simultaneously. But a small group of brilliant and extremely motivated undergraduates are doing just that—integrating academic and artistic pursuits over the course of five years to develop a unique and cohesive course of study through the Brown|RISD Dual Degree (BRDD) program.

Barry, whose work combines animated films with the study of conscious and unconscious neural pathways, led viewers on an imaginary journey via Friendship, Love and Knowledge in Fake Barn County. Building on the ideas of Edmund Gettier and Christof Koch, the premise of her talk hinged on the notion that visual stimuli—such as the appearance of a bucolic barn in the distance—do not offer objective and reliable truths.

In recent months, Barry explained, her focus has moved from individual to shared consciousness and ideas about reality that celebrate friendship and love. An animator with Brown’s SciToons, she uses her artistic talents to make cutting-edge science research accessible to a wider audience. “The act of storyboarding demands that I learn how to convey information succinctly,” she noted during her presentation. “My hope is that the videos spark curiosity and further questions.”

Like Barry, Pelley earned a BFA in Film/Animation/Video and reflected on the relationship between representation in TV animation and identity formation via a fascinating presentation called Who’s Here for Cartoons? Raised on cartoons in the 1990s, the artist explained that for them—and for many children—cartoons are not just entertainment but “windows to the world while kids are forming a sense of identity.”

Pelley noted that the vast majority of TV cartoons feature straight white male protagonists and promulgate age-old stereotypes about girls and people of color—with two exceptions: Steven Universe, an inclusive Cartoon Network series created by Rebecca Sugar that launched in 2013, and Avatar: The Last Airbender, co-created by RISD alumnus Bryan Konietzko 98 IL and launched on Nickelodeon in 2005. Pelley remembers personally relating to a TV character for the first time when watching Katara in the Avatar series.

Post-graduation Pelley hopes to challenge traditional norms in the animation industry. But as a white person, they worry about the prevalence of systemic privilege in the TV and film industries. “I intend to use my position of privilege to make a difference by taking an inclusive approach,” they affirm.

Kidd Myers, an astute and talented printmaker, also considers the source of information in her studies, focusing on “the entanglements between human society and the biological world.” At a presentation entitled Biology: Culturing Nature, she walked the audience through the evolution of anthropocentrism and how art has helped to shape our historical understanding of the natural world.

Consider, for example, the famous illustration by late natural history painter Rudolph Zallinger of man evolving from the apes, standing taller and becoming more humanoid in each illustration, moving from left to right. “That image is central to our understanding of the concept of evolution,” Kidd Myers explained, “and much of our ‘natural knowledge’—going back to astrology, transmutation, bloodletting, alchemy, etc.—was built on this kind of imagery.”

Kidd Myers pointed out that ideas have history and carry predetermined biases. “Western culture relies on binary categorizations—humans versus animals,” she said, “and my goal as an artist is to destabilize that anthropocentric point of view.”

As RISD’s first-ever winner of a prestigious Angelo Donghia Foundation scholarship, Madison Kim BRDD 17 IA is feeling on top of the world as she wraps up degrees at both RISD and Brown.