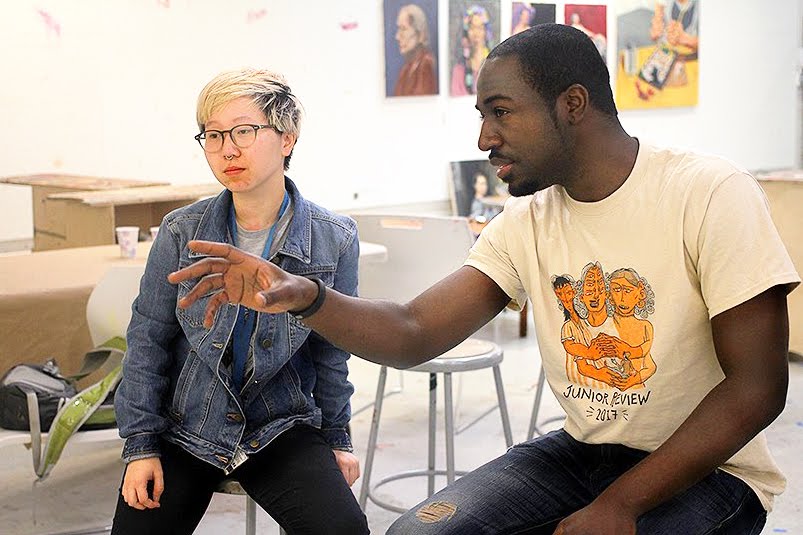 Assistant Professor of Illustration Eric Telfort 05 IL is one of three Rhode Island-based visual artists to win a MacColl Johnson Fellowship from the Rhode Island Foundation.

Telfort’s $25,000 “no strings attached” grant will allow him to take a short sabbatical from teaching and focus on his creative practice.

“I’m driven by the fact that few people who share my particular socioeconomic background have had the opportunities afforded to me to learn how to paint and to contribute to contemporary art discourse,” he says.

“I would like to make good on that privilege by continuing to work at my craft and creating work that can promote meaningful dialogue.”

Telfort grew up in the Little Haiti section of Miami, a neighborhood teeming with sights and sounds that helped shape his vision as an artist. After earning his BFA in Illustration from RISD, he went on to pursue an MFA at the New York Academy of Art.

Telfort is currently working on a graphic novel inspired by the way children play and subconsciously participate in a social system of racial dynamics devised by adults. He’s also examining similar themes through an ongoing series of oil paintings.

“My work speaks to the resourcefulness of children to create in modest conditions and the influence of popular culture and celebrity on that short but remarkable time of childhood,” he says.

The MacColl Johnson Fellowship will give Telfort the latitude to conduct research for his graphic novel in England, Japan and Brazil and to rent a studio space here in Rhode Island where he can create larger-scale pieces and host open studio events that encourage participants to discuss art and politics.

Three other RISD alumni earned finalist and semi-finalist recognition from the Rhode Island Foundation’s MacColl Johnson program. Gabrielle Banks 19 PT and Nafis White 15 SC/MFA 18 PR were awarded $3,000 grants and a two-week residency at the Vermont Studio Center, while Tzu-Ju Chen 00 JM earned a $1,500 grant in support of her work.