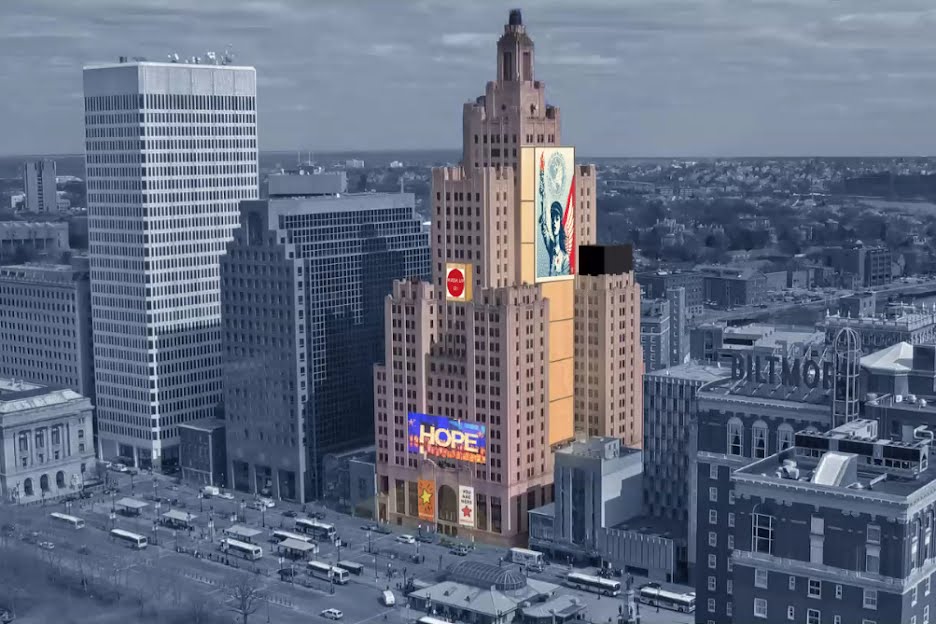 Ankit Mandawewala MA 20 envisions this classic building in Providence as a home for performance spaces with outward-facing LED screens on its facades.

With an iconic building in Providence approaching its eighth year of vacancy, students in a spring studio called Saving Superman focused on bringing it back to life. Built in 1928 at the then-impressive height of 428 feet, the Industrial Trust Building is still the tallest high-rise in Rhode Island and is informally known as “the Superman Building” since it looks a lot like the Daily Planet offices in the DC Comics series. With estimates for bringing the building up to code nearing $150 million, its 26 floors hold both a huge amount of potential and risk for developers and preservationists alike.

“We believe there is great potential in this building,” says Interior Architecture Department Head Liliane Wong. “Working within the spirit of professional practice and respecting the building’s historic and artistic character, students conducted a wide range of design investigations informed by the local community’s social and economic needs.”

Those investigations were at the heart of the graduate studio co-taught by Wong and faculty members Elizabeth Debs and Jonathan Bell. It provided students earning their master’s degrees in Adaptive Reuse with the opportunity to envision bold new alternatives for the long-vacant building. It also allowed them to collaborate with such key partners as the Providence Preservation Society (PPS) and the City Planning Office.

Since students were initially unable to enter the building to conduct research, they analyzed documents from various sources and, just prior to the onset of remote learning in mid March, built an enormous eight-scale model.

At a final critique—conducted virtually on May 22—students presented socially responsible approaches to reviving the building. Ideas ran the gamut from devoting it to the care of elderly citizens to renting the space to the local toy giant Hasbro to turning it into a tourist attraction complete with indoor skydiving and bungee jumping.

Taking advantage of the building’s beefy design, Ankit Mandawewala MA 20 proposes selective reductions in structure that would allow the first few floors to become a series of large theaters and smaller performance spaces. He envisions a jazz bar in the basement, open-air venues at the very top of the building and huge, outward-facing LED screens on the exterior that would serve almost as a drive-in movie theater downtown.

“The thinking behind them is not as sophisticated as the thinking that went into the building’s interior,” he explained. “While they would allow all of Providence to interact with the building—rather than just those who go inside—you need to make that experience more interactive.”

Nameera Najib MA 20 clearly considered interactivity when she conceived of a plan for housing Hasbro’s corporate offices along with an exploratorium or science center in the lower part of the building, complete with a domed planetarium.

Visiting critic and architect Pamela Hawkes (who also teaches at Penn) applauded her “masterful job of layering different program elements,” while PPS Director Rachel Robinson felt that her approach “really communicates how special this building is.”

Taking the idea of family fun to new heights, Hongjia (Mika) Zhou MA 20 proposes a tourist attraction focused on vertical thrills. By turning floors 4 through 14 into one massive vertical space, she could open up space for indoor skydiving, bungee jumping and a huge climbing wall. Critics embraced her bold, revenue-producing approach—along with the quality of her Superman-inspired drawings—but worried about sustainability and how such a large intervention would hold up over time.

The approach presented by Rashmi Ravishankar MA 20 puts senior citizens front and center, reshaping the space into a light and airy assisted living facility with terraced gardens and built-in healthcare resources. Robinson was taken with the “up-to-the-minute” research that went into her design and with the specific details she provided around issues such as air quality and reducing the transmission of viruses.

Although the public gathering planned to showcase the work that came out of the studio was called off due to the pandemic, experts in historic preservation, city planners, developers, historians and anyone else interested in the future of the Industrial Trust Building are invited to visit the website students created to review their detailed and beautifully illustrated proposals.

Overall, they demonstrate a department-wide commitment to thoughtful adaptive reuse and a huge first step in removing the Superman Building from the PPS’s Most Endangered List of properties.

From film premieres to the grad thesis show, graduating students are turning to alternative outlets for showcasing their work.