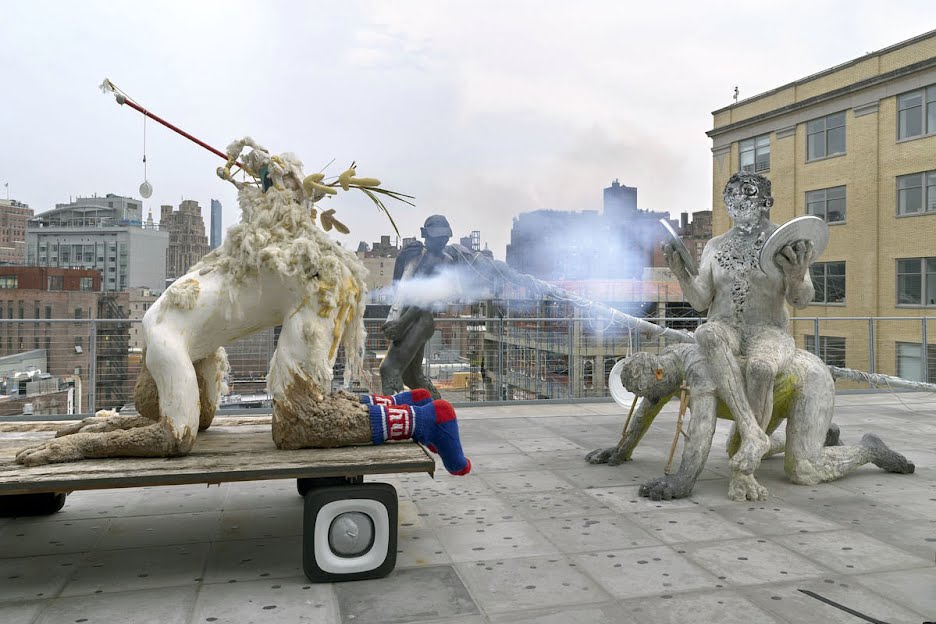 Downtrodden and disenfranchised, the abject figures in Procession caused quite a critical stir at the 2019 Whitney Biennial.

Nicole Eisenman 87 PT had run out to pick up a few groceries in September 2015 when she got the surprise of her life—a call from the MacArthur Foundation letting her know that she’d won a “genius grant.”

And though she knew the $625,000 endorsement would change the course of the next five years, she didn’t exactly anticipate just how much her practice would shift and intensify between then and now.

On October 23 the MacArthur Fellow returned to RISD to give her first big talk on campus since graduating 32 years ago.

In delivering the RISD Museum’s 43rd Annual Gail Silver Memorial Lecture, Eisenman spoke candidly and with a sort of self-deprecating humor, giving an overflow crowd in the RISD Auditorium a glimpse into her creative trajectory, evolving practice and current frame of mind.

In an intensely prolific few years, the Brooklyn-based artist has completed work for both the 2019 Whitney and Venice biennials, along with eight groundbreaking solo shows.

Two of her new sculptural projects that opened over the summer attracted a lot of interest in Boston and Dallas, and in the past three years alone, she has participated in more than two dozen group shows.

This year Eisenman has also been working with curators at the RISD Museum to finalize her contribution to Raid the Icebox Now, a 50th anniversary reprise of Andy Warhol’s fabulous foray into the hidden treasure trove of the museum’s collection to curate his own eclectic exhibition.

For her Raid the Icebox installation, Eisenman—one of eight contemporary artists invited to draw from the museum’s expansive collection of more than 100,000 objects—is focusing on issues of gender, identity and desire through a selection of disparate work ranging from medieval to contemporary times.

In a show she calls Tonight we are going out and we are all getting hammered (November 1–July 19), she’s shedding new light on historic paintings and sculpture arranged to suggest a queer disco in the Farago Wing.

Highlighting gay culture through a mix of two- and three-dimensional work likely felt especially right given Eisenman’s own shift away from painting to focus more on sculpture for the past six years.

In her talk at RISD, she spoke about early forays into 3D work and getting in considerable trouble as a student when she and a friend commandeered an unused studio over winter break to create a series of large-scale found-object sculptures that they covered in plaster and left in place—along with the mess of making surrounding them.

In recalling the partnered prank from the mid 1980s, Eisenman pointed to what she both loved and hated about her years at RISD, when she was still in the closet and feeling totally out of sync with the “white cisgendered male faculty” who dominated the Painting department at the time.

On the plus side: both the seedy accessibility of downtown Providence, where space and materials were abundant and cheap, and the freedom to explore and connect with other students. On the down side: a constrained approach to painting that made her desperate to lash out after graduation.

Rushing to compress highlights from her incredible output over three decades into an hour-long talk, Eisenman showed slides of some of the paintings that have earned her a solid and growing reputation as among the most compelling contemporary artists of the day.

When a student in the audience asked about the humor in her art, Eisenman responded with a rhetorical question of her own: “Do you think my work is actually funny?”

“I think I was funnier in the ’90s,” she then said of her early paintings, “because I was angry,” noting that humor was a way to persuade people to be open to actually looking at her edgy, provocative work.

Though Eisenman claims she’s now less funny than “grumpy (just ask my assistants),” she’s clearly as riled up and fed up as ever—especially given the current political farce in the US.

Procession, the intricate, profane, silly, profound, historically significant rooftop sculptural installation Eisenman made for this year’s Whitney Biennial, has elicited a huge critical response since it opened in May.

In her talk at RISD she didn’t want to comment directly on the biting political nature of the piece, but during the Q+As, she acknowledged that no one is misreading her intentions with every detail of the 53-foot-long “lumpy, dumpy, abject” procession of humanity.

“We live in a political moment that is pornographic,” Eisenman told art critics last spring. “And pornographic politics deserves a pornographic response.”

As for where to go from here, “I want to get back to painting,” Eisenman says in responding to an audience question about what’s next. For her, “sculpture is easier than painting, but dumber,” she says. ”It happens from the neck down. You feel it.”

Painting, on the other hand, “happens from the neck up. It’s cognitive—and manipulative.”

Al-ugh-ories, the first NYC survey show of work by MacArthur winner Nicole Eisenman 89 PT, has been attracting lots of good attention since opening in early May.

With the announcement of this year's MacArthur Award, painter and sculptor Nicole Eisenman 87 PT is the 10th amazing RISD alum to have won a coveted “genius grant” in the past 18 years.